Losing Ourselves at Breakneck Ridge 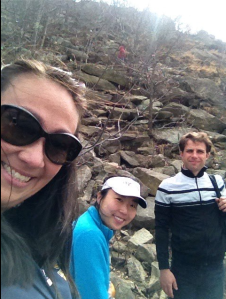 When Freshman asked if she could come visit a couple months ago, I was eager for her to come back to NY. She and I have a long history of going on trips together. Our first trip together was down to Palo Alto to see the Big Game. Since then we’ve hiked Mt. Lassen in CA, driven up to Georgian Bay in Ontario, Canada, and meandered for miles in New York City. I suggested that we go out on a hike on Breakneck Ridge, a mountain range north of NYC (just north of Cold Springs). I usually try to incorporate some sort of outdoor element to our trips. She’s such a trooper that sometimes I’m overly ambitious and we end up going a bit beyond her physical ability. Despite all the difficulty, she did really well on the hike and I’m proud of her.

Eating an apple while climbing

Breakneck Ridge is a strenuous hike The most popular starting point is the white-blazed Breakneck Ridge Trail, where you climb straight up for a couple of miles. And when I say up, I mean up. I did the hike last year with my friends and had my app track our miles. The app only kept track of horizontal distance, not elevation, so it thought I wasn’t moving up.

We followed the driving directions founds here: Detailed description of the hike. After driving through the tunnel, we looked out for the parking lot and trail head. There a very small parking lot right by the trail head. Unless you get there early (we arrived around 10:30 am), it will already be full. Several people will park along the freeway, but if you go a little farther up, there’s a slightly bigger parking lot that usually has some spots available. Of course, on warm spring and summer weekends that parking lot also fills up quickly.

The trail head is easy to find mostly because of all the hikers you see swarming to it. There’s usually some congestion on the trail as you’re climbing up. It’s not a hike, as much as it is a rock scramble, which I love. Freshman was a little dubious about her ability to climb, but we coaxed her by saying that we had plenty of time and it wasn’t important to be in a hurry. There are several sections where we clamored over rocks with not a whole lot of security. We relied on momentum to propel us over treacherous inclines. Although there are several low scrubby trees, there isn’t much shade. Wear a hat and bring lots of water if you’re climbing on a warm day. The rocks soak up the sun’s rays and provide additional warmth. We were there on a sunny, but slightly cool day. So the warm rocks were a pleasure to climb on, but I remember from last year thinking that I was going to bake from the heat radiating off the rocks.

There are three main peaks that you go up as you follow the white blazes. You can’t see all three peaks at once, so it seems as if the highest peak isn’t much farther as you’re climbing. This site has a really nice description and pictures of the hike (Description of the hike). Once you get to the highest peak, you have a couple choices. If you want a longer hike, you continue following the white blazes. If you’re ready to turn back, you follow the yellow blazes down. The trail system is quite extensive as you can see from the trail map of Breakneck Ridge. I found the trail markings to be adequate. It’s not as well-marked as I would have liked and at times it’s quite confusing, but with a little bit of luck and knowledge, you’re all right. I lucked out the first time when I went to Breakneck Ridge and ran into a guy who knew the entire system inside out. My friends and I didn’t have a map (bad idea), so he gave us a map and then explicit directions of how to get back down. His words to me turned out to be very valuable once more on this trip.

We had a map, but frankly it was useless because it was quite poor. Once we got to the top, we followed the yellow blazes down. The climb down is steep in this section, so don’t think that the rock scrambling part was over. At some point, the three of us got lost exactly at the same point where I lost with my friends last year. You know how I know this. I remembered the crumbling wall and abandoned stone structure from last year. We went too far downhill. At this place on the yellow blazed trail, it’s easy to fall into the trap of keep going downhill because there’s a well-worn path (created by other lost hikers) going down to the stone wall. If you hit the stone wall, you went too far down. You need to go back up to the yellow blazed trail and actually go uphill a bit.

As we were heading back up to the yellow blazes, we ran into a couple who were lost and not sure where to go. They were convinced that we had all missed a turn off point and continuing with the yellow blazes would be a mistake. They decided to backtrack. I remembered from the last visit that the guy who had given us the map that told my friends and me that the trail would go back uphill and we should continue on the trail even though we wanted to go downhill. Eventually the trail would go back downhill again. I relayed the message from my memory to Ben and Freshman and after a short discussion, we decided to go with my memory.

We climbed on. As crowded as the trail is going up to the summit, once you go down, the crowds disappear quickly. We rarely saw another hiker, while going up, we were never alone. Near the juncture where the yellow blazes meet the red blazes, we saw another group of hikers who confirmed we were going the right way. Just before you turn right onto the red blazes, you cross a small wooden bridge. Depending upon the time of year, there may be a flowing stream underneath it. 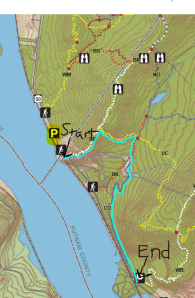 The hike that we did

At this point the trail is now fairly smooth and flat. We walked along. We asked the hikers how far it was to the parking lot and they directed us that we needed to take the blue blazes and it wasn’t much farther. So when we saw the blue blazes, we switched over. Our mistake was not clarifying which parking lot. The hikers directed us to the more southernly parking lot, which took us farther away from our car. We should have stuck with the red blazes. We ended up about two miles south of our car. Oops.

Cindy was really exhausted, so Ben and I left her at the parking lot and we hoofed it to our car. We had to go through the tunnel that we drove through earlier, which is a little spooky, but it was all right.

I don’t know the total distance that we hiked, but I’m guessing it was around 6 miles total. Although we were out for about 4-4.5 hours, a good portion of the time was spent sitting and resting. If you’re a strong and fast hiker, you can definitely do this is much less time. We honestly took our time doing this trail and took many breaks. Breakneck Ridge is a really fun hike and next time I hope we get to go on some of the other longer trails.

3 thoughts on “Losing Ourselves at Breakneck Ridge”