Name of the race: The Course Awakens: Toy Drive 5-Miler

My friend, Kevin M., founded the Queens Distance Runners, a running club in Queens in order to unite the runners of the borough of Queens and to bring more runners to Queens through races. I try to support his events as much as possible. Being that the new Star Wars is about to come out, he decided to host a Star Wars themed race and a toy drive for the Queens Centers for Progress. 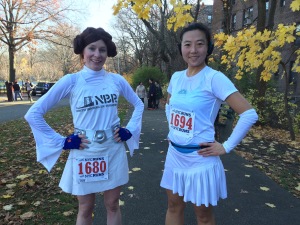 I was very much inspired to show up as Princess Leia and created the cheapest Princess Leia running costume on the face of  this earth. I wore a white race shirt (inside out so the logo on the front didn’t show as much) and a white tennis skirt that Ben bought for me a long time ago to encourage me to continue running. I made a pair of white arm warmers by cutting an old t-shirt that we were about to throw out anyway. I cut long rectangular pieces along the sides of the shirt (under the sleeve) and then used fabric glue to close the “seams.” I went to a fabric store to buy a $4 skein of brown yarn that I braided. I coiled the braid, and used more fabric glue to keep the braid coiled together, to create two “Princess Leia buns.” The buns dried overnight and then I safety-pinned them to a pair of earbags. Voila! Crafty Princess Leia buns. I wasn’t the only runner showing up as Princess Leia. It was fun running with so many of us. Whenever I saw one out on the course, I was mentally cheering, “You go, Princess Leia!” Normally I don’t like being beaten by other runners, but I didn’t mind when it was another Princess Leia. We, princesses, need to stick together!

Ben wondered if he should do a costume. He didn’t feel like dressing up as Hans Solo, so I suggested that since he’s so hairy that he should run shirtless and then tell everyone that he was a Wookiee. Then I fell over laughing my own joke. Ben didn’t think it was nearly as funny as I did. He had to put up with me bursting into fits of giggles throughout the day as I thought about him being a Wookiee. He tried to quiet me by saying that he wasn’t nearly tall enough to be a Wookiee, so I responded with, “Fine, you’re an Ewok then.” Sometimes Ben deserves an award for putting up with me. Ben would say that he always deserves an award for putting up with me.

There were several runners in costumes. Many were quite impressive replicas. Ben and I were impressed with the runners who committed to running in their full-blown Storm Trooper costumes or with the Darth Vader masks. By the time they crossed the finish line, they were drenched with sweat. My own costume worked pretty well. It was comfortable and easy to run in. I started running with my buns, but after a mile, I had to take them off because the additional weight of the braided yarn tugged on the earbags threatening to fall off with each pounding step. I pulled them off and stuffed them into Spibelt.

The field for the races hosted by QDR is small, but always very speedy. It’s really impressive the depth of talented runners that they attract. When we started, I knew better than to chase after the front runners. I slowed down and concentrated on running at my own pace (and admiring other people’s costumes). The course is a 1.25 mile in-and-out that we do twice. After the first in-and-out, I threw away my running glove because I was getting warm. The gloves were off! The race was on!

The Force is strong in me!

The course was out in Forest Park in Queens, where we did the Mexico Fiesta 5-Miler. For some strange reason, I Paul Ryaned my 5-mile PR and thought I ran a 38:XX. This false memory affected my running strategy quite a bit. I wanted to PR, but I didn’t think I had it in me that day, so I decided I would just try to go for sub-40. My Garmin always measures this course a little short, so I was actually running faster than I thought I was, which I didn’t realize until I was about 100 feet from the finish line. When I saw the race clock, I realized that I was significantly under 40 minutes and I sped up. I crossed with a time of 39:16. It wasn’t until later when I was at home and looked up my PR and saw that it was really 39:11 that I groaned. If I had known, I could have ran a bit better and PR’ed by a few seconds.

Regardless, my time was good enough for 3rd place in my age group. I got a cute little trophy. If you’re in the NYC area, you should do a QDR race because they seriously have the BEST awards for a small race. The overall winners got a huge trophy. The top three winners also get additional prizes, such as gift certificates for local Queens restaurants. There was a raffle with cool Star Wars paraphernalia as prizes. Kevin and his team work really hard to put on a quality race. It helps that Kevin is an avid runner because he knows what matters to runners in a race.

Ben and I got to meet a couple of other PPTC members, who were super speedy and also won for their age groups. Technically this is our first race as PPTC members, but I’ll feel more like a member of the team when I buy an official PPTC singlet to wear at races.

All the Princess Leias

Is this my Hans Solo? Ben says no. 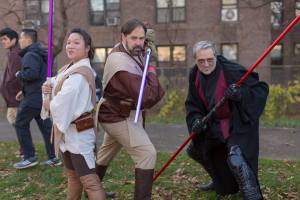