Spring Half Marathon PR at the Verrazano Festival of Races 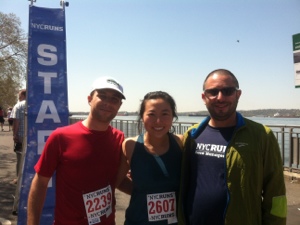 Ben, me, and Steve (NYCRuns)

Name of the race: Verrazano Festival of Races – Half Marathon

Saturday morning was a beautiful day for a running festival. The Verrazano Festival of Races was supposed to be held last November, but the destruction caused by Hurricane Sandy required that several fall races be delayed or canceled altogether. Ben and I had originally registered for the 10K in the fall. When we received word that the racing festival would be held in the spring, we were absolutely delighted. We both needed a spring half marathon, so we decided to sign up for the half marathon.

There were three different races: 5K, 10K, and half marathon. The 5K and 10K were held at 8 am. Ben and I drove down to Brooklyn. It was a quick drive because there was no traffic that early on a weekend morning. We didn’t have much trouble finding a parking spot a couple blocks away from the start line. As we walked over, we could see runners running toward the finish line. The sun was out and there was a view of the ocean. It was a glorious day for a race.

I was particularly excited about this race because Ben and I biked on this portion of the bike path when we did the Century Ride last September. I thought the views and the path were lovely and I commented that I wanted to run here. It’s a bit of a drive down from Astoria, so this race was the perfect excuse to run there. The course is really flat and scenic because of the ocean views to one side. It is quite sunny with very little to no shade.

It already felt very festive because of the runners from the 5K and 10K coming in and spectators cheering them on. After we checked in, we stood by the finish line to cheer some of the runners as well. We were very impressed with how well organized the race was. Check-in only took a few minutes. We very much appreciated that we could pick up our bibs the day of the race, instead of making a special trip all the way out to Brooklyn. There was lots of food out. Ben helped himself to half a bagel with cream cheese before our race since we had an hour to kill. We arrived rather early, but because of all the excitement and fun, time flew. Next thing we knew, Steve (one of the heads of NYCRuns) announced over the bullhorn that the half marathon was about to start.

It was a rather small field, so the “seeding” was done very informally. Steve asked who planned on running at

which pace and you suitably lined up. Even though my intention was to run a 8:30 pace, I deliberately lined myself up with the 9:00 pace “corral” so that I wouldn’t start out too fast. Normally I would run with my Spibelt, but I forgot it at Ben’s, so I was using a Banjees wrist wallet to store my IPhone. I set my Runtastic app, slipped the phone in the wallet, and waited for the horn to blast. Then we were off.

As usual I ran off with everyone and panicked a bit because I was scared that I was starting too slowly. I don’t know why I always fear this because I can assure you that in all of the races that I’ve ever ran, I started too slowly in exactly 0 races. That’s right. Never. So why do I panic over this? I dunno. I thought I was running too easily and despite the very tempting feeling to run faster, I held back and used a couple of girls in front of me as my “pacers.” I refused to let myself run faster than them.

Reluctantly I let the two girls in front of me go and deliberately slowed myself down even more. I worried about being too slow, but I reassured myself that running more slowly in the beginning would results in my not burning out later.

The half marathon course was one smaller 5’ish-mile loop and then a longer 8’ish mile loop. So we ran out about 2.5 miles before turning around and running back to the start/finish line, and then you head out for the longer loop. The nice thing about this set up, despite the fact that I’m generally not a fan of in and out courses, was that I got to see Ben three times during the races. A negative of this type of course that it does play head games with you when you see the Mile 12 marker when you know you’re only at Mile 3. Water stations were set up at the first turn around point, near the start/finish line, at the final turn around point. I personally was fine with the number of water stations, but some runners thought that there should have been one more water station between the first turn around point and the last turn around point.

I slowed myself down and tried to run a slow first mile. I saw the lead bicycle coming in the other direction, so I looked out for Ben. He saw me first and yelled, “Hi honey!”

At some point a little after the first turn around point, a group of three runners (whom I nicknamed the three amigos) ran past me. I could tell that they were running about a 8:30 pace, so I decided to use them as my pacers. I let them get about 20 feet ahead of me and stayed there. This turned out to be a great strategy. Over the next few miles I didn’t have to worry about whether I was keeping up my pace. I could just zone out and run. Even though I was getting a bit more fatigued with each mile, I could easily keep an 8:30 pace because of the three amigos.

It was a really sunny day and though the temperature was in the 50s, it was feeling quite warm. I was grateful that I was wearing my Headsweats visor. It kept the sun and sweat off my face. We had a nice tailwind heading out, so I got a bit of a boost whenever I was running out.

When I saw Ben for the third time around when I was between Mile 8 and 9 (although at the time I thought I was between Mile 7 and 8). He was walking and yelled, “I’m broken.” I knew that he was all right, but something happened to him running-wise (like he started too fast). I wasn’t worried because I figured at the very worst, I would catch up to him and he would finish with me. By this point, I was having a harder and harder time keeping up with the three amigos. They were slowly pulling away from me. By the time I reached the water station and turn around point, I knew I could no longer keep up with them and I was on my own.

I did a smart thing at a water station. I drank water as I ran past the farthest water stop on the course. The turn around point was slightly past the water station. As I was running back  toward the water station, I got water again by croaking, “Water!” The volunteers were really focused on handing water to runners running in the other direction, but one volunteer heard me. He put down the Gatorade that he was holding and rushed out with water for me. I gratefully gulped down another cup and dumped the second cup of water all over my head. Cooling relief.

Now I was at Mile 9. I had lost track of the miles and was a bit surprised to see the Mile 9 marker. I thought I was going to see Mile 8. I was so relieved that a mile magically “disappeared.” I know I ran it, but mentally it’s so much easier knowing that you ran more than you actually did than the other way around. I was getting really tired and focused on surviving each mile.

I ran to Mile 10 by looking at runners ahead of me. I slowly passed a couple of them. Some runners passed me, but I focused on keeping myself together. At Mile 10, I thought, “It’s just a 5K more.” There were a couple of female runners where we took turns passing and getting passed by each other. When I saw the Mile 12 marker, I tried to run a bit faster and at the last .6 miles, I ran as fast I possibly could. Ben found me with about .2 or .3 miles left to go. He yelled out the gun time and told me that I had enough time to make it under 1:54. He had a cup of water for me, which I gratefully drank. Then with his loud cheers and the crowd support to keep me going and to run fast, I shifted into my “kick” and ran to get under the 1:54 time.

A new HM PR by 1 minute and 47 seconds. Although I didn’t meet my goal of 1:53, I’m very satisfied with my performance. I put in a really good hard effort. It was a solid race. I won’t make my New Year’s goal of running sub 1:50 by the spring, but I’ve known this for a while. I revised my New Year’s goal to do the 1:50 in the fall and I think I’m in a good place to get this done.

Ben’s time was 1:30:25. Despite walking for a couple of minutes, this was still one of his better HM times.

After the race, we sat down at the picnic tables with post-race food and talked to other racers. When we felt a bit better, we got our stuff from bag check, cheered on a few racers, and slowly made our way back to the car. Later we got famished and had a late brunch at Sanford’s in Astoria. In the late afternoon I was still feeling sluggish, so I rehydrated with lemon tea Nuun and an orange. Aaah! Hit the spot.

We both loved this race and NYCRuns. NYCRuns knows how to put on a good quality event for not much money. Their events are always very reasonably priced (even quite cheap) and they have a fantastic system where you volunteer for one race and get a free entry to another race (with a few exceptions). At the finish line, there was tons of food, so even if you came in much later, there was enough for you. The bagels from Terrace Bagel in BK were the good kind – thick, chewy, and hearty. The staff and volunteers were helpful and well-trained. We never experienced any sort of problems or trouble. There was, however, a problem with the 10K. The course was unfortunately cut short (I think the lead bike turned too early), so NYCRuns offered the 10K runners free entry to another 10K run that they’ll host later this year. In terms of number of racers, it’s a small race, but it still feels like a good crowd of people. Ben and I sat down at a picnic table to recuperate and talked to other racers. The results of races were posted on the NYCRuns website (and app) later in the evening.

We both had a lot of fun and we would be very much interested in coming back again next year.