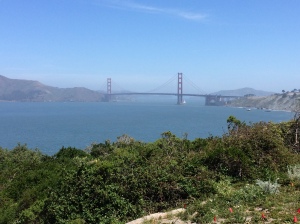 If you ever think you have seen everything that you can see in San Francisco, if you haven’t been to Land’s End, then you haven’t seen San Francisco. From the moment I arrived to this northwestern outpost of the city by the bay til I left, my jaw dropped and remained open in awe.

It was a beautiful bright sunny morning and I got to enjoy spectacular views of the Golden Gate Bridge. The previous day I enjoyed incredible views of the the bridge from Crissy Field. You’d think I’d be used to the beauty. Nope. From Land’s End, it was even more majestic. The photos don’t do it justice. There were several benches that were promptly taken up by hikers and daytrippers to sit and just marvel and take in the sight. These days I often see people absorbed in their phones, not paying attention to their surroundings. That wasn’t happening here. People were quietly sitting and really taking it all in. When I first arrived, I promptly stopped because I was so stunned by the vista. I didn’t even think to take a photo until several minutes had passed. After I snapped a few, I still lingered and sat around to take it all in.

I can’t believe I hadn’t known about Land’s End for all those years that I’ve lived in the Bay Area. I feel quite cheated. Like I didn’t really know SF. And now that I do, I can’t have her because I’m in NYC.

Then I hiked about three miles to my final destination – Sutro Baths and Cliff House Restaurant. Because I had time and was not in a hurry, I took side trails to explore Land’s End. I followed the signs for Mile Rock Beach. After a going down several steps, I was rewarded with crashing waves on rocks, a labyrinth, and more great views. Several people were there, but again it was still pretty quiet. When you’re in the presence of majestic beauty, we all were inclined to be quiet and simply soak in nature. I sat on one of the many washed-up logs for a few minutes.

I adored the trail at Land’s End because it’s right next to the coastline. Every moment of the hike you have a breathtaking view. 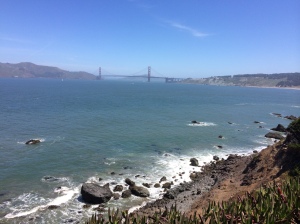 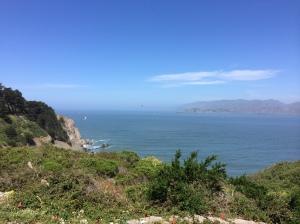 The trail leads to Sutro Baths, an abandoned and ruined former public baths and pools. You can still see the foundations of the various pools. It’s right next to an iconic San Franciscan restaurant, Cliff House, where its spectacular views of the Pacific Ocean and great food make it a popular choice for weddings. I looked around for one last look at the crashing waves of the Pacific Ocean.

Although I didn’t run, Land’s End is a great place for trail running. There are several other trails that I hadn’t explored and I saw several runners during my hike.

16 thoughts on “Hiking to Land’s End in San Francisco”