Nothing like having an out-of-town guest that makes explore the city. For the last few years, one of my best friends from grad school has been making an annual visit to see me in New York City. Even though he lives in London now, we see each other regularly because his family lives in Pittsburgh. After he visits them, he comes over to NY to spend a few days with me.

He’s been to NY several times so now we try to find quirky and off-the-beaten path things. Although the holidays are over, the holiday decorations are still up. We walked up and down the streets to look at the store windows ornately decorated for Christmas.

What was especially fun was seeing the tiny dioramas (actually they’re pretty large) of various scenes in the Lego Store at Rockefeller Center. They even recreated the Rockefeller Center. The level of detail is really amazing. I played with legos as a kid and I never did much except build crude houses, but I sure had fun while doing so. Serendipitiously we discovered that in a few minutes the Cartier Christmas Light Show was going to occur.

I’ve seen light shows like before and I’ve always enjoyed them. They project lasers onto the building and a little show unfolds. In Paris, I saw such a show for Bastille Day on the Eiffel Tower, which was incredible. They made the tower appear as if it were dancing and twisting, shrinking and growing. The light show at the Rockefeller Center was a light-hearted affair and fun to watch. We were pleased to have caught it. I wish I had more information about this, but I can’t find any online.

I found out about the 11th Annual Holiday Train Show at Grand Central (through Feb 10th), which I thought would be fun. I love miniatures and miniature trains for whatever reason really capture my attention. While the piece certainly is fairly large, it wasn’t really all that interesting. Although I liked the replica of Grand Central Terminal and how they had underground tracks, somehow the whole piece was lackluster. I did think having King Kong on top of the Empire State Building was a cute touch.

Eh, it was free and we were in the general area anyway. If you happen to be around Grand Central and have a few minutes to kill, it’s not bad to take a gander. 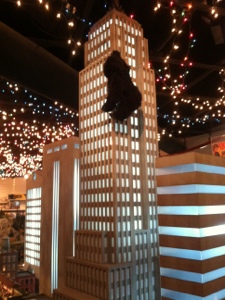