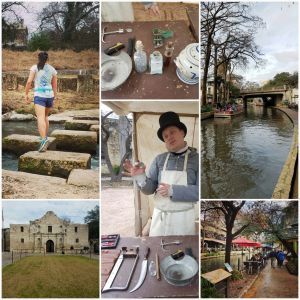 After our Boulder adventures, we flew to San Antonio. We stayed at the Double Tree by Hilton and we were quite surprised and pleased by our accommodations. It’s located about a mile away from downtown San Antonio, which is a long walk, but the weather was nice, so we weren’t aggrieved by the idea of a walk. Much to our delight, there was a shuttle that took us downtown and picked us up when we were ready to go back. Also the warm chocolate chip walnut cookies that they give you at check-in (and whenever you ask) are aces.

We flew to San Antonio because Frontier had a cheap flight and our friend, Hector (the one who came in 15th at the 3M Half, also if you look up the results, Hector is not his real name) lives in San Antonio. I hadn’t seen him since he moved back to Texas and Ben last saw him two years ago when Hector and Kelly ran Chicago, so it was really good to see him. He picked us up for dinner and then took us on a brief tour of San Antonio.

Chances are if you’re visiting San Antonio, it’s probably for the Alamo. In my US History class, the section on the Alamo and Texan history was about 5 minutes long. I vaguely remembered a few details (like everyone died, in reality, only the men, with the exception of Joe, a black slave, died). The history of the Alamo is fascinating and visiting is free. We watched a 20-minute movie about the Alamo and there was also someone who gave a fascinating oral narrative. My favorite part of the Alamo was the exhibit on medical tools. Someone dressed up as a doctor would have in those days and explained what the various tools were and the illnesses and injuries that the soldiers in Alamo were likely to have faced. Because of grad school (thanks, neuroanatomy class!) I already knew quite a bit. Ben got alarmed when I expressed a little too much keen interest in the trepanation tool that bored holes in the skull. (I thought it was really cool to see one because although I read about it, I had never seen such a tool outside of a textbook.) Because of the Alamo, our interest in Texan history was piqued, so the next few days we did an extensive reading about it, especially about when Texas joined the US. Even if you’re not a history buff, I recommend seeing the Alamo.

Our bus ride to Austin wasn’t til the afternoon, so we took advantage of the morning to go running on the San Antonio Riverwalk. The riverwalk is a 15-mile long bike and pedestrian trail that goes along the San Antonio River. The most well-known section is the stretch that goes through downtown. It’s the most touristy part lined with restaurants and cypress trees, but it’s charming in a hackneyed kind of way. From late morning to evening, this section of the riverwalk is filled with people, mostly tourists, walking. There are long sections of the riverwalk away from downtown that’s much quieter. Ben and I really liked the riverwalk. Admittedly it’s far more picturesque than the multi-use paths in Boulder. As we ran, we continually exclaimed how pretty the riverwalk was. Because we were running fairly early, we even ran through the downtown section because it was devoid of people. We ran about 5 miles total at a slow tempo pace. Running at sea level after a week of altitude was a lot easier. If you ever find yourself in San Antonio, please do run on the riverwalk. It’s a great place for some urban running.