At Per Se’s door

For weeks, Ben had been driving me crazy with “a special dessert surprise.” Originally we were supposed to have had this for my birthday, but frankly the tasting menu at Aquavit left us both stuffed. Then we thought we might go for New Year’s Eve, but Ben said that the place had a different NYE celebration going on, so we couldn’t go for dessert. I suggested that we save it for our one-year anniversary because that seemed to be the perfect time to go.

I wanted a quiet anniversary celebration because by the time January rolled around, we were both tired by the sheer number of celebrations that have been going on for months. First my birthday in October, followed by Thanksgiving in November, next are Ben’s birthday, Christmas and New Year’s Eve in December, then came our anniversary, and finally there’s Valentine’s Day in February. I thought by having the special dessert surprise for our anniversary, we could have something special to do without having to do something additional to what we had already planned on doing anyway.

Ben took me out to a light dinner at Xai Xai, a South African wine bar, first. I really had no idea what was going on. I knew we were going somewhere for dessert, but had no clue what it was. I thought maybe we were going to Chikalicious or Ayza Wine & Chocolate Bar. I couldn’t have been more off.

As we walked, I just grew more and more puzzled until I realized that we were going to Columbus Circle. Then I cried, “Oh, we’re going to Landmarc!”

I got confused again and became silent. We took an elevator up to the 4th floor of Timer Warner Central. Ben led me to the iconic blue doors and I realized where we were.

“Per Se! We’re at Per Se!” I shrieked with excitement and disbelief. For a moment, I was in fear that this was some terrible joke and at any second, Ben was going to lead me away.

He looked really pleased with himself that he managed to keep this whole thing a surprise until he took me right up to the door. Yes, we were at Per Se, which is on my wish list of places I want to eat in my life. Some people have bucket lists for things they want to accomplish in life. I have a bucket list for places I want to eat.

The Per Se experience begins from the moment you step through the hallowed doors. It’s service unlike any other place that I’ve experienced in my life. A hostess greeted us and inquired the reason for our visit. Ben answered that we were there for the dessert tasting menu. The five-course dessert tasting menu is only allowed in the salon and you cannot make a reservation for it. You simply show up and hope for the best. At 7, the salon was full and unfortunately they do not take down names. So for about an hour we hung out at a bar just outside of Per Se. Ben kept walking back to get status updates and finally they let us in. This was the only frustrating part of Per Se. We’re fine with them not taking reservations, but they really should take down names of people who do want to eat at the salon so that we don’t have to traipse back and forth.

First the hostess took my winter coat. We briefly sat at the glass bar while they cleaned up a table. The seating in the salon is really beautiful. If you’re lucky, you’ll get the table that’s right in front of the window, so you have a magnificent view of the city. While we didn’t get that table, our table was rather close to the window, so we could see out as well as people watch.

A waiter welcomed us and asked (without really asking), “Are you here for the dessert tasting menu?” He already knew what we were here for. This is the first example of the exemplary level of service that’s at Per Se. The hostess had already communicated the reason why we were there. The waiter handed me the dessert menu and Ben requested the dinner one for himself.

The dessert menu constantly changes and you can see that the menu offered in the spring differs from what I was offered a couple weeks ago. Ben isn’t into sweets, so he opted to have a halibut entree while I had the dessert tasting menu. I started off with two mini ice cream sandwiches in lieu of the gougeres that you’re offered with the savory menu. The ice cream sandwiches were refreshing and light.

Because Ben was having a savory entree, they gave us a bread basket (pretzel, levain baguette, and rolls). Thoughtfully they gave us extra bread for me in case I wanted to share some bread with Ben. Being a carb-fiend, I couldn’t resist eating each type of bread after slathering it with sweet butter. We both preferred the roll and the baguette over the pretzel bread, which was too bland and lackluster.

Little cornettes arrived as a palette cleanser. I got some sort of sweet one, while Ben’s was savory. The cornettes signaled the start of the feeding frenzy. Unfortunately I don’t remember the names of the desserts for two courses and I can’t find the current menu online. But my recollection of the desserts were that each one was better than the last. I kept on telling the waiter that “No, now this one is my favorite.” 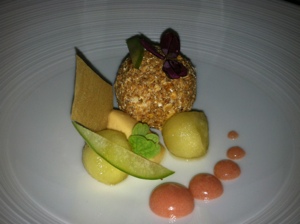 Each dessert was so intricate and beautifully prepared. They were works of art on their own right. I liked the balance of flavors and how none were too sweet and were complex mix of tart, sweet, soft, crunchy, crispy, smooth, and textured. Ben and I were blown away by the ice cream in two of the courses.

While each course was a small portion, it turned out that it was exactly the right size because of the intensity of flavors and because of how many courses you received. I can’t remember everything I ate, but I did greatly savored the experience of dining at Per Se. Each bite was a gustatory adventure.

Two of the courses had ice cream in them, which were incredible. The first ice cream I had was in a banana themed dish, but the ice cream was not banana flavored. I can’t exactly describe it, but it was so smooth, creamy, and light. Even Ben couldn’t help himself and had a second taste of it. And a third.

Finally the last course was the celebrated and famed Coffee and Doughnuts (cinnamon-sugared doughnuts and cappuccino semifreddo). Amazing! The doughnuts were so light and fluffy, like airy puffs of fried dough. I hadn’t had donuts like this in a long time. The semifreddo was unbelievable. Delicious chocolate-y and coffee flavor. Again Ben stole little bites of it (the fact that I let Ben steal bites tells you how much I love him). Seriously, I could have sat there all day eating nothing but this. Coffee and Doughnuts was hands-down our favorite. You cannot go to Per Se and not have this.

I thought that last course, that the experience was over. But no, it was not! We kept on getting more!

A waiter sauntered over and offered us 24 different kinds of house-made truffles. Originally I thought we could only get one each, then he informed us that we could have as much as we wanted. I wanted the entire box, but I refrained myself by only getting three (hazelnut, coffee, and grapefruit). I was curious about the pairing of chocolate and grapefruit; I just couldn’t imagine it. But out of the three, that one was my favorite. Somehow it just worked.

Again after the truffles, I thought it was over, but Per Se had one last surprise for us. They gave us both a package of four lemon shortbread cookies with chocolate fillings to go. The cookies were beautifully packaged in cellophane and a ribbon with the words Per Se on it. The cookies were marvelous. We ate the cookies for our afternoon snack when we were in Miami.

As we sat and nibbled on the cookies, we reminisced about our time at Per Se. The level of service and professionalism at Per Se is unparalleled. When we finished, we were allowed to sit and enjoy being there for as long as we would like without any attempt to hurry us out. Reluctantly we got up to leave. A staff member who had been quietly sitting by the hostess stand saw us and scurried away.

Ben remarked, “I bet you he went to go get your coat.”

Sure enough by the time we reached the hostess stand, there he was with my coat in hand. They helped me put my coat on. This whole interaction was a bit like magic. I didn’t have to say a word about wanting my coat. It was immediately brought to me when they anticipated that I would want it. I didn’t have to say which one it was. They just knew. The staff member who got my coat was not the one who took my coat. Again, this is another example of the level of detail, organization, and professionalism that makes Per Se stand out among establishments. Per Se isn’t simply for eating. It is for the entire experience of being treated like royalty without the overbearing pomp and circumstance of kowtowing.

Per Se was everything I thought it would and more. I can’t wait to go back for their full dinner tasting menu some day.