Name of the race: United New York City Half Marathon

Where: From Prospect Park in Brooklyn to Central Park in Manhattan

Hey, there! Think I quit blogging? It feels good to be writing again.

Brief life update: Last year I received a promotion that included a whole new slew of responsibilities, most of which came all crashing down on me these last few months. Basically I was busy with my day job since I haven’t monetized this blog or figured out how to leverage my IG without showing my butt or posting endless selfies of me holding the number of fingers corresponding to the number of miles I ran that day.

Back to more fun stuff – like what the heck happened at the United Half!

Ben and I, in different years, ran the old NYC Half Marathon, when the route was entirely in Manhattan. In the “old” days, the NYC Half started in Central Park, when through Times Square, and ended at Wall St. Then, like now, the race entry was a million dollars (not really, but seriously, this is THE MOST EXPENSIVE HALF). I had a good time, but it was a one-and-done race for the both of us. We each wanted the fun and experience of running through Times Square without all the hordes of tourists.

Last year, NYRR changed the course, so that it started in Brooklyn and ended in Central Park. You still go through Times Square, but now, the race literally starts in my backyard – Prospect Park and goes over Manhattan Bridge (a bridge that my running club regularly runs over). This race was OUR race. Of course, we had to do this race.

We entered the lottery and didn’t get picked. Boo!

So, how did we end up doing the race? We didn’t bandit. We had legit bibs. NYRR occasionally has a few bibs that they can give out for sold out races (for example, if a sponsor doesn’t take all their allotted bibs, then NYRR hands out those unused bibs). NYRR contacted all the local NYC running clubs to ask they had members who wanted non-complimentary bibs. When I heard about those bibs, I tossed our names in, not thinking we would get them, but we did!

With a few weeks notice, we were doing the United NYC Half. This was not a problem for me, as I’m always in half marathon shape, meaning I can run a half (not necessarily PR). It was more problematic for Ben, who hasn’t been running much in the last few years. Ben asked me to run with him and of course, I agreed after all those races, where Ben sherpa’d me to victory. It was finally my turn to pay him back.

I adore races that start in Prospect Park. It’s so close to my house. I get to stay in bed a little longer, even when the race starts early. I get to enjoy a leisurely morning for race morning by getting to sleep in my own bed, drink coffee, and then stroll out my door and within in minutes, I’m at the start line. It’s bliss.

We ran into a few teammates before the race and we chatted about our various goals. Some wanted to PR. I wanted to have fun. Ben just wanted to survive.

Oh, I was also wearing a red-and-white tutu. Red and white because those are the colors of my running club. A tutu because I promised that if we were picked to get those non-complimentary bibs, I would make and wear a tutu. I am a woman of my word.

The pleasure of running a half at non-race pace cannot be overstated. Even though I don’t necessarily race every half, I do use a lot of halves as workouts, so I’m still running quite hard. At that point in time, I had a lot of residual fitness left from marathon training, so running around an 8:30 pace for a half was quite easy. I was absolutely having an absolute blast running easy in a tutu, and waving to all my friends who were spectating.

There was a large group of teammates who were waiting for us a few miles in at Flatbush Ave. My friend, Unnie, laughed as she told me later at how happy I looked (I was blowing kisses) while Ben already looked as if he was on a death march. They were used to seeing me look like I wished I were dead already, so seeing a happy smiling Elle running in a race was a novelty.

The hardest part for me was the Manhattan Bridge. Neither Ben or I gave much thought about the bridge when we signed up, but as we ran down Flatbush toward the bridge, it suddenly dawned on me that thousands of runners were not going to be funneled onto the pedestrian pathway that we normally use for crossing the bridge. Fine, we were going to go on the road where the cars would normally be. Considering how much we paid for our race fee, I wanted a few roads closed for runners. The question was, which part of the Manhattan Bridge were we going to run?

Our prayers weren’t answered. We were going over the upper deck! Onward to the CLIMB-O-DEATH! It wasn’t fun. By the time, we made it up, I was totally winded and annoyed by all the runners who ran to the edge of the bridge to take selfies. Anyway, it was pretty cool to be on the upper deck and see the vast views of Brooklyn and Manhattan, but I prefer this view when I’m in a car. It’s a lot easier to climb then. Ben survived. 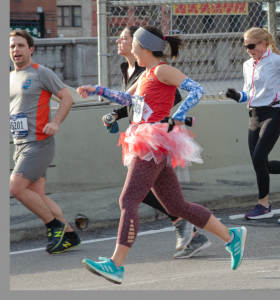 The run down the other side of the bridge was fun. I knew another friend would be waiting there, so when I saw him, I ran wide to I would wave to him. He snapped this photo of me and Ben. When he sent it to me, he sent it with the words, “Ben’s already deeply regretting his decision.”

This was also the photo I sent to my coach to let her know what I was doing for the race. Earlier that week, I said I wasn’t sure if I was going to fun run it or use it as a workout and that I would make my decision that morning. Definitely not a workout!

The aid stations were quite crowded, so Ben by-passed all of them because he had me! I weaved in and out of the crowds to grab us cups of water and then I sprinted to catch up with Ben. It brought back memories of Ben doing the same for me.

I breezily answered, “Sure, you will!” I kept him going. He got a bit of a second wind in Times Square. The end in Central Park is a bit deceptive. You run into Central Park and you know the end is in Central Park, so you think the finish line is quite close. In reality, you still have a bit more that you need to run. Ben lost it when he realized how far we were from the finish line, but I coaxed him and got him to sprint the finish so we could come in under 1:52.

We held hands across the finish line and best of all, I heard Karla announce our names!

We ran into a few more teammates as we got our stuff at bag check. Because of all the exertion, Ben wasn’t feeling 100%, so I hurried us home. Luckily for us, we could get a direct train from the finish line, so we made it back home quite quickly.

In the afternoon, we went to a bar where our club was having its Half-ter party. it was fun to catch up with people. The club is so big that it’s quite possible to go for months without seeing some people if your running/training schedules don’t align, so these social events are a good way to maintain ties.

I know this is probably one of my less interesting/bad race reports, but because so much time has passed, I don’t remember much about this race and I have a few more race reports that I want to get through.

I’d like to blog once or twice a week for the rest of summer and then I’ll see what I have time for the rest of the year. But I miss blogging and interacting with everyone.