Miracles of miracles! I actually finish writing about a vacation.

JP’s Coffee House in Cantwell: If you’re driving up to Denali, you MUST STOP HERE. Cantwell is a hamlet (possibly it’s large enough to be considered a village, it does after all, have a post office) that’s about 35 mins south of the Denali National Park entrance. It’s on the right hand side as you’re driving north. A longtime Cantwell resident and his wife from Louisiana decided to renovate an old gas station and inn into a bright and modern coffee house that makes just about the best darn savory handpies that you’ll ever eat! They opened in July 2017 and the reviews for this place are out of the world; one five-star review after another on Yelp and Tripadvisor. After taking one bite of their ground turkey and veggie handpie, I knew why and the five-star reviews are no lie!  They open at 8 am. I absolutely recommend stopping here for a coffee and breakfast, or taking the handpies to eat for lunch at Denali. My only regret is that I found out about this place as I was leaving, so I only got to eat here once. I still think about those handpies. 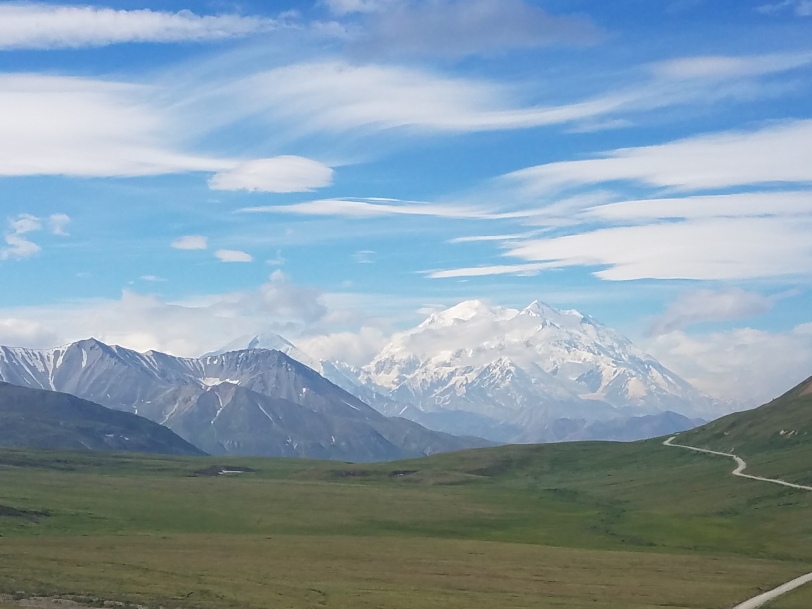 Because of their concern for preserving wilderness, visitor access is quite limited at Denali National Park. You’re allowed to drive only up to Savage River Trailhead unless you have one of the coveted permits (i.e., you work for the national park, you’re a researcher, an artist-in-resident, or you won the car lottery for one of the three or four days they allow personal vehicles). Traveling in the park is not a problem because they have an extensive bus system for moving visitors around. 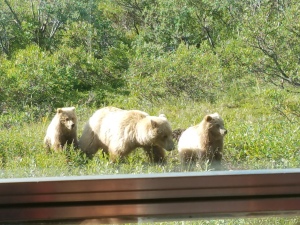 Tundra Wilderness Tour: I booked us an early morning tour of the Tundra Wilderness Tour, which takes about 7-8 hours. They take out out to Mile 62 (Stony Overlook), which if you’re lucky (and we were!) you get a glorious jawdropping view of Denali. I chose an early morning tour because reviews said you’d see more animals in the morning. Again, we were super lucky and got to see several brown bears (including a mama bear and her two baby cubs up close by the bus), moose, caribou, dall sheep, ptarmigans, snowshoe hares by the dozen, and several species of birds. They provide you with a small snack pack (and plenty of water) so bringing a lunch for yourself is highly encouraged. Call the Denali Bus Depot (aka Wilderness Access Center) the day before to see which bus they’ve scheduled you for (depending upon demand there are various shuttle buses and morning buses leave between 6:30 am and 7:30 am).

Hiking: As much as I would have loved to do some backcountry hiking, I could only do the shorter tamer trails because I was traveling with my parents. I did the Taiga Trail & Horseshoe Lake Trail twice (once in the early morning as a run, I added a little bit of another trail to make it 5 miles) and again in the late morning as a hike with my parents. If you stick to just the Taiga & Horseshoe Lake Trail as an out-and-back, the hike is 4 miles long. The trails are beautiful and well-maintained, non-technical trails. They’re popular, so as the day goes on, you run into more and more people. In the early morning, I only saw a few people and they were running like me. Taiga & a good portion of Horseshoe Lake Trail has you going through woods. Obviously with a name like Horseshoe Lake, you do travel around a lake and there’s an opportunity to see a very large beaver dam. We weren’t fortunate to see any beavers though. The trails were flat-ish with some hills. It took us three hours to hike this trail because my parents were walking very very very slowly and we took lots of breaks. I was waaaaaay more tired after the hike than I was after running because even though we were walking (with some sitting), three hours is a long time to be on your feet. I passed out and took a long nap when we got back to our AirBnB. There were other trails and you can even go on a ranger-led hike that you can read more about in the link at the start of this paragraph.

You will see several bald eagles in Juneau. I remember driving past a tidal marsh and it was basically a field of bald eagles feasting during low tide.

Mendenhall Glacier: A beautiful glacier north of downtown Juneau and a few minutes away from the airport. There are several viewpoints that will give you a lovely dramatic view of the glacier. We hiked on Nugget Falls Trail (2 miles roundtrip), which took us to the base of Nugget Falls and a closer look at Mendenhall Glacier. There are several trails in the area and all seemed wonderful. Fee is $5 per person. 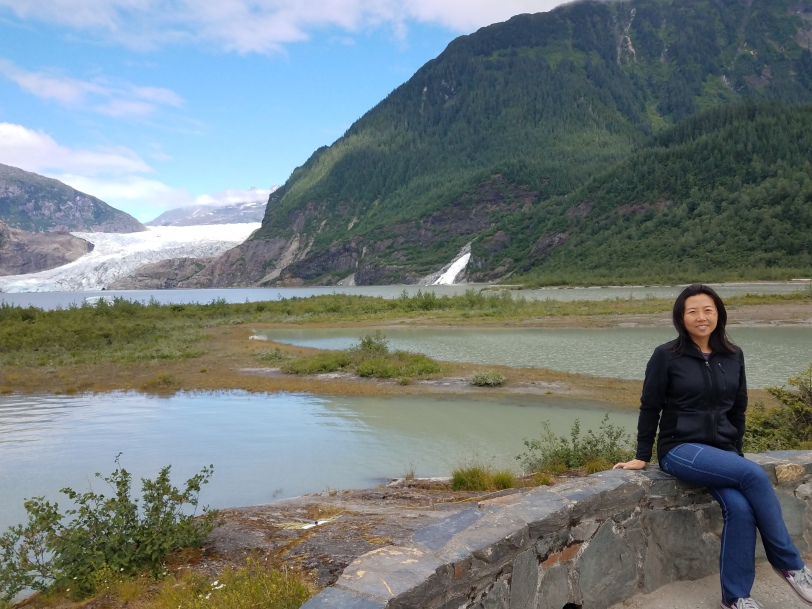 Macauley Salmon Hatchery: We’ve visited a few different hatcheries, but this was by far the biggest and best one. We saw a ton of salmon, salmon swimming up the salmon ladder, tiny baby salmon (fry and smolt), and there was a brief talk about the life cycle of the salmon. It was really cool and well worth the $5 per person entry fee. They also give you free coffee.

Tracy’s King Crab Shack: They advertised themselves as having the best legs in town and they don’t lie! Go to Tracy’s for the long succulent juicy legs of Alaskan King Crab. Sorry, Maryland, your blue crabs don’t do much for me. I grew up eating crabs from Alaska, so it tasted of my childhood. We ordered the Large King Crab Bucket for $125, which came with 6 legs, cole slaw, rolls, and drawn butter. Pricy? Yes, but totally worth it. The original location on the waterfront is a bit of a tourist trap, but I love proper crabs so much (King crab and Dungeness) that I don’t ‘mind.

We were in Gustavus for one night because we wanted to go on another boat tour to see more glaciers. I really want to recommend the AirBnB that we stayed at (Blue Bucket Inn) because we had such a great time and Robyn was so sweet. She met us at the airport to drive us to the bed-and-breakfast, the next day drove us to the dock in Bartlett Cove and then drove us to the airport. Our room was very comfortable and large and we had a private bathroom. We shared the living room, kitchen, and dining room with other guests and with Robyn and her father. She baked us cookies and urged us to take oranges or whatever else we needed.

Glacier Bay National Park: We took the 7.5 hour day boat trip. We saw one or two humpback whales, several puffins, other birds I can’t remember (sorry, Linda), two black bears, a family of brown bears, a raft of sea otters, and a colony of sea lions. The national park ranger told us about the history and geology of this area, and the animals. Depending upon the conditions, the boat goes to either Margerie Glacier or Johns Hopkins Glacier. We did the former. We lucked out because as we were leaving Margerie Glacier, we got to witness a spectacularly huge calving! It was a good boat trip. The food wasn’t as good. We got sandwiches and a bowl of clam chowder. The national park is incredibly beautiful and my mom and I loved just watching hours and hours of water, mountains, trees, animals, and other scenes from nature go by.