Name of the race: Newport 10-Miler

Swag: Technical t shirt, free race photos, and a video of you at the finish

Weather: 57 degrees, 77% humidity, 7 mph eastwind (basically a headwind all along the ocean)

The stately mansions of the seaport town of Newport, RI evoke the sumptuous resplendent lifestyles of the well-heeled in the Roaring 20s. Indeed, the original movie of the novel most closely associated with that time period, F. Scott Fitzgerald’s The Great Gatsby, was filmed in Newport. Along with the beautiful homes and gardens, the sweeping views of the ocean, Newport is an incredible place to run and to have a race.

I’ve been dying to do this race and the Newport Half for a while, so I was very much looking forward to this quick jaunt to the Ocean State. We had a leisurely Saturday morning where we drank coffee and read our paper before driving four hours to Newport.

We had lunch at The Black Pearl in downtown Newport. The parking situation in downtown Newport is ridiculous. The parking lots are expensive. The street parking is difficult to find. We only ate at the Black Pearl because we lucked out in finding a spot just after we made the decision to drive away. Ben and I feel that in every city or town that attracts a significant amount of tourism, there’s an area that specifically reserved for tourists and no local goes there. In NYC, it’s Times Square. In Newport, I feel it’s the wharf area where The Black Pearl is. The food at The Black Pearl was fine. I ordered clam chowder because I was dying to have some and I chose this restaurant specifically for their chowder. It was fine, but certainly not nearly as good as all the ads and reviews had made it out to be. The entire area felt rather touristy, so we knew we had to do better for dinner.

After getting the bib pick up from the local high school, we drove to South Kingston where our AirBnB apartment was. The host gave us a wonderful suggestion for dinner, Manutuck Oyster Bar. It was exactly what we were looking for! Wonderful fresh seafood right by a marina. Ben and I watched couple of herons fishing for their own seafood dinner. I ordered a stuff lobster, which was absolutely delicious. I loved that they left the lobster meat chunky. No matter what you order, the portions are huge, the food is really delicious, and everything is well-priced. The warm buttery rosemary dinner rolls are to die for! After we scarfed down our basket, they brought us another one, which I couldn’t finish because I was so full from my “stuffed sea bug.” I couldn’t bear the thought of those delectable rolls being thrown out, so I took them home in order to have them for a pre-race breakfast. We had a drink with our dinner (Ben ordered the special), and watched the sun set over the marina. It was a wonderful meal and a lovely night.

Race morning was an early one. The race director warned us about traffic because there’s only one road in and out of Fort Adams. The race started at 7:30 am for the first wave, but I decided to get there at 6 am. South Kingston is about 50 minutes away, so we had to leave about 5 am, which meant I had to wake up at 4 am in order to go through all of my pre-race routine. Even at 6 am, there was a line, albeit a short one, to get into Fort Adams. Ben shook his head and said, “Imagine how long the line will be 30 mins from now.” We thought it was odd that we were directed into the parking lot that was the farthest away from the start line when we got there early, but after the race we realized that it was the best lot for a quick getaway after the race, when the congestion gets REALLY CRAZY. It’s definitely better to park in the closest to the exit out of Fort Adams.

Although it was 57 degrees, the ocean breeze made it feel cooler, so Ben elected to  wait in the car while I went out for a two-mile warm up. I discovered a bathroom with short lines during the warm up and it was close to where we parked our car too. With all these people, nearly all of the indoor bathrooms (for the women) quickly got overwhelmed with huge lines. I also discovered that the bathroom in the visitor’s center actually had two entrances and the entrance that’s outside had the shorter line.

Around 7:20 we got inside the corral for the first wave. The national anthem was sung. The gun went off at 7:30. We were off and running. Ben’s original intent was to run with me. Because I had just returned from a long trans-Atlantic flight, I wasn’t 100% sure what my legs had to give. I wanted to run a 7:50 pace, but was okay with doing something between 8:00-8:10 if that’s all I had. My legs felt good and I thought I could hold onto the 7:50 pace. After a couple of miles, Ben said that he would meet me at the finish line. After a long period of away from running, Ben only recently started running again. He wasn’t feeling it and decided to back off and enjoy the run.

The Newport 10-Miler (or the Amica Newport Half/Marathon) is absolutely a race you MUST do if you’re in the East Coast. It is absolutely one of the epically gorgeous courses in the world. It’s definitely the most jaw-droppingly beautiful course that we’ve ever run. You have miles and miles of scenic ocean coastlines. The views from the interior aren’t shabby either as you run on streets lined with those incredible Newport manions that I told you about. Or at least that’s what I was told. By the time we ran through the billionaires’ neighborhood, I was really tired and not noticing anything, but Ben assured me that the manions were amazing. 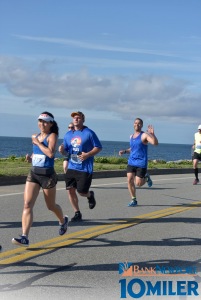 Around Mile 7, I felt myself flagging, so I rallied up whatever strength and speed I had left to keep on pushing. I was doing rather well, until at Mile 9.4, all of a sudden I had to STOP and dry heave. The feeling came out of nowhere. Nothing came out, but my heart was crazily beating fast. I drank some water that I had with me in my Simple Hydration bottle, breathe in some long calming breaths, and collected myself. Once I calmed myself down, I ran again. Interestingly I was able to pick right back up to the previous pace and crossed the finish line as if nothing had happened. 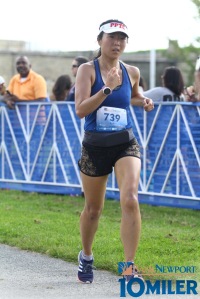 I was really excited about my time 1:17:29 until I looked more carefully at my Garmin to notice the distance measured – 9.85. Well short of 10 miles. I asked some runners around me what they got and they all confirmed that the course was short. I even went online to see if the course was certified (it wasn’t). Had the course been the full 10 miles, my time still would have been about a 3-min PR. My last 10-mile PR was set in 2014 at the DC Cherry Blossom 10-Miler (1:20:38). I ran a very solid race on untapered legs and after a long flight, so I was very happy with how well I did.

Ben rolled in about 10 minutes after I did. I don’t like beer, so I gave my free beer to him. Ben walked back to the car, I ran two very slow miles for a cool down. Getting out of Fort Adams is crazy after the race. My recommendation if you ever do this race is after you’re done, flee! Which is a pity because the ocean views by Fort Adams is really pretty, so you’re tempted to lollygag. Had we been fully aware of just how bad it would be, I would have done the cool down later at home. And keep in mind, we didn’t have it as bad as other people because we were in the good parking lot.

To anyone on the East Coast, please put Newport 10-Miler or the Amica Newport Half/Marathon as a part of your race bucket list. It’s a beautiful, beautiful course and Newport is a fun and interesting area. We didn’t get a chance to do much in Newport, but I’ve been here before with my parents. If you love architecture and fine living, it’s hard to beat Newport.