Fork in the Road “5K” Race Report: Choose Your Own Adventure

Name of the race: Fork in the Road 5K

I had my day planned out to the minute on Friday – attend work meeting, go home and pack, leave for JFK where I would take a flight to Toronto for the weekend, where I would have a weekend of racing, working with my collaborator, and catching up with a few friends. It all went according to plan.

My flight was leaving out of LaGuardia – the OTHER airport in NYC. Because I fly so frequently out of JFK, I hadn’t bothered to check which airport my flight was out of and assumed I was flying out of JFK. I stood there stunned staring at the board with the horror gradually dawning on me that I was at the wrong airport and my flight was about to leave in one hour. Because of traffic, it takes one hour to get to LGA from JFK. There was no way I was going to catch that flight.

I called Ben in hopes that he would be able to get a customer service representative to rebook me on one of the many later flights to Toronto that night while I frantically drove to LGA. They were unable to help Ben/me over the phone, and advised him/me to rebook at the airport. I found a sympathetic customer service representative who kindly rebooked me to Toronto through Montreal because all the other direct flights were sold out. At this point, I didn’t care and was just grateful that I was going to Toronto at all.

I arrived at the Pearson International Airport Toronto close to midnight because of the various delays in the flights. There was a strong windstorm over Toronto that also affected Montreal to a lesser degree, so my flights were delayed. By the time I got to my friend, Alice’s home, it was past 1 am. I was dead-exhausted, but absolutely committed to doing this trail 5K.

I don’t remember how I found out about this race, but once I did, I knew I was going to do it one day. The timing of this event worked out nicely because it was the day before the Goodlife Half Marathon, so I used it as a shakeout run.

Fork in the Road 5K is called this because unlike most races where there’s a set intended route for you to run, there are points (aka forks) along the course where you did to decide which direction you’re going to run. Choose correctly, and you run the shortest possible distance to the next fork. Choose incorrectly and you add distance or additional elevation. There are seven forks. Choose correctly all 7 times and you run a 5K. Choose incorrectly all 7 times and you run a 7K. The event takes place on a 200-acre family tree farm, so every year the course changes.

I was super excited to do this race and even more excited when I found out that there were several forks. I originally thought that there would be only one or two forks, but having seven meant that we were going to be running wildly different courses. Before the race, I had no idea if I wanted to choose correctly so that I would run a short correct distance of 5K or if I wanted to choose incorrectly because then I would have a longer, lovelier run through the woods. I finally decided that it didn’t matter because every choice would be the right choice in the end.

The trail was non-technical for the most part. There was some elevation changes and a few places where it was so steep that just about all of us power hiked up instead of running. I did take a little bit of a look around to enjoy the woods and the view, but most of the time I was too busy scampering to notice all that much. Not to mention, I was busy trying to decide which direction to go at a fork, and then I spent a lot of time wondering if I made the right decision.

The course has two loops. When you finish one loop, you go through the start/finish area again. This was helpful in that I knew I was about “halfway” done. I don’t remember which decision I made for all the forks, but I do remember I decided left for the first fork. The other fork was the last one. At the last fork, I had to decide between sticking with the beautiful groomed non-technical trail or taking a leap of faith and going down a gnarly steep technical trail. Right before I came to that fork, a woman caught up to me and froze with indecision. She didn’t know what to do. I saw the two decisions and thought to myself, “What would I do as the race director?” I decided impulsively that I would reward the runners who chose the more difficult trail by making it the direct one to the finish line. With that, I hurtled myself down the mountainside. I heard the woman groaning aloud and treating the fork as if it were her Scylla and Charybdis. Finally I heard branches breaking behind me, so I knew she made the same decision I did.

Within a couple of minutes, I knew I made the right decision. It was the shortest route to the finish line. I smiled so broadly as I finished the race. It was hands down THE MOST FUN RACE that I’ve ever done. At most races, you compare times, but at this race, runners compared distances. I ran 3.4 miles, which I think is not bad, considering that I could have ran up to 7 km. I never had so much fun as I did when watching the Strava fly-bys for this race. You get to see what other people ran and see the Strava avatars catch up or lose ground to other runners based on which fork they took. I wish this race was closer to home so I could do this every year. 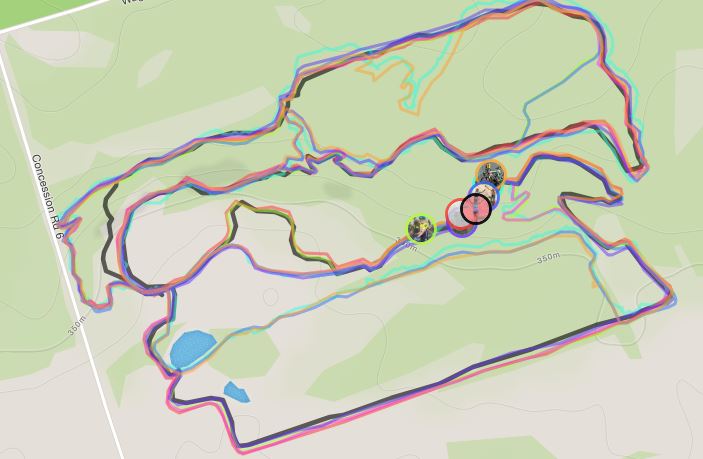 I hashtagged this race as #chooseyourownadventure because no matter what you chose, you were going to have a grand time. There was no wrong choice in this race.

While I was in Toronto, I asked Ben to look up what happened to my original flight. Another PPTC teammate who was doing the Toronto Marathon was supposed to fly out to Toronto Friday night, but her flight was delayed and cancelled because of the windstorm. Apparently it disrupted several flights. She was rebooked for a flight Saturday morning.

It turned out that the original flight that I was scheduled to be on, although it was the only flight to depart “on time,” it never actually left LGA. It sat and waited, until finally it was cancelled. Had I been on that flight, I would have been rebooked for Saturday morning because there were no flights to Toronto that night. I would have missed this incredible trail 5K. It was a most fortuitous error. This goes to show you that sometimes in life, even when you make the wrong decision, it still ends up being the right choice after all.

Have you ever made a stupid mistake like me and have it turn out to be the right thing to do in the end? Or do you have any other stupid missed flight stories? I have several. It’s embarrassing really how many I have.

13 thoughts on “Fork in the Road “5K” Race Report: Choose Your Own Adventure”