Gazelle vs Glider Running Style: Or I Run like a Racewalker

I have a clear vivid memory of a time when I was at my college’s gym, on a treadmill (either running to burn calories or I was training for Bay to Breakers, can’t remember which). At the time I was a novice runner; I didn’t run any faster than 6 mph and I certainly never ran outdoors (literally Bay to Breakers was the first time I ran outside since I was a kid). As I was about to start, a tall sleek lithe runner stepped onto a treadmill and started running. Running isn’t the right word to describe what he was doing. Unlike other people on a treadmill who lumbered, sweated, and looked uncomfortable, he was light, nimble, and was filled with grace. For the first time, I understood what “ran like a gazelle” meant. While running, he transformed from a man to a fleet-footed gazelle with his muscles rippling under gleaming ebony skin. We all stopped to gawk at him because his running was a thing of beauty. To this day, I have never seen anyone who ran as lightly and as beautifully as that unknown track star.

Some years ago, I came across this video of running style, “Ironman Run Technique – Gliders vs. Gazelles.” It’s 24 mins long and worth watching because it describes in detail the two major styles of running: gliders and gazelles. The runner I described above is a gazelle, with a smooth flying stride. I, on the other hand, am a plodding glider.

The classic characteristics of a gazelle are the height and airtime (or flight) from toe off to landing. Gazelles spend more time traveling through the air than gliders. This is the form that elite marathoners have. Gliders travel low to the ground with less flight time. Their legs skim closer to the ground, unlike a gazelle who picks up their legs with a high knee drive. A glider’s speed is pretty much limited to their stride length because there is so little air time while running.

Like many runners, I don’t like many of my race photos. Not because I don’t look “cute” because OMG, I’m not smiling and instead I look like I’m working. I don’t like several of my photos because thanks to my running style, more often than not, I’m captured in a stance that I call “Crouching Elle, Lumbering Runner.” See below for evidence.

These were taken in different years. My ungraceful style has not changed one iota.

I look like I’m about to pounce, whereas several of my friends have that pretty “Look! I’m in flight!” pose with both legs up in the air. And in the rare times that I do get a non-crouching pose, I look like this: 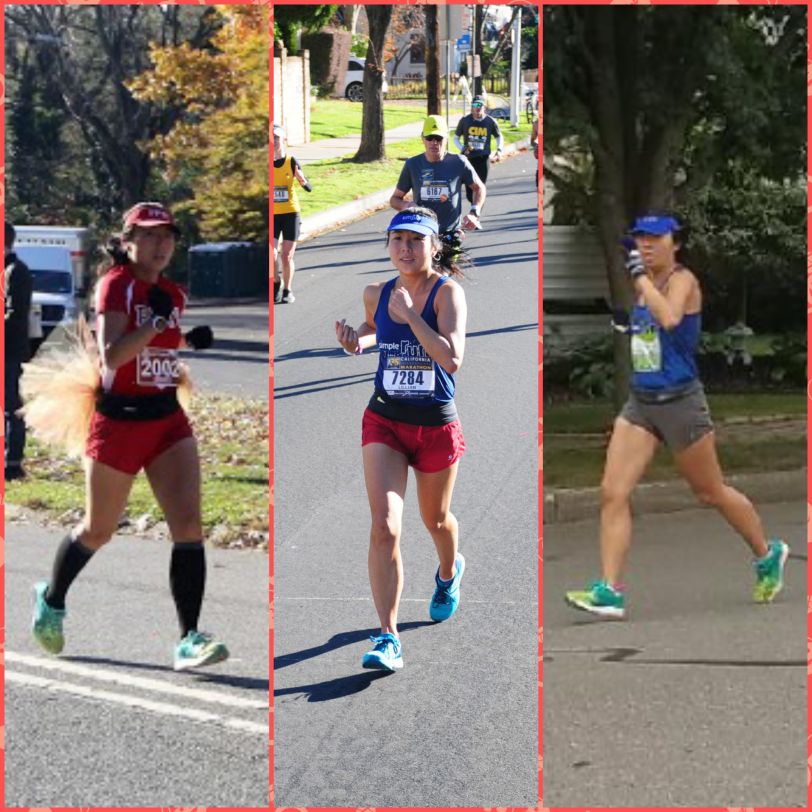 Look at my feet and the ground. Do you see any air space? Gliders have less flight time than gazelles, but I take this to an extreme. I have pretty much NO FLIGHT, meaning I have one foot making contact with the ground AT ALL TIMES. Do you know what this means? I AM RACEWALKING while running. The rule in race walking is that one foot must appear to make contact with the ground at all times. The 5K American Open Road Record for women’s race walking is 21:51, set in 2015 by Maria Michta. This is only 40 seconds faster than my 5k PR. I think I can get this record with some serious training. Do I need to adopt the race walking technique? The only real rule is that one foot has to be on the ground and I naturally do that while running.

What’s your running style? Are you a gazelle or a glider like me?

22 thoughts on “Gazelle vs Glider Running Style: Or I Run like a Racewalker”