Sightseeing on the Big Island, Hawaii

We’ve been doing some traveling lately. Two weeks ago we flew from New York to LA for Ben’s nephew’s wedding. We took the opportunity to hang out with my parents by staying with them for the weekend. The wedding was lovely and we had a wonderful time, especially me since I got to hear stories of what Ben was like as a child. To make a long story short, he was a more extreme version of himself. LOL.

Then bright and early Monday morning, we flew to the Big Island for a few days of vacation before we spectated Kona Ironman World Championship. Ben’s been working pretty much non-stop since last spring, so this trip came at a good time. We flew first class (!) with lie-flat beds. It was a very comfortable flight. The only sad part was that I didn’t get an ice cream sundae because it was a morning flight. #firstworldproblems 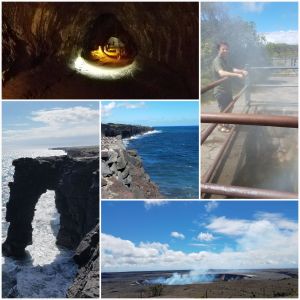 We spent two days in Hilo, the east side of the island. On the first day we went to Hawaii Volcanoes National Park to see volcanoes and their activity. We did the portion of the Crater Rim Drive that was open. Because of volcanic activity and weather, certain areas of the park may be off-limits to tourists, so it’s important to check the park’s website or go to the Visitor’s Center for the latest information. We also did the Chain of Craters Road drive. Both drives are pretty cool because you see lava fields, steam vents, and incredible awesome views. We leisurely did both drives and made several stops, including to see Thurston Lava Tube on Crater Rim Drive. The lava tube was literally and figuratively cool. Ben loved hiking through it. We spent about four hours doing the drive on Crater Rim and Chain of Craters. 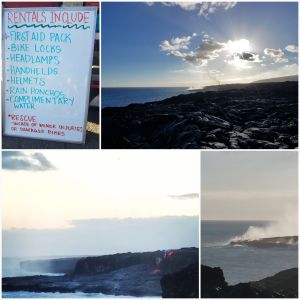 Afterward we drove to Kalapana to get a better look at lava. We were told that this area of the park is only open after 3 pm, but in reality, that information is not really true. First of all, there’s no one to stop you from going into that area of the park. And second, you can hike into that area from the parking lot at the end of Crater Rim Drive, which definitely is open before 3 pm. So I don’t know why the park says that area is closed before 3. Silly rule.

At Kalapana you have a choice of either hiking/walking 4 miles to the lava flow viewing area or renting bikes. While normally an 8-mile round trip hike is what I consider to be a doable short hike, when it’s hot and humid with NO SHADE, it’s unbearably long. I immediately voted for biking. Biking to and from the lava field would take about an hour total compared to the walking/hiking, which would take about 3-4 hours.

There are several bike rental companies setting up shop at the Kalapana parking lot. While their websites encourage you and make you think you need a reservation, in reality, you don’t. We went with Kalapana Cultural Tours because they had the cheapest rental. Weirdly, on their website, they advertise the cheapest rental for $20, but in person, you can get a rental for half that. So DO NOT MAKE RESERVATIONS. For $10 we got a bike, helmet, lights, bike lock, emergency kit, cold water, and “rescue” if we needed it. You can keep the bike as long as you want as long as you return it before 9:30 pm. The bike is a cheap Walmart bike, but you don’t need anything fancy. It’s not worth paying extra for a better bike.

The road to the lava field is packed gravel, which was easy enough to bike on, even for me, a completely unskilled cyclist. The road to the lava field is slightly downhill, which made the return back more difficult, but I managed everything without needing to get off and walking the bike up. Ben said that I looked adorably hysterical as I frantically pedaled uphill. My only point is that if I could do it, then you can too because I’m not a cyclist by any stretch of the imagination.

The lava flow from the viewing site is still miles away, so you don’t get up close and personal. If you want a closer view of the lava, you either need to do a boat tour (subject to weather) or hire a guide to take you close to the lava. Ben and I arrived at the viewing spot in the late afternoon (around 5?). We saw the steam rising up from where the lava poured into the ocean and more steam from steam vents farther up on the incline of the volcano. To be honest, it wasn’t all that interesting or impressive in the daytime, but I felt that this was something we had to see. Ben wanted to go on a short hike through the lava fields, so I went with him. He saw some people hiking and wondered if they had a better view. The answer is no. BUT the good thing about that hike was that we killed more time and by the time we got back to the original viewing site, we got a much more impressive view of the lava.

With less light because of the setting sun, we were able to see the glowing red lava peeking through the jet black rocks and lava flowing into the ocean. THAT was amazing! I was so glad that we stayed longer and got to see this because had we not, I would have found the trip anti-climatic. Instead, we got an incredible sight of flowing lava.

We cycled back in the dark, but this wasn’t a problem as the road is pretty flat (with a slight incline), no traffic, and we had lights. It was kinda thrilling riding at night. 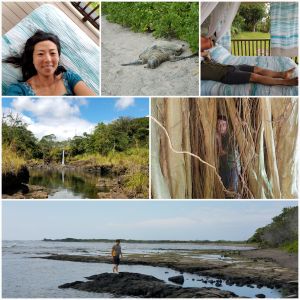 The next day before our drive to Kona, we saw Rainbow Falls and Boiling Pots. Rainbow Falls is a pretty little rainbow that easily accessible. There’s a tiny little parking lot. We were able to park easily when we got there in the morning (around 9?), but it quickly filled thereafter. There are different hiking trails around that area. We went up to go see the banyan grove.

Then we drove to Boiling Pots, which gets its name of the pools of water in the rocks. When the water flow is high, the churning waters as they flow from one pool to the next look like overflowing water from boiling pots. There’s another waterfall called Pe’epe’e Falls. The hiking trail to Pe’epe’e Falls has been closed off because people died from swimming in the lower portions of Boiling Pots. The water flows quite quickly in that area and you could easily get swept away and over a waterfall in the lower pools. We were told that if we wanted to swim, we should stick to the upper pool where the water flow was slower due to the rock formation. Ben and I didn’t want to swim, but I wanted a closer view of the waterfall, so we ignored the no trespassing sign and hiked down to the waterfall. The sight was of the waterfall(s) [there were actually two waterfalls] was lovely. We also took off our shoes to dangle our feet in a “boiling pot” to enjoy the bracing refreshing water on a hot day.

Aside from spectating the World Championships, we didn’t do much while in Kona. Ben begged for a relaxing day (apparently I’m too exciting for him), so we went one day lounging at our AirBnB. We had a super cool house on a flower farm in Kona. Because we were on a mountainside, it was cooler than in downtown Kona. We had an awesome view of the ocean from our lanai, which also had a BED. I didn’t need much convincing to spend my morning and afternoon on the bed looking out to the ocean. I read, snacked on potato chips, and drank red wine.

We went down the street to go visit a coffee farm, UCC Hawaii. There was no way we could NOT visit a coffee farm because the Big Island is famous for Kona coffee. We took their free 10-min Estate tour where we got to see the coffee trees/bushes up close and the guide explained the coffee growing and roasting process. We got to sample two different types of coffee and then we ordered a coffee float, which was absolutely delicious on a hot afternoon.

I really wanted to see honus, green sea turtles, so one afternoon I made Ben go with me to Aiopio Fish Trap, a beach that’s known for having plenty of turtles lying around. Native Hawaiians used to go fishing in this area by building enclosures where during high tide, fish could easily swim in, but be trapped at low tide. We saw a lot of green sea turtles here, both lying on the beach, the rocks, and swimming in the ocean. We even got to see a sea snake.

In terms of my overall impression of the Big Island, it’s the least Hawaii-y of all the islands that we’ve been to (Oahu, Maui, Kauai, and now Big Island). By that, I mean, as the youngest island, it’s the least lush. There are rainforests and lush parts on the Big Island, but they aren’t everywhere as we found in the other islands. It’s very warm and humid and we were there in October. I hate to think how hot it is in the summer. The other interesting part was that prices were similar to what we would find on the mainland. On the other islands, there’s a bit of a markup on prices (especially in Kauai), which we expected because you need to pay for the additional shipping costs of goods. However, we didn’t see any substantial increase in costs on the island of Hawaii. Even the cost of gas was similar to what we had seen in California. Although we did enjoy ourselves, Ben and I agreed that the Big Island was our least favorite among the different Hawaii islands that we had been to.

6 thoughts on “Sightseeing on the Big Island, Hawaii”