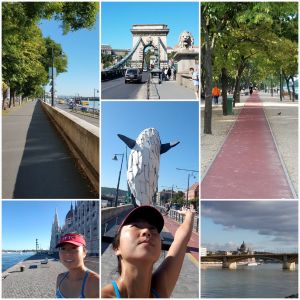 I had three separate opportunities to run in Budapest. Budapest (if you didn’t already know this) is the result of the merging of two separate cities, Buda and Pest, in 1873. Because of their origins as two separate cities divided by the Danube River, they have distinct differences, usually characterized as the peaceful quiet Buda and the lively artistic Pest. I’ll write more about my experiences of Buda and Pest in another post about the non-running things that I did there.

Along the Danube (Pest side)

Of course, if you’re in Budapest, you want to run along the Danube. As I said before, Pest is the livelier side and usually where most people stay when visiting Budapest. I don’t particularly recommend running along the Danube on the Pest side. Unless you run early in the morning, it’s as crowded as the Brooklyn Bridge (also outside of early morning) because of the attractions and the docks for boat tours on the Pest side. The number of people dodging I did made the run less fun. In addition, at least for the section I ran, the pedestrian path along the Danube was mostly paved with stones. They were flat stones, so it was easier than cobblestones, but pounding your feet and legs take on the stones is hard. I didn’t find it pleasant to run this section.

Along the Danube (Buda side)

Okay, so if you want to run by the Danube, *this* is the side you go to. On the Buda side, there’s a nice uncrowded asphalt pedestrian/bike path right along the river and all its views. The path stretches for 5.2 miles from Arpad Bridge and Rakoczi Bridge(north and south end of Buda, respectively). At the south end, there’s a small park and you can run to the end of the promontory to make it 6 miles. I far preferred running on the Buda side. The difference was like night and day. I’m glad that I discovered it because otherwise, I would have said to skip running along the Danube.

In my honest opinion, if you can only run once in Budapest, you should run on Margaret Island, a small island in the middle of the Danube. There’s a path made specifically for runners that goes around the island. How do I know it’s specifically for runners? Because the path is made from solid polyurethane, the same stuff that outdoor track is made of. So you get about 3.2 miles of lovely soft material to run on while shaded by trees and looking at the lovely views of Buda and Pest over the Danube River. This running route has it ALL. There are even restrooms (bring coins) and water fountains.

I really really really loved running on this island. So much so, that I ran here twice, which included my 15-mile long run. Ooof! Okay, running in circles for 15 miles was a little much, but Margaret Island is a wonderful place to run.

8 thoughts on “Running in Budapest”