My Running Tour of London 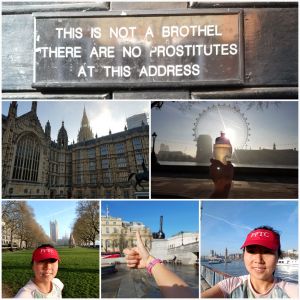 I’m doing some desperate catch-up blogging. I’m not the best about timely blogging when it comes to long trips. For example, I never finished blogging about Machu Picchu (it was awesome, you should go) and our trip in Kenya and Tanzania. I do want to have a record of our wonderful adventures, so I’m working on it (albeit slowly) when I feel like writing, but don’t have anything current to write about.

I was in London (for 20 hours) last April as a stopover from Madrid to NYC (Casablanca to Madrid to London to New York). Ben had offered to help me find a more direct flight home, but I had promised my friends to go to London in 2017 to see them, so the stopover was perfect. Ben found me a lovely hotel in Westminister for a reasonable price. I flew into Heathrow that afternoon, took the Tube to the closest stop to the hotel, had a long confusing walk to the hotel (took almost an hour, later when I figured my way around, the walk literally 10 minutes) thanks to the meandering non-grid streets of London (the guy who helped me was super kind, he left his friends at a bar without letting them know, and carried the heavy rug I bought in Morocco halfway to the hotel), take a quick shower, and rush out to have dinner with friends from grad school who now live in London. Dinner was wonderful, both in terms of company and food. We got caught up in each other’s lives and our mutual friends’. Although Facebook does a lot to help us keep in routine casual contact with each other, there’s really nothing like the long drawn out conversations, lingering over coffee the way we used to do back in grad school. It’s strange to think that we’ve been friends for almost two decades now. I remember when they were my newest group of friends.

Because my flight wasn’t til the mid-afternoon, I had all morning to relax and enjoy as I would like. I’ve been to London several times, so I’ve already seen most of the usual tourist attractions. Instead, I decided to enjoy London through a long leisurely run.

From my hotel, I ran toward the Thames River, where I got to see Westminister Abbey, Big Ben, and the Palace of Westminister. Then I ran along the Thames on the northern bank where I saw the London Eye, the giant Ferris wheel, on the other side and toward the Millennium Bridge, a cool steel suspension pedestrian bridge. At opposite ends of the bridge, I saw St. Paul’s Cathedral, Globe Theater, and the Tate Modern. Then I ran back toward Westminister Bridge along the southern bank of the Thames. Running along the Thames is very popular because you can see so many of London’s sights. It’s also popular with locals who run-mute (run to commute).

I crossed back on Westminister Bridge and started plotting my route toward Sebastian Horsely’s sign, “This is not a brothel. There are no prostitutes at this address,” at 7 Meard St. in Soho. Horsely, an artist and a dandy, was quite the character. Much like New York’s SoHo, London’s Soho has cleaned up, lost its edgy bohemian artistic vibe, and it’s now another expensive chi-chi gentrified neighborhood.

Then I ran to Hyde Park, a beautiful large urban park whose hard-packed trails were an absolute delight to run on! I far preferred to run in Hyde Park than along the Thames. I found running along the Thames to be too crowded for my tastes. I constantly had to watch out for people and couldn’t simply relax and run. At Hyde Park, I was pretty much alone on the trails. It was far more relaxing to run there.

Finally from the park, I ran back to my hotel, which made the route just over 10 miles. It was the perfect run for an easy sightseeing trip. After showering and packing my belonging, I had a lovely lunch at a nearby restaurant for a very reasonable price. I have  to say I’m blown away by the difference of the London when I first visited when I was 18 years old, over two decades ago! Far more many choices now. Back then, the only things I could find to eat were British pub fare and Indian food.

Flying back home was interesting. I went to Gatwick Airport a little early, which ended up being a good thing because my flight on British Airways was severely delayed because of a mechanical problem. BA got a new plane for us, but it was much smaller than the original plane and they needed several volunteers to go on other flights. I quickly volunteered because they were playing us around $320 American dollars plus cab fare to Heathrow because that’s where all those flights were. I was more than happy to be paid over $300 to go on a flight that I knew I was taking off in the evening than to wait around Gatwick all afternoon, not knowing when it would take off. In the end, I found out that I arrived at JFK an hour later than the flight that I would have been on had I not volunteered. This was the most amount of money that I’ve ever been paid to be voluntarily bumped off a flight.

I had a great trip abroad, but I was really happy to be home. Bandit was ecstatic to see me again because she had no idea what happened to me and thought I had disappeared forever. Ben was happy to no longer be single.

No more trips abroad . . . until August.

5 thoughts on “My Running Tour of London”