The Midnight Ride of Sybil Ludington 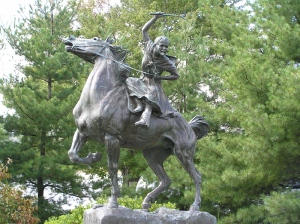 Statue of Sybil Ludington in Carmel, NY Photo from Wikipedia

April 26, 2017 was the 240th anniversary of Sybil Ludington’s midnight ride in 1777 to warn the militia of the approaching British army. She was 16 years old and covered about 40 miles with her horse, Star. Unlike Revere, William Dawes, and Samuel Prescott, who also rode in the dark of the night, Sybil Ludington did NOT get captured by the British troops, plus she covered twice the distance that Revere did.

On April 26, 1777 at around 9 pm, Sybil Ludington started her long ride to warn the surrounding towns that the British were planning to attach Danbury, CT. It took her several hours to ride 40 miles; she wasn’t done until about 6 o’clock in the morning. Thanks to Ludington’s effort, several hundred militiamen gathered at her father’s, Colonel Henry Ludington, home to defend against the British. Though they were not successful in saving Danbury, they were able to force the British troops to retreat in the Battle of Ridgefield.

In 1935 the state of New York erected markers along Ludington’s route in Dutchess and Putnam counties to commemorate her midnight ride. In 1975, the US Postal Services honored her with a stamp.

If you wonder why you haven’t heard of Sybil Ludington until now, well, her historic ride is not without some controversies. As much as I really want to believe that Sybil Ludington heroically rode to help shape the outcome of the American Revolutionary War (and eventually our country), there is scant evidence for her ride. It may be nothing more than an apocryphal tale told by her descendants. Regardless of its veracity, I love this story.

Every year in late April (this year, it’s tomorrow on the 29th), Carmel hold a 50K ultra to celebrate Sybil Ludington’s feat, Sybil Ludington 50K.  The course roughly follows Ludington’s midnight ride. If you’re not up for the full distance (like Paul Revere), you can do a relay.

6 thoughts on “The Midnight Ride of Sybil Ludington”