Nailed it! Pacing the 3-Hr Group for Lake George Half Marathon 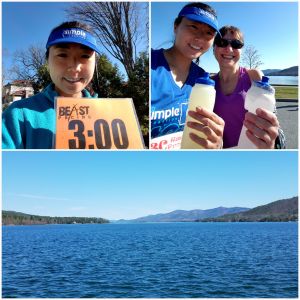 Name of the race: Lake George Half Marathon

The last time I paced it was over a year ago at the now defunct Bucks County Half Marathon. I was leading the 2:30 “group” (There was no one with me at the end) and missed by 24 seconds. I would have felt terrible if anyone had been with me, but no one was, and I learned a lot about pacing from that race. I was eager for redemption, so when Vanessa of Beast Pacing offered me the 3-hr pacing slot for Lake George Half, I took it.

Lake George is in the Adirondacks region of New York state. I’d never been to this area and now that I’ve gone, I’m rather sorry I didn’t go sooner. Lake George is BEAUTIFUL! Such a gorgeous lake! I expect us to make a trip up there this summer.

I drove to Albany on Saturday to go to the Science March in the afternoon. It was about three hours of speeches and rallying and a half hour of marching. SUNY Albany did a really cool thing where they set up several booths from the different STEM disciplines to do demonstrations for children (and adults). Scientists, in particular professors in the ivory tower, aren’t known for getting involved in politics (obviously there are exceptions), but the current administration galvanized us to get involved. I’m a strong believer that makes democracy work is getting knowledgeable people engaged so in this regard, I see this as a positive. I just think it’s sad that, as a sign put it so elegantly, “I can’t believe I’m marching for facts.”

Then I went to Jake’s apartment to spend the night. Jake is a friend who used to live in Jersey City when we lived there, but he went back up to Albany. He was away at a wedding, so I had his place all to myself. Plus two dogs – his dog, an adorable border collie with hypnotic blue eyes, and a giant Alaskan Malamute that was the size of a bear cub. His mother and sister were taking care of the dogs during the day and they didn’t know that I was going to be at his apartment. I didn’t know they were coming over with the dogs. So I heard someone at the door trying to come in. At first I thought it was a neighbor who mistakenly grabbed the wrong door. Then I realized they were trying to come in. We awkwardly met in the entrance area. I have to say they were completely unfazed in finding a stranger in Jake’s apartment. Anyway, we sorted everything out and I was now dogsitting, which was fine because I love dogs.

Sunday morning I took the dogs out before heading out to Lake George. The dogs were going to be alone for a few more hours until the mom came to pick them up for the day.

The weather could not have been better. It was a slightly chilly 41 degrees at the start, but no wind, and it was bright and sunny. I knew once I started running, I would be fine. I met up with the other pacers and we chatted about the various races that we’ve done. We wondered about the course because it was difficult to get information about elevation profile. We were simply told it was hilly. Because I was pacing a group that was so much slower than what I could run easily, I wasn’t worried because I knew I had to do walking breaks. I figured I would adjust the walking breaks as needed.

I started at the very back, in fact, I was the last to cross the line. Very quickly I lost everyone. I tried to see if I could run a 13:40 pace. The answer is no. Even my slowest shuffle is more than a full minute faster than that. Because I had no one with me and no one within my sights, I took the opportunity to experiment with various ratios of running and walking. This meant that for the first half of the race, I was going much too fast for a 3-hr group. If I had people with me, I would have stuck closer to the 13:40 pace, but since there was no one, I trudged along.

I saw the first runner heading back to the finish line when I was about three miles in. I cheered for him and waited for the other runners to go by. At first I got a little depressed because I just got started and already the first set of runners were going to be done and I knew I was in for a long haul, but I forgot all this as I cheered for the runners. Lake George Half had a small field, so I had time to think of different things to cheer as people passed me.

My friend Judy of So Very Slightly Mad was running the race and she came in with another runner in 3rd and 4th place when I saw them. So I yelled, “One of you is going to get 3rd place overall for women and the other is getting an age group award!” Those words were apparently all she needed to kick it into another gear and smoke the runner she was with and the one ahead of her to come in 2nd place. I was thrilled for Judy when she told me over Strava.

As I cheered for runners and thought of funny things to say to bring a smile to their face, I got into a zen-like state. Despite this being the longest I’ve ever spent out on a course for a half marathon, time passed really quickly. I got absorbed into the goal of doing my job well. It didn’t matter if I didn’t have anyone with me, I was there to pace 3:00 half and I was going to do it well. Since I was running so slowly, I never entered a pained or labored state that I normally get into when I run. Who knew running didn’t have to be painful! I stopped at the water stations. I chatted with the volunteers. I took my time at the port-o-potty. I ambled. I really just enjoyed myself and the beautiful day that it was.

When I got to the turn around point, I was about 4 minutes too fast, so I started taking longer walking breaks to burn through the excess time. Around Mile 8 I noticed two girls ahead of me walking. I didn’t want to catch up to them. I didn’t want to pass them. I really wanted to be the last person to finish the race. Because I was ahead of schedule, I burned through more of the excess time to give them as much time as possible before I passed them. Eventually I did catch up to them after the Mile 10 mark.

Being a pacer is interesting work. It’s a bit like being a bartender in that you need to be an armchair psychologist. What do they want? What do they want you to say to them to make them feel better? I asked if they were all right and if they needed a gel. They gave me brief answers that they were fine and continued to talk to each other. From their behavior, I got the feeling that I wasn’t welcomed company, which I totally understood. Sometimes, actually always, when I’m having a bad race, I’m in a deep dark bad place and the last thing I want is a cheerful person telling me that everything is all right. When I’m there, I just want to be left alone stewing in my own misery.

If they indicated that they welcomed any distraction, I would have chatted and stayed with them as long as I could to help drag them to the finish line, but I got their message and kept on with my pacing schedule. Every once in a while I looked back to see where they were. At one point, they started running again and almost caught up to me. I encouraged them, but I lost them again when we got to an incline. I shouted that there was just about a mile and a half left. From that point, I had to leave them so I could stay on target.

Before the race, Vanessa sent us detailed instructions on what to do for our pacing. If the course was long or short, we had to adjust as much as possible so that we arrive at the finish line anywhere from one minute before the target time til the target time, ideally 30 seconds before the target time. The course was running short by .1, so I stopped running the tangents, started running the long way, and taking longer walking breaks in order to eat up more time. My biggest worry was that the mile markers would suddenly correct itself at the last minute, so then I would be left with an additional .1 mile and not enough time, so I banked an additional minute just in case. I figured if the course kept on being short, I would slow down even further for the last bit before the finish line, but if the course distance corrected itself, then I would have enough time to make it. The course continued to be short, so I ambled up the last incline to the finish line. I yelled, “Nailed it!” as I did a short sprint to the finish line.

It was nice to see that most of the other pacers stuck around to wait for me. Then we waited for the other two girls to finish. They came in about two minutes after me and we gave them a huge cheer. They persevered.

The race director told me I won a raffle and that bananas were my prize, and gave me a tumbler as well in appreciation for taking on the job of being the very last pacer.

Before the race started, I thought I wouldn’t enjoy pacing as much as I did. I had a TERRIFIC time and in all honesty, this is one of the proudest things that I’ve done in my running “career.” It meant a lot to me to do this job well. It didn’t matter that I didn’t have any runners with me. I had a job to do. While I was out there, I was mindful of the fact that I could pick up runners late in the race.

I found pacing to be a rewarding experience and look forward to doing it again.

27 thoughts on “Nailed it! Pacing the 3-Hr Group for Lake George Half Marathon”