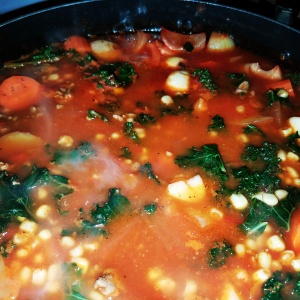 Today was a pretty cold and snowy day, so a hot bowl of soup seemed like a good idea. I came up with this recipe based on other hamburger soup recipes and what we had available at home. I ate two bowlfuls and Ben had three for dinner, so I think this soup was a hit!

Everything under ingredients is what I used. Variations are additions or substitutions that I think would work nicely in this soup. The measurements for the spices are approximations. I don’t actually know how much I put in. I roughly chop vegetables because 1) my cooking style is on the rustic side and 2) I lied about having a rustic cooking style, it’s really because I’m too lazy to do proper dicing. Having bigger, rougher chops is easier and I can dump things in and forget about it.