This past week Ben and I went on week-long trip to Colorado & Florida. I’ve been to Colorado, but Ben’s never been and he has been hankering to see what it’s like (especially Boulder) so a while now. As for Florida, the running joke in our house is that Florida is Mecca for Jews and he needs to go on his yearly pilgrimage. We found some to squeeze between our other responsibilities and off, we went!

We arrived late Wed night, just in time to order some Thai for delivery and crash into our airport hotel. Thursday, we got a rental car and drove to Denver. We checked out the Denver Botanic Gardens, which was very nice. A sculpture exhibit was going on as well, so it was a lovely morning of art and blooms. We also highly recommend getting a lemonade at the restaurant by the water lily pond. A large housemade lemonade (comes in different flavors, we got strawberry) was $4 and you can get as many refills as you want. Very delicious and refreshing on a warm summer day. Then we went downtown to the Denver Mall, which isn’t a mall at all, but a car-free pedestrian zone with shops, restaurants, and bars. We walked all the way down the mall to the South Platte River Trail, which is a nice little biking/walking trail right next to the river. I found a fun statue of a pair of angel wings, so I made Ben take several photos of me and the wings. 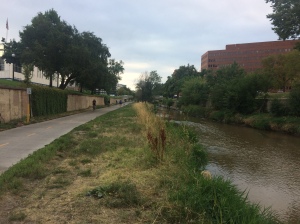 The next morning we headed out to the Cherry Creek Trail to do a four-mile tempo. RLRF said to do 4 miles at 7:50 pace. Being at altitude, I knew I wasn’t going to hit it, but I was hoping to do something close, like 8:00-8:10. HAHAHA! Although I was fine walking around (Ben noticed the scarcer supply of oxygen while walking), I immediately starting gasping for air like a fish out of water when I started running. I was nowhere close. I ran based on effort and completed it at 8:49 pace. A minute a mile slower, but it was definitely tempo by effort. I was satisfied with what I did. Being that I had just arrived, my body hadn’t adjusted and running on effort is all I could ask my body to do.

Between South Platte River Trail and Cherry Creek Trail, there are almost 70 miles for bikers, walkers, runners, and roller bladers. It’s an extensive system. There are so many bikers and runners. Congestion isn’t a problem, but you do need to be mindful of other people. I just think it’s super cool that there’s so much trail right in the city. The photo I took above doesn’t accurately capture the trail. It’s nicer than it looks in the photo.

We showered and then drove to Boulder where we were staying for the rest of the CO trip. We we hung out in downtown Boulder, which Ben just loved, and then had dinner with an old friend from college at Under the Sun. It was great seeing him again; we hadn’t seen each other in several years and I finally got to meet his wife and son. We got caught up on each other’s lives. I know people like to poo-poo on Facebook, but honestly FB is really the best for passively keeping in touch with several people.

By the way, the food and drinks at Under the Sun (and the sister restaurants) are amazing. Definitely go if you’re ever in Boulder. Ben, especially, loves their Happy Hour deals ($3.50 for a pint of beer and $5 cocktails!).

Saturday, I ran a half marathon (a race report will be coming). It was tough, but fun. In the afternoon we drove out to the reservoir to do a short hike and enjoy the view of the mountains. There was a trail that we wanted to do, but we kept on missing it, so we ended up hiking another trail instead. It was all good because we clamored up some red rocks and were rewarded with a gorgeous view of downtown Boulder. Coincidentally I found out that my very good friend from grad school was also visiting Boulder with her family, so we went over to her parents’ place to see her and her family. She’s also training for a marathon, so we bored her daughters with details about our marathon training.

Sunday morning we did a short little hike/run in a different part of Boulder. After getting hot and sticky, we cooled off by going TUBING! One of the coolest things to do in Boulder is to rent a tube (or buy one if you live in the area) and go tubing in Boulder Creek. The water was on the low side, so only the creek in Eben G. Fine Park is tubable. We rented a double tube from Whitewater Tubing for $20. It was amazingly fun. There were little rapids that made things exciting and dumped you into a pool where you slowed down and floated until you hit the next set of little rapids. We started at one of the park and tubed down to the other end, where we hauled ourselves out and walked back up to the start. We only flipped over once and my shoulder/back got rammed into some rocks and a tree root only once as well. Other than those incidences, we successfully tubed without anything happening. The water was really cold after a while, so I was fine with going down four times. Ben did it once more without me.

Early Monday, we flew to Fort Lauderdale, where we simply relaxed. We did a couple of short easy runs, had several long walks on the beach, swam in the ocean, and ate good food. Despite it being warmer and more humid, I definitely noticed that it was easier to run in Fort Lauderdale compared to Boulder. I wasn’t in Boulder long enough to have any long term benefits of altitude running, but running at sea level was easier immediately following being at altitude. It makes me wish that I could spend a week or two while I’m tapering in the mountains before I do Steamtown.

Have you ever gone tubing? Or do altitude training?