Some months ago Ben received an invitation from Microsoft Challenge to be one of their sponsored athletes for the executive race-within-a-race. We’re not sure how Ben was selected, but we were both honored and delighted that he was invited. As a part of the Microsoft Challenge, Ben received a complimentary race entry and two nights stay at the J.W. Marriott Essex House. There were other perks, such as valet parking, a welcome dinner, breakfast, early bike check-in, shuttle service from bike transition, shuttle service to the start line the morning of the race, and post-race VIP tent. Truly five star service!

Aside from having an incredible stay-cation in Manhattan, I was thrilled that we were staying at the Marriott Essex House because I was signed up to do the NYRR Long Run in Central Park Saturday morning. The hotel was across the street from Central Park. Our room was quite large for a Manhattan hotel room. Normally I would have needed to wake up at dark o’clock so I could drive to the Upper East Side. Instead I had a relatively leisurely morning. I woke up, dressed, and then slowly ran up to the start.

Our Manhattan weekend went off with a great start. Friday afternoon we arrived at the hotel and relaxed for a few hours before dinner. A great welcome bag filled with snacks, gels, samples, and a couple of bottles of water, greeted us.

The welcome dinner was at Sant Andrea Cafe that was down the street from the hotel. Before dinner, we mingled with Microsoft Challenge Event Team led by Ted Kennedy, the Race Weekend Concierge, and other Microsoft Challenge athletes. All athletes received a Microsoft Band that tracks heart rate, exercise, sleep quality, and calorie burn at dinner. A cool new toy for us! We both really enjoyed meeting the other athletes; everyone was fun to talk to. A wonderful coincidence was that one of the athletes was someone Ben already knew. They both went to the same MBA program and then later worked together at a bank. I love meeting people who knew Ben from before he met me. I love hearing stories about, but basically what I’ve learned from hearing all these stories is that Ben has not changed. He’s the same person back then as he is now.

After dinner, Rebeccah Wassner (three time winner of the NYC Tri) and Simon Lessing (four time World Triathlon Champion) gave brief talks about competing. If you haven’t heard of the Wassner twins before, you should visit the site and read their story. I was excited to hear from Bec Wassner because I knew about her story and how much she and her twin, Laurel, work to raise money to fight  cancer.

Saturday, I did my long run of 16 miles on a very hot morning while Ben went to breakfast to hear about cloud computing from Alysa Taylor. As a part of Microsoft Challenge, the pre-race debriefing was also brought to the athletes. In addition to everything else, the athletes also received the official Microsoft Challenge tri outfit and a great travel duffle bag. Basically every time Ben turned around, there was a cornucopia of gifts waiting for him. Meanwhile I was sweating and dying in the heat. I very much earned my lunch at Nougatine at Jean-Georges. After lunch, Ben took his bike and belongings to transition to set up for the next day.

Sunday morning, the alarm went off at 4:30 am for Ben. Our dog, Bandit, and I sleepily watched him get ready. Then he left to go to the start line with the other athletes in a shuttle where they were fed a light breakfast of bagels, fruit, and yogurt. Bandit and I fell back asleep. Eventually we got up and slowly walked over to the VIP tent in the finishers area. It was early and aside from the staff, there weren’t many people, but I met Grant Barus, who warmly greeted me and invited me to help myself to breakfast. A huge spread of pastries, cheese, crackers, quiche, pigs-in-a-blanket, and fruit was laid out. We had time until Ben would be coming in across the finish line, so Bandit and I tucked into our breakfast.

After eating we walked over near the finish line to see if we could spot Ben. Unfortunately we missed him and instead met up with him at the VIP tent. We ate more food (sandwiches, wraps, and cookies were brought out) and hung out with the other Microsoft Challenge finishers.

Ben had an exceptional experience at the NYC Triathlon. Although he’s done this tri several times before, this was the first time that he got to start in the Yellow Wave. As a man in his 30s, his wave is one of the last waves; by the time he starts, the winners of the tri have long finished. As a Microsoft Challenge participant, he started right after the pros and the amateur elites.

The swim went well because as always there’s a current going downstream. Ben loved the bike portion because for once he experienced no congestion. In prior years, Ben had to navigate around several cyclists, slower more inexperienced ones who worried Ben with their wild swerving and the faster cyclists who whizzed by. This time Ben saw nothing but open space in front of him. Because of the heat advisory, the run had been shortened to an 8K for the non-pros (the pros still ran a 10K). 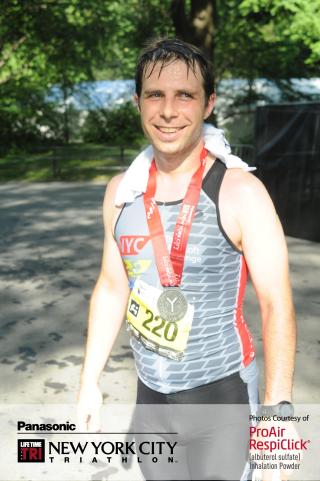