Marathon training starts two days after I return from this trip. Since I’m still in the base training phrase and on this trip my schedule is dictated by the demands of my parents’ and aunt’s desires, I figured whatever I managed to run during these two weeks would be fine. For the past few months, I’ve been averaging about 20 miles per week. After several weeks of 20, 21, 22-mile weeks (yeah, I know it’s not much compared to most runners, but for me, this is a TON), my legs were really beat. Even with taking an extra rest day, my legs felt heavy. I decided to use the first week of the trip as a cut-back week to give my legs a break (despite all the walking I did every day). This did the trick because by the end of the week, my legs felt “snappy.” 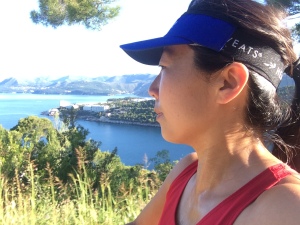 Running in Dubrovnik is not as easy as running in Ljubljana. It’s very hilly (the entire city is built on a side of a mountain) and I couldn’t find any long stretches of road or path that was exclusive to non-motorized means of travel. Still I did ran on two different mornings. Two mornings ago, I ran to Park sum Verliika i Mala Petka, a park that was west of where I was staying. I found a few runners there. While the sea views from the top of the hills were wonderful, the running was a tough on me. Like the rest of Dubrovnik, it’s hilly. A portion of the park pathway was a lovely packed sandy path that was a delight to run. Then it rapidly got difficult. The path was a technical trail with lots of large loose stones that made it difficult to run, particularly if you’re prone to being clumsy like me. I gingerly picked my way through and much to my amazement survived the run without a single fall. None of the paths in the park were long and it would be difficult to do long runs in this park because of it (not to mention the stony trails).

The second run I took off north of the park. I carefully searched on Google maps to see if there was an alternative. I found a gray route hugging the coast line that looked promising. Much of the time these gray lines are trails or pedestrian paths. My search was rewarded with the Setnica Walking Trail, a .6-mile trail along the Adriatic Sea. When it comes to running, I love running over footbridges and running next to water. It was breathtaking seeing the dramatic Dalmatian coastline. On this trail, I found a couple of runners and some walkers. At the end of the path, there’s a bar inside a cave, but I didn’t make to it the end because it was blocked by some construction being done.

My view while running on Setnica Walking Trail

The Setnica Walking Trail has majestic sweeping views of rugged rocks and an endless horizon of the sea and I definitely recommend that everyone runs or walks this trail while in Dubrovnik. It’s just a pity that it’s so short, not even a mile long one way.

My runs in Dubrovnik were on the shorter side (5-mile run and 4-mile run). Because I dislike running on the streets (sidewalks are non-existent half the time in Dubrovnik), I try to find more secluded places to run. I was glad that I didn’t try to start marathon training early because I don’t think I could have completed a long run in Dubrovnik. But for short jaunts, these two places were fine.

6 thoughts on “Running in Dubrovnik”