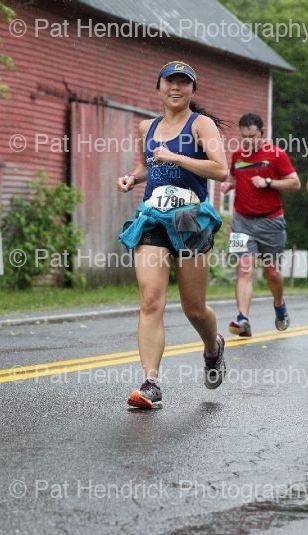 Name of the race: Covered Bridges Half Marathon

The rain came in time for the start. Luckily for us, there were some tents and other overhead protection. Many of the runners, including us, chose to stay underneath the shelter as long as possible. Ben and I loathed being out in the rain so much that we stood under the pacer tent (the pacers had long left) that was next to the start line. When the race began, we slipped out and joined the appropriate group as they crossed the started line.

Although there were under 2000 runners, the first couple of miles are quite congested on the quiet country road. I enthusiastically started with the 1:50 pace group, but realized soon that it was a bit too much for me, so I quietly slipped back and let them run off without me. I decided that I would try to run around 8:30’ish pace. Ben and I accidentally did a course preview by car the day before when we made a wrong turn somewhere and ended up on the course. This turned out to be a good thing because it prepared us for The Hill at Mile 8.

But before that hill, I was running and trying to stick to 8:30’ish pace somewhat unsuccessfully. The night before, we went to the pre-race pasta dinner, which was only okay (you can skip it), and I overhead a conversation at another table full of Vermonters. They waxed on and on about how gorgeous the course was (it is) and that it was a PR course with its net decline. A guy threw in the aside, “Yeah, there’s a hill at Mile 8, but other than that, it’s a flat course.”

Yes, technically it is a net decline, but it’s full of rolling hills, and not necessarily small ones. It is what I could call “Vermont flat.” Meaning only people who usually do races with major elevation change would even think about calling this flat.

The course is beautiful. Much of it hugs a river, so we ran for miles with a river on one side and a verdant forest on the other. It was a pity that it rained, but I really would have enjoyed this course even more with nicer weather.

Ben decided to join me after Mile 4 when we ran through the covered bridge. He wasn’t feeling it and thought it would be more fun to run with me. Approaching Mile 8, we knew what was headed for us because of the course preview that we did. Mentally  the preview helped because the hill was quite steep. Many runners stopped running and walked up the hill. I knew that the hill was steep but short and there would be a long gentle decline afterward. This gave me the mental fortitude to keep marching along at a good clip.

The crowd support was good for a rural race. There were several bands set up along the route to play music. There were pockets of people cheering. At around Mile 11, there was one very enthusiastic lady cheering on top of her lungs. She was WONDERFUL! I’m sure she was hoarse the next day.

All throughout the race it rain. It was the heaviest during the first half, but it was lighter afterward. I was having a better day than the last time it rained on me for a race.

Right before the finish line, I reached out to grab Ben’s hand so we would cross the finish line holding hands together in the air. Another half marathon done! This was my third in four weeks. Whew!

There was a huge spread of food, including ice cream and beer for runners. On a warm day, I would loved the ice cream (good quality stuff), but on a cooler wet rainy day, ice cream wasn’t what I was looking for. Don’t worry, I still ate it. We got our food and beers and sat for a few minutes to rest and recover before we marched the longest half mile ever back to the the runners parking lot.

Having done this race, I can see why Covered Bridges has made several lists on bucket list races. It’s a beautiful course, despite only having two covered bridges. The fact that it’s difficult to get into may also add to its allure. This year it sold out in 8 minutes. I had the date when registration opened marked on my calendar. I deliberately stayed at work late until 7 pm to make sure that I could register in time. I love smaller local races and Covered Bridges is definitely a small community affair that locals are seriously proud of. The race organizers seriously care about runners and ask us for feedback so they can improve the race for the future. I also appreciated the lack of an expo. I think Ben’s attitude about expos rubbed off on me because 99% of the time, I can totally do without them. We picked up our bibs the morning of the race. The race director sent out an email reassuring us that they’ve got a system and all runners would get bibs in under 2 minutes. In reality, it was far less than two minutes. I walked up and got my bib with a snap of the fingers. We got our shirts at the finish line with our medals. We loved this and found this to be so much more humane. I hate being forced to go to expos because they don’t do proxy pick ups or charge a lot for race day pick ups and being forced to go all over the expo because I have to pick up different things at different locations.

I’m glad that I did this race, but I don’t think I’ll be back. Not because this was a bad race, it wasn’t. It was a  lovely race. But Vermont is a long drive from New York and the there aren’t enough covered bridges in the race for me. So between Swanzey and Covered Bridges, I pick Swanzey as being a better covered bridges half.

Another thing I’d like to mention is that if you’re in the Woodstock/Royalton area, you should eat at Worthy Burger. They make a delicious juicy burger (and give you a huge serving of fries for $3.50 – this is the small), but what makes this place outstanding is the great outdoor patio that’s dog-friendly! We came here for dinner, realized it was dog friendly, so we rushed back home to get Bandit. They have water bowls for dogs and the staff was really sweet to our pup.

One more thing, Vermonters are sweet and friendly people. I’ve lived in New York too long because I now think smiling and being friendly are strange (Ben argues that New Yorkers aren’t unfriendly – true- but we don’t smile and we aren’t happy). Everyone we met was terribly nice and polite. It’s definitely a different pace of life in Vermont.