Name of the race: Rutgers Unite Half Marathon 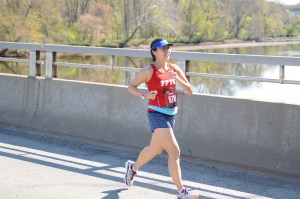 Over the Raritan River

This was a spring race that I was looking forward to doing. I had wanted to do the Rutgers United Half for a while because Ben had heard good things about it. Timewise, we couldn’t work it into our spring race schedule the last couple of years, so I was eager to do it this year. Then much to my excitement, I found that I selected to be one of the race ambassadors. I was happy to support Rutgers Unite Half because CGI Racing operates the Philly Love Run  and I ran that race last year. I knew from past experience with CGI that it would be a well-run tight ship.

I have a number of things that I could have worn, but in the end I decided to wear my PPTC singlet because the school color for Rutgers is red and they asked us to show school pride. While I didn’t go to Rutgers, I did attend a public institution on the West Coast and I have a special fondness for Rutgers because of the 2001 football season (it was the year when Cal won one game and yes, we won against Rutgers. Any Cal fan who survived that horrible season will tell you how grateful we are to Rutgers from sparing us from a winless season.).

I woke up early so I could drive to Rutgers University in New Brunswick. I chose to park near the finish line because after a race, I like being able to just walk to my car. There was plenty of free parking. Although the race info stated that shuttles to the start line ran every 15 minutes, in reality they were far more frequent. Every few minutes a bus rolled up, runners were packed in and the bus took off. Before I knew it, I was at the start line.

If you weren’t able to go to the expo, for $25 you were able to pick up your race bib the day of. I happened to be standing near a young college-age student who was picking up his bib. Unfortunately he only had a $20 bill and the volunteer was strictly enforcing the rules about needing to pay $25. The guy beseechingly peered out to other people begging for money promising to pay back. Luckily for him, I happened to stash some money in my Flipbelt in case I wanted to buy a coffee or something after the race. Without giving much thought, I offered to lend him money. He took my cell number and promised to pay me back. It wasn’t until several minutes later that I realized that I never bothered to get his name or number. I had no way of getting a hold of the guy. “Well,” I thought, “Either I get paid back or I don’t.” When I told Ben this much later, he thought I was entirely too trusting and naive. Maybe, but honestly, I prefer to live in a world where I can trust people to be good.

With that, the announcer requested that all runners get into their corrals. I was hoping to see a 8:30 pacer, but none existed. In addition, much to my dismay, my Forerunner 10 decided that day was a good day to cease working. I pride myself on being able to settle into a good “race pace” by relying on what my body says, so this was an opportunity to see just how true that was.

The horn blared and we were off. My pre-race plan was to run a 8:30 pace for the entire duration (or as long as I could hold it). I settled down to a pace that felt good and waited to the first mile marker to see what I did. When I saw the clock, I discovered that I nailed the pace (8:28). I was thrilled and concentrated on just running at my comfortable HM pace.

After a bit, I discovered the course is not nearly as flat as it is advertised to be. There are not major elevation changes here, but there is enough small undulations that keeping a straight pace wasn’t the easiest thing. I decided to focus more on running by effort. Slowing slightly for the inclines, and using the declines to make up some of the deficit. I focused on keeping my breathing even and not too labored.

The course winds around three of the New Brunswick campuses. I missed not having Ben with me because it’s a great course for seeing other runners. There were several points where I would have had a chance to see Ben because the course winds around itself or does an out-and-back. My favorite part of the course was just before Mile 12 when we crossed the Raritan River. I love running by or over water, plus I knew the finish line wasn’t much farther away. 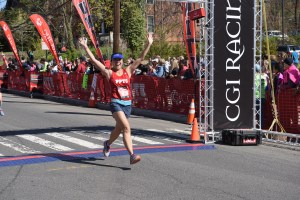 All the way up to Mile 10, I did a great job with keeping around 8:30 pace.  Miles 11, 12, & 13, I lost a bit of focus and slowed down. The last .1 mile of the Rutgers Unite is incredibly fun. It’s straight downhill on College Ave. I crested over the hill and saw the bold finish line banner. Then at that point, I hightailed it right to the finish line careening past a handful of tired runners. As I crossed, I heard the announcer say my name and to tell everyone that I was one of their race ambassadors. I was so pumped to have a solid finish.

I was hoping that at some point along the course that the marching band would be playing (this being a college campus and all), but I didn’t see any. I did see the drum line later on when I walked past the finish line going back to my car.

I got my food and swag and slowly made my way back to the parking lot. There was a cafe along the way that was filled with runners and spectators. I stopped to buy a cup of coffee. While temperature in the 50s is great for running, once I stopped and cooled down, I was chilled. The coffee was perfect to keep me warm enough until I got to my car. I was standing in line, when I received a text.

It was from the guy I lent the money to. He had just finished the race and wanted to know how he could repay me. I gave him my Paypal info. Before I made it home, he repaid me. I love how conscientious he was and how he validated my thoughts about living in a world where I’m able to trust people.

The other pleasant surprise was the fact that race photos were reasonably priced. I was able to purchase two photos for $10 (buy one, get one free). There were some great shots of me and I took advantage of the offer to pick two photos that I liked the best. I wish all race photo companies would have reasonable prices. I’m not going to mention who (but you all know who) but there’s a company that has the most ridiculous prices. I would love to buy a photo or two, but I’m not going to do it for $35 a pop.

On a beautiful spring day, I ran a fun half. As usual, the logistics were well-executed by CGI. I wish this race had more college elements to it (i.e., marching band, cheerleaders, mascot, etc) because it bills itself as being a Rutgers race, but overall I have no complaints.