Swag: Long sleeve tech shirt & 50% tickets to Edaville USA on the day of the race (aka Thomas Land)

I was in Boston last weekend to see my mother and nephew. My mother flew to Boston to babysit her grandson, while my sister and brother-in-law went on a quick vacation. I drove up on a Thursday to spend some quality family time with my mother and growing-too-fast nephew. Since Wineglass most of my runs have been speedwork on a treadmill. I looked for a “longer” race in order to force myself to run longer than a few miles. The race description of the Edaville Rail Run where it promised a fun trail run going past cranberry bogs seemed intriguing so decided to go race this if the weather held up.

It was cloudy and cool on race morning. The winds were strong, but there was no rain, so I decided to go do the race. The race was 45 mins away from my sister’s house, but with the somewhat late start, I still had a leisurely morning. I drank some coffee and ate a slice of the insanely rich and delicious chocolate pound cake that I brought with me from Leli’s Bakery in Astoria, NY. This is my usual pre-race meal – coffee and some sort of easily digestible refined carb, breakfast of champions.

I arrived a half hour before the race start, which was enough time to register for the race, get back to the car to dump my stuff, and walk back to the start line. I shivered in the wind for a few minutes and wondered if I should have worn a long sleeved shirt after all. Once the air horn blared and we were off, I was fine.

Edaville Rail Run is advertised as a trail run, which it is because it’s not on a road, but it’s not a technical trail. The entire 5 miles take place on packed dirt roads and sandy towpaths. Technically we did a bit of cross-country when we ran on grass for a few yards, but it was nothing. The course is also flat. If you’re new to trail races, I’d recommend something like this an easy introduction. If you’re used to mountainous trails, you’ll be sorely disappointed. Anyway, I like the course. It’s fun to run on something other than a road and certainly, I for one, would never complain about a flat course.

Before the race I kinda hoped that I would be able to PR, depending upon the course. The description of the course on the website wasn’t clear on how much of it would be trail and made it seem as if a part of the course was on a road. In reality none of it was on a road. Within a half mile, I tossed any hope of a PR out the window. I stopped looking at my Garmin for pace and just focused on running by effort.

This being in the Boston area, despite the small field size, the field was fast, fast, fast. Several people passed me at the beginning and continued to pass me all throughout course, even though I was putting down a decent pace.

One of the draws for me for this race was that we get to run by cranberry bogs. Although I lived in New Jersey for two years, which is the 3rd largest cranberry producer in the US, I’d never seen a cranberry bog and wondered what it was like. It’s really nothing impressive when the cranberries have been harvested. It looks like a swamp and in fact for a couple of miles that’s what I thought we were running next to. It wasn’t until I gave it some thought that I realized that the muddy swamps were cranberry bogs.

I really appreciated how well organized this race was. It’s clear that the organization that puts this on cares about runners. A cheer station with signs and music was set up. We passed it twice – once going out and then coming back in to the finish line. It’s super nice to have people cheer for you, especially so at a small race because you don’t expect it. At every mile,  there was a mile marker and a person with a stopwatch telling out the times as you ran by. This is a lot of work and I am very grateful to the volunteers who did this and for the race director for having this little perk for us runners. We love it.

If you’re confused about my mile splits and how I could have possibly ran 5 miles in 40:03, according to Garmin I only ran 4.9 miles. The course is listed as 5 miles, but it’s not a certified course. The timing company has the course distance as 5.1 miles (so they gave me a 7:51 pace). I looked at the route that Garmin tracked and there are no obvious errors in terms of how Garmin tracked me. I have no idea if I ran 4.9 or 5 miles, but 40:03 isn’t close to my PR, so it’s not something I’m fussing about.

The last 1/2 mile was fun because I chased down a couple of runners and passed them, including a much older gentleman right before the finish line. I had been behind him for a couple of miles, so it was nice passing him. 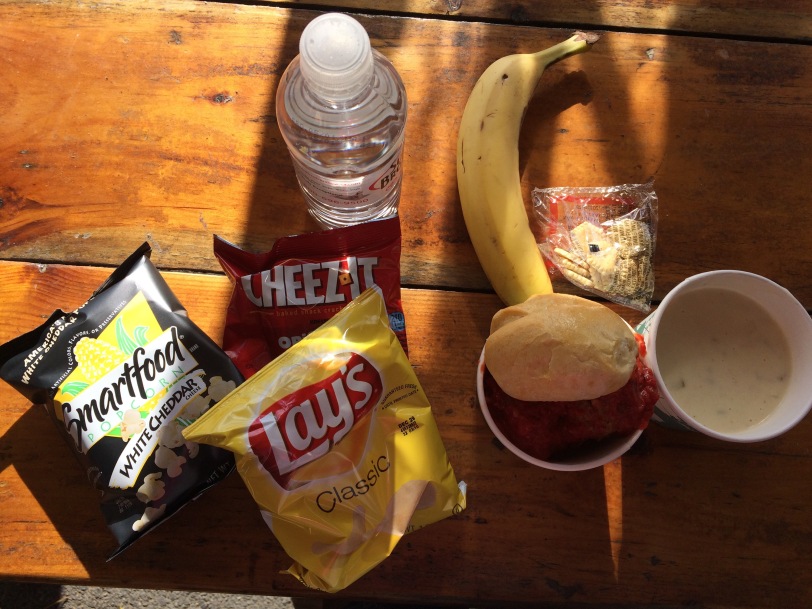 The other major draw for the Edaville Rail Run is the post-race food. I say this about a lot of races, but it’s no less true here – seriously one of the best post-race spread. I had a full meal. I got a cup of homemade clam chowder (delicious!) with oyster crackers and a cup with three large meatballs and a soft fluffy roll. I chowed down! I gathered up the rest of my food (chips, popcorn, and Cheez-its), grabbed a race shirt (because I registered the day of, race shirts were not guaranteed and could only pick one up after the race), and left for home because it was too chilly to hang out. Because of the speedy field, I was nowhere close to placing in my age group.

I really enjoyed this race. It’s a great local race that I’d recommend to anyone who lives in the Boston area. I loved having post-race clam chowder. I wish more late fall/winter races would have clam chowder (wishful thinking on my part, I know).

In the afternoon, my mother, my nephew and I went out to a large park to play. My nephew had a great time on the playground. After a half hour, we persuaded him to go “on a hike.” He was more interested in carrying sticks and small fallen branches. After an hour outside, he was tired and we went home. He’s such a delight and now that he’s talking like crazy, it’s really fun playing with him.