I spent my birthday weekend in Baltimore. While I know many residents of Baltimore are fiercely proud of their little city, it’s not exactly the destination that one thinks of when one ponders about a birthday getaway. But this trip wasn’t about me. It was about Bandit. 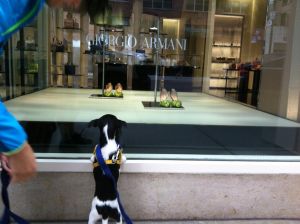 Oooh, those look like really nice shoes to chew on!

Many many months ago, Ben and I talked about where we should take Bandit for her vacation. Yes, we’re that crazy about our dog. We plan our lives AROUND HER COMFORT. Bandit has a yen for the good life. As a puppy, she demonstrated a keen interest in Giorgio Armani on 5th Ave. Her behavior is drastically different from when we stay at a Four Seasons compared to a mid-level hotel. At the Four Seasons, she immediately jumps onto the plush bed, imperially looks at us and the surroundings, and nods her head as if to say, “This will do, my little peasants.” At a mid-level hotel, she behaves like a normal dog, you know, sniffing stuff and wandering around. Anyway we decided that Bandit deserved a vacation (you know, because her life is so difficult being a spoiled dog and all) and started looking at Four Season and Kimpton hotels that were within a driving distance of NYC. When we realized that Baltimore had a lovely Kimpton and that on my birthday weekend, Baltimore would have a cool running festival, it was settled. We were Baltimore-bound for my birthday, but it was really for Bandit!

We drove down Friday afternoon after I was done with work. The expo was at the M&T Bank Stadium, which apparently no one liked (The Baltimore Running Festival conducted a survey after the races), mainly because where you got the bib and the shirt were at opposite ends. This wouldn’t be so bad, except the entrance/exit was right in the middle. During the drive down, I realized that I had forgotten my Flipbelt and fortunately for me, one of the vendors was Flipbelt. I had been meaning to purchase another one anyway, so it wasn’t a big deal to buy one at the Expo. The new version of the Flipbelt is wider and has some other features, but all in all, it’s still the same reliable Flipbelt.

For the first night, we actually stayed at the Renaissance, which was great because this is the closest hotel to the starting line for the half. I thoroughly enjoyed having a very easy race morning because 1) late 9:45 start and 2) the start line was around the corner from the hotel. We could even see the marathon course from our hotel window. The start area for the half was lively and fun. A live band played music and an announcer pumped us up. It was a brisk morning and thousands of runners were ready to run.

Because I ran Wineglass a couple weeks prior, I had no plans to run all out. My goal was to run relaxed and have a good time. I figured I would finish somewhere between 1:50 and 2:00. I left with the first wave. At no point in the race did I want to push myself. I wasn’t fully recovered from the marathon. Streams of people cheerfully passed me and I let them. Over and over I told myself that this race was about being relaxed.

The first three miles of the Baltimore Running Festival half ARE A BLAST!!!!! There were so many bands and such great crowd support. I loved it. I soaked in the race atmosphere and ran with a stupid silly grin on my face because it was so much fun! Usually when I’m running for time, I don’t really get to enjoy the race atmosphere because I’m too focused on running a specific pace and making sure everything is going according to plan. This time, there was no plan. I high-fived the children. I interacted with the crowds. I took photos! I sang the songs the bands or the boom boxes were playing. I did everything I can’t do when I’m running for a PR.

One of the great features of the Baltimore Running Festival is ALL THE UNOFFICIAL AID STATIONS!!!! The Running Festival encourages people to set up their own unofficial aid stations and boy, do the people go all out! So many beer stands! I saw tons of candy (I even ate some). People stood there with baskets of donuts (I saw them too late, otherwise I would have grabbed one). And yes, people had water and Gatorade for us too. It was lovely! I love, love, love all the unofficial aid stations. Thank you, people of Baltimore for showing us the LOVE. We LOVE BALTIMORE!

Another thing that I really remember about this race is that it’s hilly! You’re constantly going up. I’m sure we also went down, but I only remember going up. The route was pretty nice for the most part. It goes through all the different neighborhoods of Baltimore, including some blighted neighborhoods and a pretty lake, Lake Montebello. One of my favorite sections was a hilly street, but people were playing their jams loudly for us. Eye of the Tiger powered me up the hill; there’s no way to not run strongly when you hear this blasting through the speakers. Some of the runners around me even began singing along and mock boxing along to the beats. In this neighborhood, the houses were of a Victorian style and they were painted lovely bright colors. It was quite charming and just a lot of fun.

I also saw several fun signs and took photos of them.

The end seemed rather long because I didn’t know where exactly the finish line was. Going down S. Eutaw St. there’s a huge crowd of people roaring for the runners, but the finish line is still much further down. Finally I saw the finish line. I crossed and my time was 1:55:30. Perfect. I did exactly what I wanted to do.

I texted Salt to see if we would be able to meet up. She had decided at the last minute to do the half. Unfortunately we couldn’t meet up. Sad trombones.

Anyway I had a great time at the Baltimore Running Festival and recommend this fun race. And definitely stay at the Renaissance because it’s so convenient.

I walked back to the hotel to shower and meet up with Ben and Bandit (who spectated the race. Bandit didn’t like that so much. She wants to run in the races, preferably in the front.). Then we packed up and headed to the Kimpton a few blocks away, for Bandit’s vacation. Our Kimpton experience will be its own post soon.