Name of the race: T-Mobile Newport Liberty Half Marathon

Disclosure: I received a free entry in exchange for participating as one of the official race bloggers. Everything I wrote is my own opinion.

Tick, tick, tick . . . it’s countdown til Wineglass. My last 20-miler was completed two weeks ago. Now it’s the last minute tweaking and resting/tapering until my big goal race. The timing of the T-Mobile Newport Liberty Half came at a handy time for my marathon training. Run Less, Run Faster scheduled a long run of 13 miles, so a half marathon fit in very nicely.

We woke up early to drive to Jersey City, which was a breeze because of the lack of traffic early Sunday morning. We picked up a couple members of the Prospect Park Track Club by the park and we were all on our way. As usual the bib pick up was a breeze. This year the race shirt was a bright pink long sleeved shirt thanks to T-Mobile. It certainly was a vivid shade of pink.

We spent a good portion of the hour before the race at Starbucks. I had my usual pre-race (iced) coffee and croissant (food of champions). Then we met up with our friends of our old Jersey City running club. I was particularly happy to see Nell because we’re very good running partners. Or to be more correct, Nell is a fantastic pace bunny for me. In general she’s a faster runner than me, but not that much faster. Just fast enough to push me, but not too fast that I can’t use her to pace me. Plus she runs the most even splits (whereas I tend to bounce around more). I’m always a better runner when Nell’s around.

I wasn’t sure what I was going to do for this race. My tentative plan was to run at 8:20 pace if I felt good, but would drop down to 8:40 if legs were fatigued. When I asked Nell what she planned on doing, she reported that she intended to start at 8:30 and slowly move up to 8:20 if she felt good. I decided to stick with her for as long as I could.

The start corrals are self-seeded. Runners place themselves where they want to be based upon their intended pace. We started in the 8:00 pace corral. After a rousing singing of the anthem, the start horn blared, and the runners stampeded down Washington Blvd. There were over 2000 runners, which made the start a bit congested. I did my best to stick next to Nell, but I found it hard and eventually I ran behind her. While she efficiently trotted along (I don’t know how she effortlessly parts the crowds; I have to fight everyone), I bulldoggedly dodged and darted to keep up. I got a bit anxious because the first mile was a bit fast (8:08). We slowed a bit for the second mile, but I realized that this was a bit too fast for me. I’m rather prone to side cramps when I start too fast, so I redirected the focus back to me and reminded myself to “run your own race.” I let Nell go and fell farther behind her.

I slowed down some more and found a comfortable pace. Once I settled in, I realized that I wasn’t running all that much slower than her. Yes, I was behind her by about 10-15 seconds, but the gap never grew any larger. It was rather comforting to see her bright neon yellow shorts amidst the sea of runners. It was like my own personal guiding light leading me. I focused on running comfortably and knew that as long as I saw Nell in front of me at more or less the same distance that I was running even at an even effort. The only other concern I had were the occasional gusts of winds that I felt out on the course. They were at times strong and depending on the direction of the course, the winds helped you by blowing you forward or hindered you by blowing straight into your face. It seemed to me that the winds were stronger this year. Something I did differently during this race was that I started sipping Gatorade from the Simple Hydration bottle earlier. I usually don’t start drinking Gatorade until the second half of a race, but I accidentally missed water from the first aid station. It was warm enough that I wanted a little something, so I sipped from the Simple Hydration bottle. Then I decided to take small sips throughout the race instead of the few giant swallows that I usually do. It worked well because I was never thirsty or feeling hungry at any point during the race.

Another benefit to running the Newport Liberty Half is that I know the course extremely well. Not only have I ran this course several times, but large portions of it were my old running routes when I lived in Hoboken. Usually at a race, I don’t know the course, so I break it up in terms of miles. With Newport Liberty, I broke it up into the different areas: loop around home, through downtown Jersey City, Liberty State Park, back through Jersey City, and waterfront. I knew exactly how long each section would last and what to expect in each section.

Around the halfway mark, I managed to slowly catch up to Nell. We ran together for a little bit, but there were a couple of runners right in front of me who I found annoying. They were right in front of me, so I sped up a bit just to get in front of them. When I sped up, the faster pace felt more comfortable to me, like it was less work to be at that pace than the slower one. I decided to just go with it and continue on at the slightly faster pace. After the race, Nell told me that she wanted to keep up, but her legs weren’t having it. I moved along and attacked the rest of the course. A section of the course is along the waterfront at Liberty State Park which is always windy. This section was the physically the hardest section for me because I felt the wind the worst here. There was no one around me to draft off of. I was so happy when the course turned and the wind was no longer blowing right at my face.

The section of the course that leaves Liberty State Park is the one that I find mentally the toughest. While Liberty State Park is a lot of fun to run because it’s so picturesque, especially with the views of the Manhattan skyline and Lady Liberty, once you leave you’re back in the rather boring downtown streets, plus there’s a rather long incline in this section. Having done this race so many times, I knew the boring part wasn’t all that long (a little more than a mile) and then the fun part begins again. Up the incline, a few more turns, and runners are let loose onto the Newport waterfront. I love this section because 1) it’s home territory for me, it’s my old running route and I know it like the back of my hand, 2) so very pretty and nice to run on, and 3) the finish line isn’t far now. I’m tired, but I focus on running well and not slowing down (too much – slowed a little because of the incline).

When I passed the time clock at Mile 12, I quickly did the calculation and realized that if I sped up to an 8:00 pace that I could conceivably finish in sub-1:49. After running 12 miles, I wasn’t sure if my tired legs were up to it, but I decided to push myself and try.

Honestly, I totally surprised myself. I FLEW through the last mile – 7:36! A 7:36 after 12 hard miles of running! Who knew I had it in me! Another turn and we’re on the last stretch on Washington Blvd toward the finish line. I know there’s one more last right hand turn before we can see the banner. I push myself again for the last .1 mile drawing on all the training I did on having a fast finish. When I turn and see the finish line, I stop breathing, go anaerobic and do my best impression of Usain Bolt to sprint down  and catch all the runners in front of me. I see a little old man running quite fast and I’m determined to out-sprint him to the finish line. Do I catch him? Yes, I do. (Yeah, I’m proud of myself for beating a 71-year old man).

13.1 miles in 1:48:38. This is my second fastest half marathon. I’m really happy about how well the race went. I feel like all the marathon training has done a lot to improve my fitness and endurance. I’m especially impressed with how fast I ran the last mile. There’s no way I would have ever thought that I could have done that after 12 miles of hard running. After Wineglass is over and I take some time to recover, I’m going to focus on doing some more speed work and find a half to race to see if I can set a new PR late in the fall. 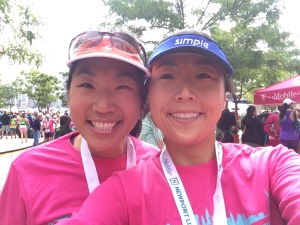 Nell and Me after the race in our pink shirts!

Nell crossed the line about a minute after me. We got food and met up with everyone else. Many of us were quite happy with our races. We got our free beers, sat around, dissected our races, and talked about other races that we have planned. We even got a chance to catch up with Mike Anis, a local celebrity runner (because he’s so freakin’ fast). Ben joked, “So Mike, did you sub-one hour?” We all laughed, but when he’s in top form, he’s not far off from it.

It was another fantastic race in Jersey City. If you’re in the area, I really recommend going over to do this race. Although there are a couple thousand runners, it has the feel of a smaller local race. Everywhere on the course, you hear runners cheering for other runners and giving high fives because the zigzag nature of the course allows you to see your friends. Friendly spectators held up signs (my favorite was “There’s no place like the finish line.”) and cheered for runners. After the race, runners hang out in Newport Square, relaxing on the grass and enjoying the sun. A live band plays music. It’s always a fun post-race atmosphere. The ease of getting to the race (it’s right by the PATH station) and the relatively low race fees also are big advantages to this race. If you really care about getting a finisher’s medal, this was the first year that there was one available. Personally I would rather go back to having lower race fees and no medals, but I understand that other runners may feel differently.

Thank you to T-Mobile Newport Liberty Half for giving me a free race entry. I really appreciate being able to participate as one of the official bloggers.