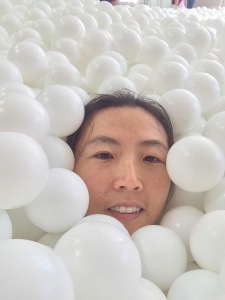 We jumped off a ledge and land in a giant pit of white balls. Welcome to Pearlfisher’s art installation JumpIn that promotes the transformative power of play! H. (the same friend who saved me in Miami) asked if anyone was interested in joining her. I frantically let her know that she had to get me an appointment with her (which she did because she’s awesome that way).

I love ball pits and haven’t been in one in FOREVER. Washington, D.C. had one, but a friend who went there said that it was crowded, not as deep as it appeared, and not nearly as much fun as the press had made it out to seem. I had thought about going down to DC to go visit the ball pit, but decided against because of her experience. So when this opportunity appeared, I HAD to go!

We LOVED it. In order to control the crowds, people had to sign up for an half hour appointment slot online (which went quickly). We signed our lives away, took off our shoes, and jumped in. I can’t describe the feeling of flying in the air and landing in a giant ball pit. I sank into the balls and it’s extraordinarily difficult to get back up. I flailed around until eventually I was able to get up, only to clamber back up onto the edge to jump some more. H. and I threw our bodies into the air. You can see short clips of our jumping on my Instagram page: Jump1 and Jump2.

It was SUCH A BLAST. The 30 minutes went by too quickly. Just because you’re an adult, doesn’t mean you can’t play like a kid.

JumpIn will be in Manhattan until Sept 18th. If you’re able to get one of the few available appointments, you have to go! It’s free (but they do appreciate a $5 donation). 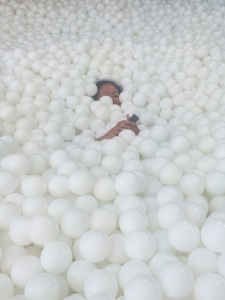