This post is a mishmash of things that went on in my life.

1. You might be familiar with the concept of sandbagging, or when a runner falsely states she’s slower than she actually is so that she can blow away the competition during a race.  A good way to think of bottom feeding is the opposite of that; it’s deliberately finding a race with slow competition in order to get an award.

If you want to learn more about bottom feeding and how to increase your odds of getting an AG award or better, go on over to Salty Running to read my latest post on bottom feeding. 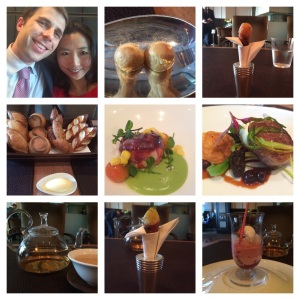 2. Last week Ben wanted to surprise with a night out. Unfortunately his plan of taking me to Daniel didn’t work out because of subway problems. They offered to seat us in the less desirable lounge because we missed our reservation, but we both felt strongly that the we wanted the experience of eating in the main dining room. Instead of dining at Daniel, we went to Per Se to have dinner at their salon. We each had an entree and shared the five-course dessert tasting menu. The dessert tasting menu was heaven as usual!

The dessert tasting menu constantly changes (except for the famed Coffee & Doughnuts (freshly baked cinnamon sugar doughnuts with a cup of cappuccino semifreddo topped with foam). It’s our favorite and many others as well. They can NEVER take it off the menu. 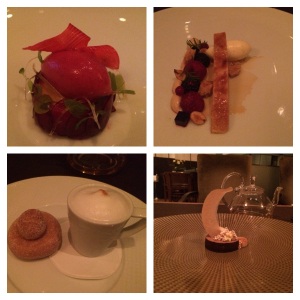 We greatly enjoyed the various little bites of sweet, tangy, crunchy, cool, and creamy. I didn’t include a photo of the handmade chocolates that come at the end and the beautiful chocolate cream filled shortcake cookies that they give you as a parting gift. It’s $65 for the dessert tasting menu, which is a bit of a splurge, but a very good deal if you have a sweet tooth that you want to indulge on a special occasion.

3. Thanks to Yelp, I got invited to an Elite Yelp event for an Escape the Room type game hosted by Real Escape Game. I dragged Ben along in case there was a no show and he could get in (which he did). We’ve done these escape games before (including one produced by Real Escape Game) and absolutely love them. I didn’t know the other Yelpers at the event, but we quickly worked together as a team. We did the Escape from the Mysterious Room. We had one hour to escape out of a locked room. It was really fun tearing apart the room to find tools and clues to get out. In the last five minutes we had the final locked box that contained the key to our escaped. It looked like all hope was lost because we couldn’t figure out the clue, but thanks to the persistence of one of the group members and sheer luck, she figured out the combo to unlock the box. With a minute to spare, we escaped! 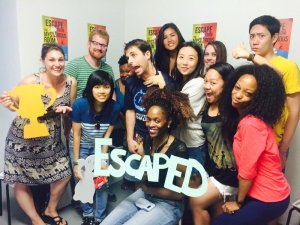 It’s a pretty hard game. We were told that there’s only a 10% escape rate. The game master tells you the answers and how things are supposed to be solved. Even after she explained how the last clue was supposed to be solved, we didn’t get it. Still these escape games are tons of fun and we plan on doing more.

4. Because Ben and I are narcissistic media whores, we love it whenever we find ourselves in promotional material. The Newport Liberty Half Marathon emailed prior participants to remind us that we should register for the upcoming race. Guess who you see on the left hand side of the photo? 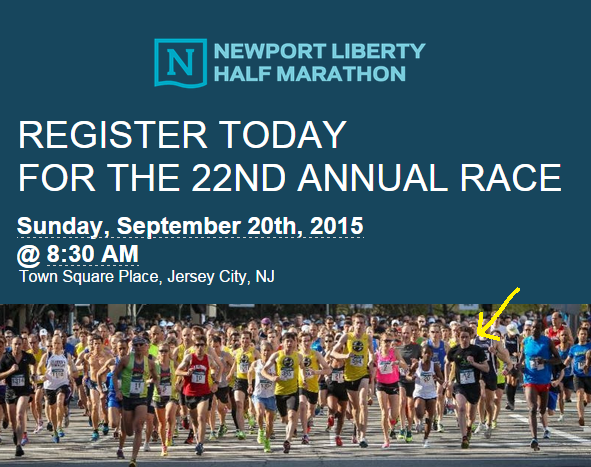 A few weeks ago, Grape Gallop posted a preview clip of an episode of Running that featured Grape Gallop. At Seconds 4-7, you can see me on the right hand side. I desperately want to see this episode to see if I’m elsewhere on the show, but ever since we moved and changed cable providers, we don’t get Yes! anymore. 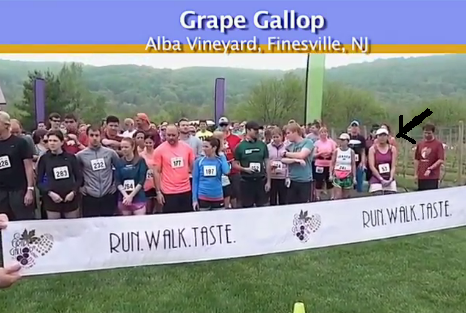 5. And in keeping with Ben’s tradition of NEVER training for anything, he completed the NYC Triathlon this weekend. Considering that he was sick (came down with a mysterious cold a few days before) and barely trained (hasn’t ran in forever and went on his trainer all of five times in the last month), he finished in a respectable time of 2:42:05. Don’t ask me how he does it.