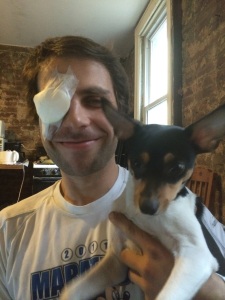 Ben hurt his eye Friday morning when he was trying to fix something in the shower. A piece of plastic flew into his eye and got stuck. I already left for work and Ben decided not to tell me because he knew I was busy with work. Obviously if he had called, I would have gone straight home. Ben spent several hours trying to find a doctor who would see him. Surprisingly, even it was an emergency situation, many doctor offices were unwilling to see him that day. Finally the 15th place he called agreed to see him and he finally got taken care of in the late afternoon. When I came home, that patched-up face greeted me. He’s fine. His eye is fine. He was in pain that night and yesterday, but he feels pretty much back to normal today.

Our house is slowly coming together. Getting working running water took a while because our plumber isn’t a very good plumber. He’s a nice man, but really, he’s a terrible plumber. He hooked up the pipes from the drains to a non-functioning pipe so whenever we turned on the bathroom sink or the shower, the water leaked out of the ceiling. Finally the water works in our house. We have hot water. We don’t have leaks. We have heat. Some day we’ll have a working kitchen.

We’re moving the rest of our stuff from Hoboken to our new home tomorrow. Soon it’ll be official that we’re Brooklynites.

While we didn’t have pie on Pi Day, we did have a lovely brunch at Blessings. It’s our favorite brunch place in our new neighborhood. The owner, Lily, is very sweet (as sweet as her incredible bananas foster French toast). We quickly established ourselves as regulars by going every weekend. Last weekend, we went twice. The food is very delicious. The seating is cozy. There’s live music on Saturday and Sunday afternoons. It’s very clear that this little cafe/restaurant is a beloved neighborhood joint. If you’re ever in Brooklyn, scratch that, if you’re ever in New York City, make a trip to Blessings. It truly is one.