A Bird-in-Hand Half is worth Two Horseshoe Finisher Medals

Name of the race: Bird-in-Hand Half Marathon

I had been looking forward to the Bird-in-Hand Half Marathon for over a year. I learned about it last year from Runner’s World when Bart Yasso went to Lancaster County to run with the Amish. I loved that article. I really wanted to run Bird-in-Hand HM last year, but our packed fall racing schedule made it really difficult. We decided to do the race in 2014 and planned our racing schedule around it.

Bird-in-Hand HM has character in spades. It’s a small local race that supports the local community. Bird-in-Hand is in the heart of Amish country, so it’s Amish this and that up the wazoo. I loved it. We passed several horse-and-buggies as we drove to the expo. The expo was held under a large tent right by the start line. It was pretty small, but they were selling fresh hot apple cider donuts, so that made the expo a win for me and Ben. 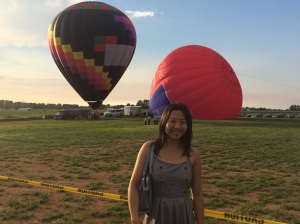 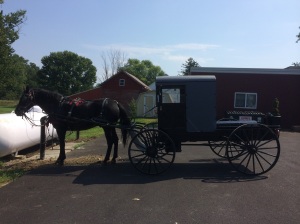 The Amish community was out in full support for this race. Several community members were volunteering and/or running in the 5K or half marathon. I loved the spirit of this race. The night before the race, there’s a pasta and Amish pizza party dinner for $11. The food is all-you-can-eat buffet style. The pasta was overcooked, but the meatballs were really good. I filled up on garlic bread and meatballs. If you’re curious what an Amish pizza is, it’s just a pizza made by the Amish. For dessert, we had our choice of apple die (delicious) and shoofly pie and ice cream. While we were eating dinner, we watched runners cross the finish line for the 5K. 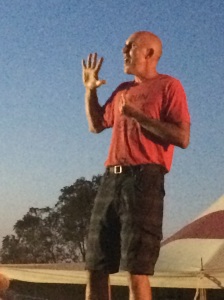 Ben and I got a bit confused by the Amish culture. We knew that in general the Amish culture eschews technology and values modesty, such that photography of faces was considered to be immodest. We wanted to respect their values so we did our best to avoid taking photos of them. But after the 5K, we saw a group of young Amish teenagers handing over a camera and asking another Amish teenager to take a photo of them. After that we figured this Amish community must have much more lax standards about these things.

After dinner we listened to Chris McDougall of Born to Run talking about his experience with the Tarahumera. He seemed like a nice guy. He gave some updates to the characters in Born to Run, which the audience seemed to really appreciate. Ben and I never read the book (though we’ve heard of it), so we had no idea who these people were.

After the talk, we walked over to the s’mores bonfire. Yes!!!! Not only was there one of the largest bonfires that I had seen, they set up an area where you could make s’mores. Ben and I each had one. We roasted a marshmallow each and made our s’mores. I hadn’t had a s’more in soooo long. I love my s’more, but I could only eat one. I can’t believe that as a kid, I gobbled several in a row. It was the perfect night before a race. 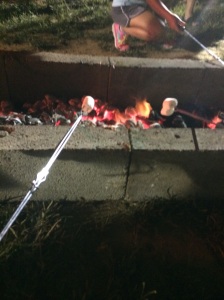 he morning of the race is really cool because there’s a hot air balloon race that starts 15 mins before the half marathon. You can see hot air balloons filling up with air and then gently floating away. It is one of the neatest race morning experiences that I’ve had. 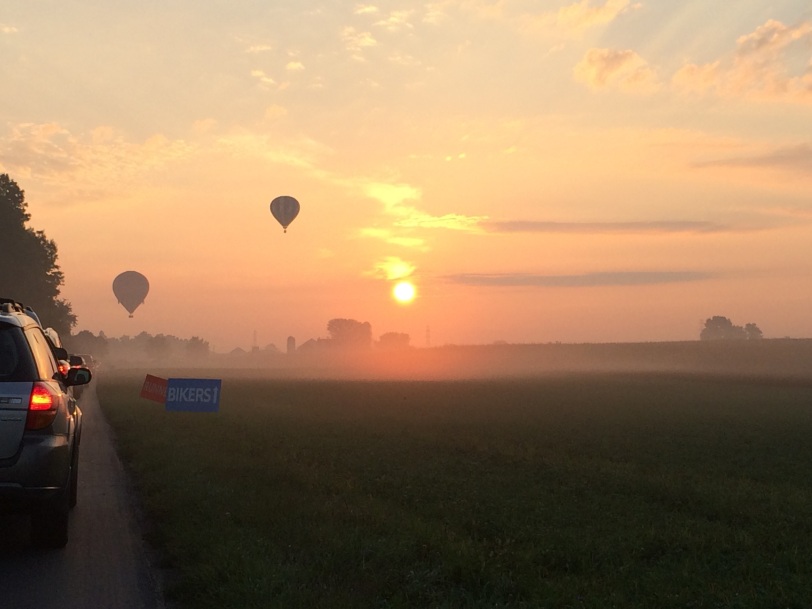 Morning of Bird-in-Hand Half Marathon

After an unusually cool summer, hot humid summer weather came out in full force for race day.  Because of the incredible warm conditions, I made up my mind to take it easy and try to run a 2-hr half. I told them that I was treating the half as a well-supported training run, which Ben fully supported. That day was no day to PR. I found the 2-hr pacer and ran with him and the group for the first couple of miles. I got tired of dealing with all the congestion, so I decided to run a little bit faster to lose some of the people and get some space. Although around Mile 10, the the 2-hr pacer caught up to and passed me, I have no regrets about running a bit faster because I just couldn’t deal with the crowd.

Several Amish were there to spectate, including watching from a horse-and-buggy. I really liked running with the Amish because when they ran by, the spectators would yell the runners’ names. Ben and I also really enjoyed having the water stations manned by Amish children. They were very organized and well-behaved. The children stood in front of the tables holding out cups of water or Gatorade while chirping “Water! Water! Water!” or “Gatorade! Gatorade! Gatorade!” It was like listening to a chorus of crickets. 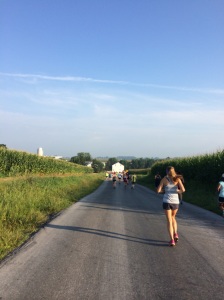 The course was on the country roads alongside cornfields mostly. At one point, we ran through a farm on their dirt road, but we ran on asphalt. The countryside was scenic. The rolling hills were a bit much in the heat. I overheard conversations from other runners who dreaded the hills because of the heat. I didn’t mind much. I did my best to keep running as easy and relaxed as I could.

It was soooooo hot.I have no idea how I managed to keep running the entire time, except that the well-placed ice coolers with ice were sorely needed. I could always tell when I was about to approach an ice cooler because I would see runners in front of me not running the tangents. If they were over to the far side of the road for no visible reason, I knew an ice cooler was there. Every time I encountered one, my hands dove into the ice to grab handfuls of ice cubes. One handful of ice were dumped into the front of my sports bra and the other handful to the back. That was the only thing that kept the race bearable. As I ran, the ice bounced up and down creating beat of CHA-chink! CHA-chink! CHA-chink! Also thank goodness I always run with a Simple Hydration bottle. This meant that I had something to drink whenever I needed it. Although the water stations were well-spaced out, on a scorching day the water doesn’t come fast enough. I also grabbed ice for the bottle so that I always had something cool to drink. Some of the Amish set up hoses to spray water on the runners too. Every time I felt really tired and hot, I reminded myself that this was only a training run and I was *not* racing. All of these things were necessary to survive the hot, hot, hot miles.

The best moment in the race was around Mile 10 when there was a Rita’s Water Ice stand. Small cups of Italian ice were being handed out. It was the best thing I ate that day. The frosty cold Italian ice did a lot to cool my body and made me believe that I was going to survive running 13.1 miles. Also there were a couple of camels. No, I wasn’t hallucinating. There really were camels. I regretfully didn’t take photos because I was in disbelief. It was really hot, in case you didn’t get it by now.

Finally I ran across the finish line. I heard Ben cheering for me. He also took it easy and finished only a few minutes before I did. I adore the finisher’s medal that they gave us – a horseshoe with a plaque nailed to it. The horseshoe is an actual old horseshoe and an Amish farmer(s) worked on creating all the medals. It’s definitely the coolest finisher’s medal that I’ve ever received.

Ben and I had an early lunch to recover. It was a very hearty meal of hot dogs, hamburgers, and barbeque chicken, plus drinks.

Happily I was able to meet up with The T-Rex Runner after the race. You can read her race report by clicking on the link. I’m a long-time follower of her blog. She has an interesting engaging style of writing, plus I really admire her honesty about her feelings and thoughts on various issues, some lighthearted and some serious. It’s always really cool to meet people in real life whom I’ve gotten to know online. I used to worry whether these online people would be as sane or somehow really different from what our interactions were like online, but always, I’ve had good meet ups. So now I know I just look forward to meeting them even if it’s only for a few minutes. If any of my readers ever run into me at a race, please come up and say hi. I’m always delighted to meet you. I may be a bit socially awkward, especially if you catch me off-guard, but that’s just because I’m so surprised that I don’t know how to react. But believe me, you would make my day.

Me and T-Rex Runner

I really love this half marathon. It’s an incredible EVENT, not just a race. and there’s nothing like this race in the US. I love small local community feel and all the character. Despite the heat, I loved every moment of this race. So yes, I absolutely recommend that everyone should do this half marathon at least once in their lives.