Note: I’m talking about our last full day in Peru because I have the photos for it on my IPhone, whereas most of the other photos from this trip is on my memory card. My camera is fixed and is being shipped to me. When I have it back again, I’ll be able to post stuff about Lake Titicaca and the trek. 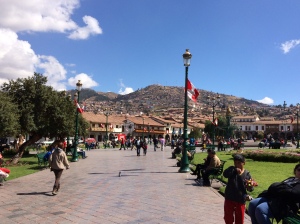 Cusco is a beautiful city. It’s fairly large and bustling with people. The main plaza, Plaza de Armas (which means Plaza of Weapons), is the most grand plaza in Cusco, in part because of the striking presence of Cathedral of Santo Domingo. No matter what time of day (or night), there are several people milling about the plaza. Surrounding the plaza are cathedrals, shops, restaurants, and cafes. Musicians, buskers, people trying to sell you souvenirs (especially the ubiquitous Peruvian hats), and sly folks with a cute lamb who charge you for taking a photo are found here. On a beautiful afternoon, it’s a great place to people watch.

Cathedral of Santo Domingo was incredibly beautiful on the outside and I’m sure it was incredible on the inside too. I read that it was a wonderful art collection, but we didn’t go inside. We didn’t have much time in Cusco and the little that we did have, we wanted to be outside wandering around.

My favorite place in Cusco was Mercado Central de San Pedro, also known as San Pedro Market. We came here on the recommendation of our tour guide, César, and boy, were we ever so glad we came. It’s no ordinary market. It’s a large warehouse space that houses hundreds and hundreds of stalls and vendors of just about anything Peruvian that you would like to purchase. César assured us that this is where locals go to shop, the prices were fixed (no haggling, we hate haggling), and the prices would be displayed for us to see. Peru, like many less wealthy countries, have a two-price system (one for locals who are in the know and one for tourists/foreigners – even Peruvians who aren’t local to the area could be charged a higher price). The two different levels of pricing don’t exist for everything, but you do need to be vigilant.

When I entered San Pedro Market, my senses went into overdrive. I didn’t know where to start looking, touching, smelling, or hearing. There were rows and rows of stalls. Vendors were hawking their wares. Smiling ladies beckoned me and tried to ply me into buying freshly squeezed juices (which looked awesome). Little old grandmas called out to me to tell me what they were selling. Other vendors quietly ignored me while I stared in rapt fascinations over the goods and took copious photos. Each row was dedicated to single class of good. There was a bread row, where several different types of bread were sold. There was a fruit row – an explosion of color and shapes of fruits known and unknown. There was a cheese row with stacks of yellowish-white disks. There was a potato row; potatoes are native to Peru and still play an important role in their diet. Did you know that there are around 5000 varieties of potatoes, of which 3800 can be found in Peru? I ate several kinds of potatoes that I can never seen before while in Peru. Along wiht roasting, boiling, frying potatoes, Peruvians also consume chuño, dried potatoes, typically cooked into stews and soups. The meat row had tons of freshly butchered carcasses, including some rather unappealing animal parts (hooves, snouts, muzzles) reminding me that meat comes from an animal. Ben and I happily wandered around looking at the goods for more than an hour. 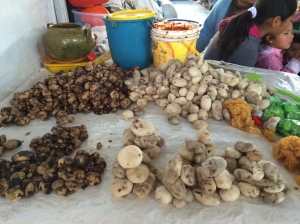 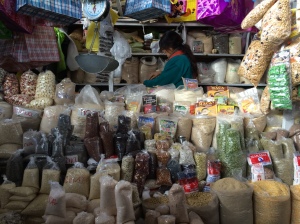 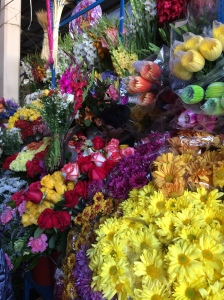 Herbs
Not all vendors had stalls inside. Some chose to sell just outside the market.

After all that walking around, Ben and I were famished. We found ourselves in the “food court” area. There are several food stalls where you can eat in San Pedro Market. We chose to have a big bowl of chicken soup. Chicken soup is very popular in Peru, particularly as breakfast. Growing up in a Korean household, I’m used to having more savory items as breakfast. Usually breakfast is whatever is left over from dinner. I often had chicken soup for breakfast as a kid and still do as an adult. Ben also prefers a savory breakfast, so he’s gung-ho about eating leftovers for breakfast. 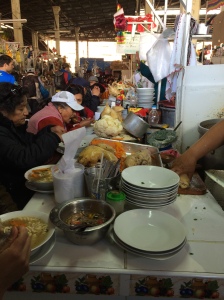 We came across the chicken soup row, actually rows. It was double-sided. Hugs vats of broth and more vats for noodles lined the center. Tubs of vegetables and boiled chicken were in front of the vendors. Stacks of empty bowls were quickly filled with broth, meat, noodles and vegetables and handed over to hungry customers. There were many people selling chicken soup. We walked up and down each row. In this particular area, every vendor was selling a big bowl of chicken soup for 5 soles (or approximately $1.79 USD). We observed that the process of making chicken soup was identical for each vendor and it was just a question of which type of noodle we wanted (curly, spaghetti) and some minor differences in vegetables. The same big vats of broth and noodles were being ladled out by the vendors, which reinforced the notion that everyone was getting the same soup. Surprisingly despite the fact that the soup was same everywhere, we actually had a hard time deciding which chicken soup stall we wanted to eat from. Finally we picked a place based on whether seating was available (it’s very crowded). In two seconds soup was in front of me. 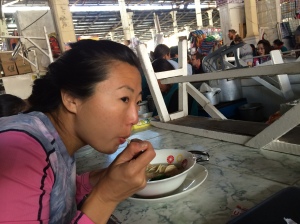 The soup was delicious salty goodness. It was the best cheapest lunch that I’ve ever had. Paying less than $2 for that big bowl was soup was the deal of a lifetime. Later on, we found out that we could have gotten a big bowl of soup for even less if we had walked out to the margins of the market. Out of the sides, there were more varieties of food that you could buy (platters of meat, rice, and beans, stews, fried chicken, etc). Even though we got the “expensive” chicken soup, it was still very very very cheap. And delicious. We both definitely recommend that when visiting Peru, you go see San Pedro Market and have lunch there.

I’m not the only one who thinks San Pedro Market is pretty wonderful. This blog post has a cool list of things that you can see at the market. Yes, I saw each and every one of those items.