Congratulations to Em, who won my PRO Compression socks giveaway! Your socks will be in the mail tomorrow.

Ben and I traveled up to Boston this past weekend for a mini family reunion for our nephew’s first birthday. In the Korean culture, the first birthday was cause for great celebration because of the high infant mortality rate in the olden days. The first birthday celebration is called dol. A traditional dol is an elaborate ceremony involving prayer, an extravagant food banquet, traditional clothes, and a game, called toljabee. I’ve gone to several dols growing up and it’s always a fun time. Everyone is happy and there’s lots of good Korean food. 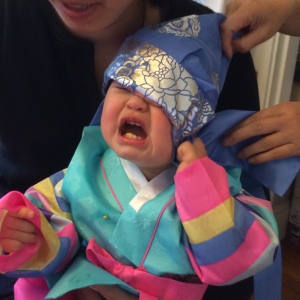 For the dol, the infant is dressed in traditional clothes involving colorful jackets, pants, socks, and hat. We dress my nephew in his clothes. Immediately he wanted nothing to do with it. I think it was the first time he learned that he was half Korean (his father is Canadian) and he was terribly distraught (see photo on left). He howled and howled. We quickly took a few photos during the few minutes when he was worn out from crying and hadn’t gotten his second wind. He was fine once he was back in his usual clothes. 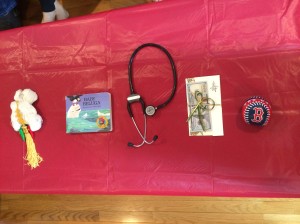 The next big drama was when we tried to get him to do toljabee.  Toljabee is a traditional Korean fortunetelling game. Several different items that represent different outcomes are laid out. The one the child picks is supposed to foretell his future. The items that are laid out can differ from family to family, but the usual ones are a skein of thread (for long life), money (for wealth), and book (for scholar). We included a stethoscope (for being a doctor) and a ball (for being an athlete). Naturally being Korean my mother wanted him to pick the stethoscope, while the Canadian side of the family wanted him to pick the ball. This was too much pressure for my nephew and he wailed away again. I don’t blame him. You’re only one and already you’re expected to pick your destiny! Talk about high pressure!

Finally he calmed down enough to grab something. He yanked the stethoscope and my mother smiled in triumph. So, now we know what he’s going to be when he grows up.

We couldn’t stay long because of my work, so it was a quick overnight trip. It was lovely seeing my family after not seeing them for several weeks.

Do you have any fun heritage traditions that you celebrate?