Run like Hell-th was our first 5K of the year. Normally we do a 5K in March, but between traveling, work, and other races, we didn’t find any time for one until now. I have a love/hate relationship with 5Ks. I love the idea of doing them, signing up, training, the feeling of accomplishment, and doing post-race analysis that go along with 5Ks. I HATE just about every moment when I’m running them. The deceptively “short” distance is HARD. I quickly launch my body into Painland and I grimace and tolerate it for as long as I am able.

Run like Hell-th was in Bayonne Park, which is a few minutes south of where we live in Hoboken. I wish race directors would give better instructions to race participants on where the race is. While I’m sure directions are perfectly clear to locals, there are out of town runners who want to run your races too. I can’t tell you the number of times we looked at directions for the race, where it would say something vague like the start line will be at the square. Where is the square?!?!!!! Or worse, we simply have the name of the town for the race and nothing else. We simply drive to the town hoping that the town is really small so we’ll either accidentally stumble upon it or the locals will know what we’re talking about when we ask where the start line is. While the directions for this race were not this bad, we drove to Bayonne Park and wondered where the race was. After a couple minutes, we found some cones and a volunteer. It would have been nice to know that we should have driven into the park where there were plenty of parking spots really close to the start/finish line, rather than park farther away and walk over.

It’s a rather small race with just over 200 participants for the 5K. They didn’t use any chip timing, so we had the old fashion method of recording our times by having one person push a button every time a racer crossed the finish line and another volunteer took the perforated edge of the bib in order that we crossed the finish line.

We ran into some people we knew from other races. It was fun talking to them and seeing how their training was going. I really like the small cozy running community around Jersey City. We like seeing familiar faces and people are really supportive. For example, at the start line I chatted with a woman (who was the eventual overall female winner) and at the turn around points we both cheered for each other as we passed by. A fun character whom we met was a guy wearing a Mexican wrestling lucha libre mask and body suit. He was quite interesting. I have no idea how he can run wearing a mask. I would feel too hot and like I couldn’t breathe. But he was able to run and was ahead of me the entire time.

Although Ben and I came into this event eager to see what our bodies could do, neither one of us had a particularly good race. Ben finished one minute off his PR. Subjectively speaking, I felt that I had a bad race. I was hoping to run a sub-23 5K, and barring that then at least beat my 23:32 PR. I wanted to do even splits and aimed to run at a 7:20 pace. I settled behind Lucha Libre guy and used him as my pace. My first mile was at 7:18. I was happy.

The first mile had significant head wind. Getting a 7:18 pace with a head wind took its toll me and it showed in the subsequent miles. I ran a 7:48 for the second mile and a 8:10 for the third mile. Yup, I pretty much fell apart. Reluctantly I fell farther and farther behind the Lucha Libre guy. More and more runners passed me. I got a terrible side stitch during my third mile. I felt like I was running in heavy mud for the last two miles. Ben thinks the course with its double loop and frequent turns dinged us. I agree it’s not a PR course, but I’m less bothered by the turns than Ben is. I don’t like tight turns (especially 180s), but as a slower runner than Ben, the turns slow me down less than they slow Ben down. I think for me, the wind and that at that point, my legs hadn’t still fully recovered from the Cherry Blossom 10-Miler were the bigger factors in my sub-par performance. Once I realized that PRing was not in the cards, then all I hoped was that I would run a sub-24 5K. I missed that impromptu goal as well.

Not all race days are your days and this certainly wasn’t mine. While it is a decent time, I’m not happy with the time because it doesn’t reflect what I feel I’m capable of running. But to put everything into perspective, the 24:08 is the second best 5K time I have (for a fair course, I have  fantastic 5K PR for a short course that I don’t count). The fact that I can be disappointed in my second fastest time ever is a sign of how much progress I’ve made as a runner. Plus this performance was good enough for 2nd place in my age group.

We really like the sports management companies of Practice Hard and Sports Action Reaction because their races are so well organized. Everything starts on time. The courses are perfectly measured and the mile markers are on the spot. They usually have timing clocks on the course. The post-race food is good. The bagles were awesome; I had asiago bagles, which are hard to find on the East Coast I find. The brochure promised that there would be post-race veggies, but there were no vegetables. Just the usual bananas, apples, and oranges. There were very few snafus with timing. Another runner crossed the finish line after me, but he tried to brush past in in the chute. A volunteer was very quick and insistent that he stayed behind me until they got our bib info. The time they recorded for me was exactly the time I got on my Garmin, so I’m quite convinced of the reliability of their timing. I thought the park was really lovely (or would be lovely when the leaves are out, it’s a bit barren right now). The somewhat narrow lanes and several turns in the course make this a less than ideal route for a fast 5K, but I can’t complain how efficiently the race was handled. 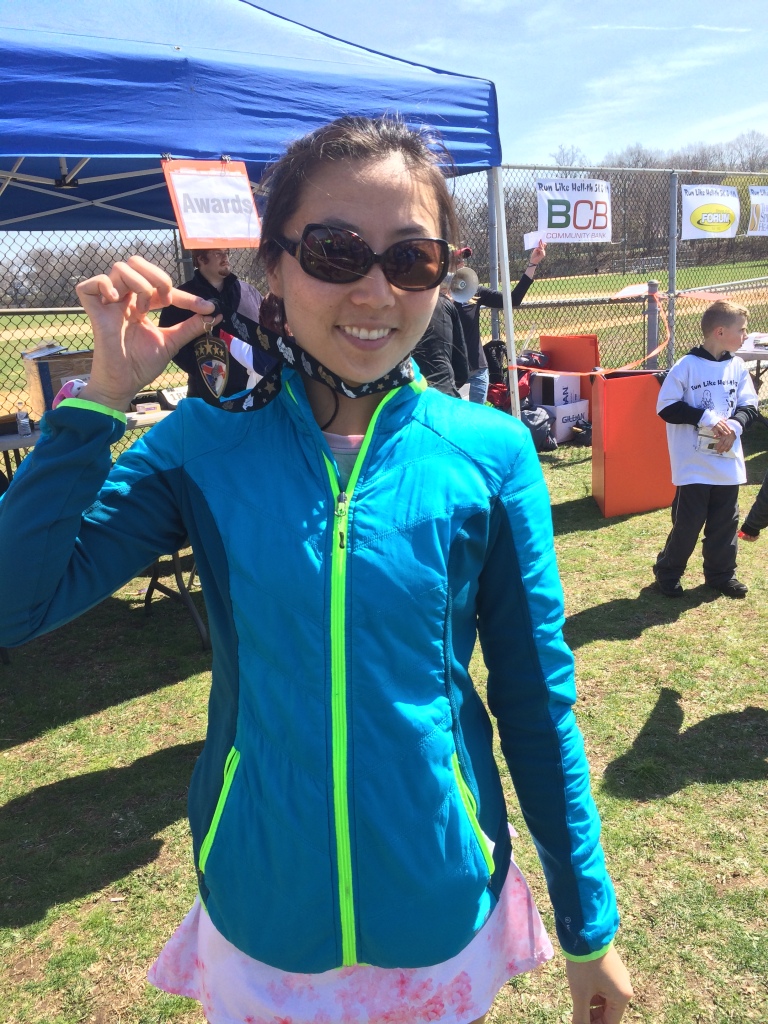 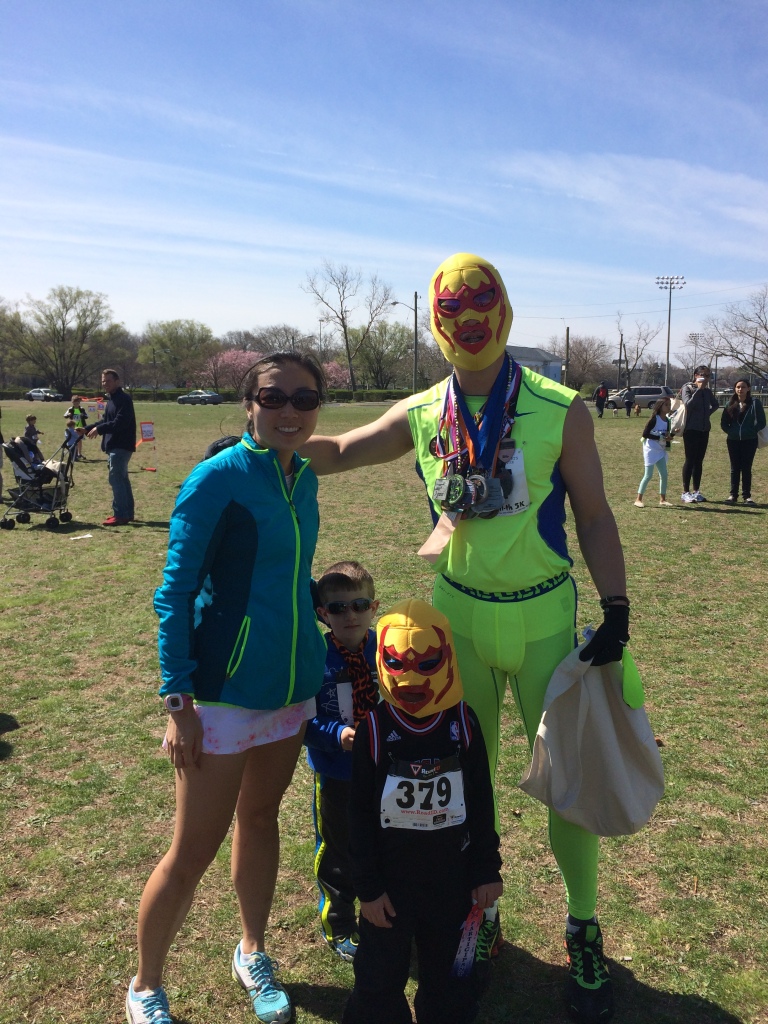 Me and Lucha Libre Guy