How Do You Like Them Apples? Apple Chase 5K/10K Race Report 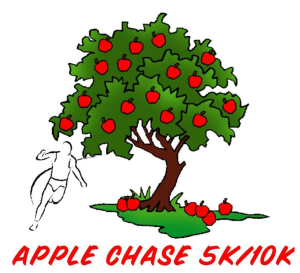 Swag: Technical t-shirt, coffee mug, and some free samples of a muscle ointment

Why I like them apples just fine! Ben and I are both really glad that we did the Apple Chase. We were a little reluctant before getting to the race, but for different reasons. I signed up because I wanted a shorter distance race before the Cherry Blossom 10-Miler in DC next week. I wasn’t sure if I was going to run because it was raining on Saturday and forecasts predicted that it would continue to Sunday (plus there would be strong winds). I was reluctant to run in the rain and wind. Ben didn’t want to do the race because he thought it was a bit too far (40 mins away) for a 10K. But since our friend, Hernan, and I had signed up, Ben signed up too. When we woke up on Sunday, it was overcast but not raining.

We got dressed and left for the race. I anxiously watched the skies for rain as we drove. We arrived with plenty of time (even though we only had a vague idea of where the race was). Lots of free parking was available. Because it was cold, we were grateful that the high school was open and that bib pick up was inside. I appreciated having a real restroom (though there port-o-potties outside) and a warm place to wait. We waited inside as long as we could. Then the announcer forced all of us out into the cold. Because it was cold and windy, I chose to keep my Swirlgear running jacket on. This was fine for the first mile. After that, I took off the jacket because I got too warm. The jacket is nice and light, so even though I had it tied around my waist, I didn’t notice it while running.

I ran with my Simple Hydration bottle, even though there were plenty of water stations. I really like having the freedom to drink whenever I want to in a race. Because I tuck the bottle into a running belt, I don’t have to carry anything in my hands. There were definitely moments in the race when I was thirsty and glad that I could drink right way instead of managing my thirst until I got to a water station.

Before the race, as our usual tradition, Ben asked me what I plan on doing. I thought it over and announced, “I’m not sure how I’m feeling. I’ll run the first mile at an 8 min pace and then see how it goes. If I feel good, I’ll run faster. Otherwise, I’ll stick to 8 min miles.” He thought it was a sound plan.

As usual, I STARTED TOO FAST. The first mile split was 7:44. Oops. I felt a bit frisky, so instead of slowing down, I thought I should continue running at this mad dash pace for as long as I can. I lasted for four miles. The problem is that in a 10K, the race is 2.22 miles longer. But while I was running at that pace, it was glorious. I felt good for the most part. A girl ran next to me for about a mile and half near the beginning. I could tell from her heavy labored breathing that the pace we were at was much too fast for her. It was too fast for me. But she gamely tried to keep up with me for as long as she could. She dropped back a little and then ran a little harder and faster to keep up. Eventually she dropped back even more. I heard her footsteps fade away and just when I thought I lost her, I heard her footsteps roaring back. Eventually I stopped hearing her footsteps altogether. I was a bit sorry at losing her because her company occupied my mind.

I pretty much ran alone. I knew the people in front of me were too fast for me to run with. Some runners passed me. I let them go. I knew I couldn’t keep up with them. I can’t remember if I passed anyone or not. At around Mile 4, I developed a small side stitch. Luckily it went away, so it didn’t slow me down or stop me. But I did run out of steam. I slowed down (not because of the side stitch), but because I just plain didn’t have any more speed left in me. I started too fast and now I was really tired. I kept seeing 8:00+ pace, so my goal at this point was to hold it together and not completely fall apart. I accepted that I couldn’t run a sub-8:00 pace anymore, but I refused to let myself slow down to 8:30 pace. I forced myself to run as close to a 8:00 as I could.

I was happy to see the Mile 5 marker and I began counting down to the finish line. The last .7 miles were tough. I was soooo tired. It was all I could do to not slow down. When I turned, I saw the high school and it cheered me up because I knew the end was near. When a volunteered yelled, “The finish line is just after one last turn,” I almost threw my arms around him because at that moment, those were exactly the words I wanted to hear. I could see the finish line and I threw myself into one last gear so that I could finish strong. For the last few months, I’ve been practicing my kick in my training runs by sprinting at the tail end. I’ve been making it a goal to finish faster than the mile pace that I had been running. At the last turn I saw the finish line, Ben, and Hernan — in this order. Ben and Hernan cheered and yelled at me that I was about to set a new PR. I sprinted as fast as I could to cross the finish line before the clock turned 49 minutes.

My final time was 48:42 (7:51 pace). I was really happy. I ran a solid race, even though I had a spectacular positive split. The rain held off, but it was slightly windy. I could feel the wind when I was running back to the finish line.

We went back inside to the school to wait for the awards ceremony because it was cold outside. I got a nice 10-min massage from Elements Massage while waiting. 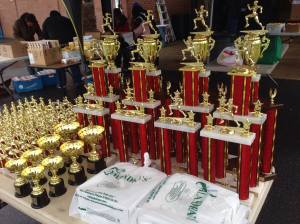 There was some confusion with times and placement for the top male runners. I don’t know what exactly happened or how it got resolved, but eventually it did and they announced the winners. Out of all the little races that I’ve done, I’m the most impressed with Apple Chase when it comes to awards. Not only do they give sizable trophies, but they also hand out cool cash prizes. The overall winners get these huge trophies (plus the first place winner receives an apple pie from Calandra’s Bakery). The age group award winners get smaller trophies. In addition Apple Chase gives out awards for fastest runners from Pompton Plains/Pequannock, fastest husband/wife team, and cash prizes of $50 to the male and female runners with the fastest mile time for both the 5K and 10K. 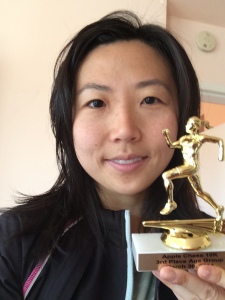 With my 3rd place AG trophy and Swirlgear jacket.

My friends and I cleaned up on the awards. Karl and Aya won the fastest husband/wife team, as well as an age group award for Karl and 1st place overall female winner for Aya. Aya once again proved that she is a BEAST. Hernan came in 3rd overall. Ben won 1st place for his age group. I got 3rd place for my age group. This 10K is the longest distance that I’ve placed. Ben and I really enjoyed this race and had a great time (and not just because we got such cool awards). The Apple Chase really cares about giving a great race experience to its runners and it shows. It was well organized with fantastic and thoughtful volunteers. There weren’t many spectators on the course, so I appreciated all the cheering that I got from the volunteers.

Our next race is the Cherry Blossom 10-Miler. I’m excited to see how I would do because it’s a good test to see how prepared I am for my spring HM.

11 thoughts on “How Do You Like Them Apples? Apple Chase 5K/10K Race Report”