Finding the right travel accessory can be like Goldilock’s adventure. You want something not too big, not too small, but just right. I knew that there would be times during my trip to Costa Rica, where I would want to carry more things than I could carry in pockets (too small), but less than what I need for a purse or a backpack (too big).

It’s a Small Personal Item belt that carries holds various small items, such as keys, money, etc, while keeping your hands (and pant pockets free). I’m quite familiar with the Spibelt brand as I already own two original Spibelts that I use for running (one wore out, so I bought a replacement). Spibelt reached out to me to ask if I would review their Large Pocket Spibelt and I happily agreed.

Because of cold weather in NYC, I haven’t been running outside much. Thus I decided to use the Large Pocket Spibelt while traveling in Costa Rica.

The things that I love about the original Spibelt still hold true for the Large Pocket Spibelt. The belt is adjustable for a snug fit, which is important because it eliminates, or at the very least minimizes the jostling and bouncing of the pouch when filled.

The pouch/pocket is cleverly designed so that it can snugly fit small items and yet expand to fit in bigger items all without creating a lot of room for items to slide around. When my old Spibelt wore out, I tried to replace it with a running belt from another company. That running belt has big roomy pockets, which meant that with every step, everything was sliding, bouncing, and moving around. This was very distracting and I just couldn’t run another step. I quit that run quite early. I never used that particular running belt ever again. With Spibelt, everything is held tight and close to your stomach, so there’s very little bouncing while you run. 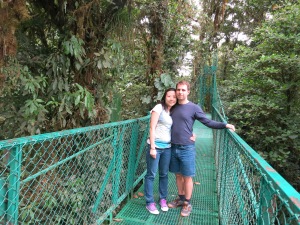 The Large Pocket Spibelt has bigger pockets, so it can fit more and larger items, and yet nothing moves. I used this Spibelt to carry my passport, my point-and-shoot camera, keys, money (bills and coins), and a credit card.

Our first day trip was to Selvatura Park to go ziplining and walk among the treetops in the cloud forests of Monte Verde. I really wanted to bring my camera along, but I knew I couldn’t have it in my hands or in my pockets while ziplining and I wouldn’t be allowed to bring a backpack. The Spibelt was perfect. It held everything I wanted to bring with me, but didn’t get in the way of anything. The Spibelt allowed me to have convenient access to its contents.

Another aspect of the Spibelt that I grew to appreciate even more was how small and discreet it was. Even when I stuffed my camera in there, if I tucked the belt underneath my shirt, no one could tell that I was carrying anything. Proof? See photo on left. My Spibelt is under my shirt and you can’t notice or tell. While Costa Rica is a very safe country and I never worried about getting mugged or pickpocketed while there, there definitely have been times in my travels in other countries where I did have such concerns. The Spibelt would definitely been very useful.

I also used the belt as a simple money belt to keep the colones (currency of Costa Rica) separate from my US currency, which Costa Rica also accepts. Because I chose the bright turquoise, it was really easy to spot it inside my cavernous purse.

The only real worry that I always have when I’m using Spibelt (regular pocket version) is that I might accidentally pull something else out along with what I’m taking out and not notice. I get around this by organizing how I place my items and by being vigilant when I do take something out. Spibelt carries a number of different kinds of belts and they have versions where there are two different pouches or there’s an inner pocket inside the main pouch. Those are other ways to get around this concern.

I don’t particularly recommend the Spibelt when you’re carrying a camera inside and you plan on galloping. Since this is probably not something you’re likely to do often (or even at all), this warning serves little purpose to most of you. But just in case! On our last full day in Costa Rica, we went horseback riding. The belt was great for whenever we walked or trotted. The belt probably would have been fine while galloping if my camera weren’t in it. But the combination of the fairly heavy weight of the camera and the gravitational force from the rolling motion of the gallop caused the belt to flop up and down. This was the ONLY time that I felt the belt bouncing. I tried tightening the belt to minimize the bounce, but the camera weight and the sheer force generated by the gallop caused the belt to loosen slightly again (or I wasn’t able to tighten effectively while riding a horse – hard to say which). Again, you’re probably not likely to experience this yourself, don’t worry about it. Also, no matter how fast you run, you’re not going to run as fast as a galloping horse, so you’re never going to generate this type of force yourself.

Yes, yes, and yes, I recommend the Spibelt for your own personal/travel/running needs. It works great in carrying personal items in an unobtrusive way. I am a longtime happy Spibelt owner. I frequently recommended it to my friends and to other runners, so I have no reservations about writing this positive review.

Disclosure: I was given a complimentary Large Pocket Spibelt to review and another to give away. The review reflects my own personal opinion.

If you’re interested in owning a Large Pocket Spibelt of your very own, you have an opportunity to enter my giveaway. The giveaway is open now until Wednesday, April 2nd. At the stroke of midnight when it turns into April 3rd, the giveaway will close. I will use Rafflecopter to randomly select a winner.

15 thoughts on “Review: Traveling with Spibelt”

Leave a Reply to Sarah @ How My World Runs Cancel reply