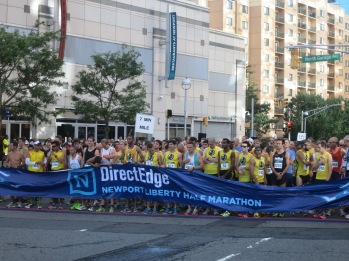 Name of the race: Direct Edge Newport Liberty Half Marathon

The Newport Liberty Half Marathon is a really fun local half marathon for me and Ben. Many of our friends run this race and neighbors spectate, which gives this half marathon a flavor of a moving block party — 13.1 mile long moving block party. Not to mention the start and finish line is merely a few blocks away from our apartment. For us, it’s a local race that is truly local. There’s something luxurious about having the convenience of sleeping in your own bed, then tumbling out of bed an hour before start time and knowing that you still have plenty of time to get to the start line. This year I decided not to race in the Newport Liberty HM because I planned on running the Wineglass HM in Corning, NY in a couple of weeks as my goal race. I didn’t want to risk racing Newport Liberty HM and not recovering in time for Wineglass. I know I could run the half and not race it, but I know me. If I’m in a race, then I’m going to race. Instead I decided I would do a long training run and have the fun of watching Ben and our friends race this.  We ran into our running group right before the start and I asked someone to snap this photo of us. 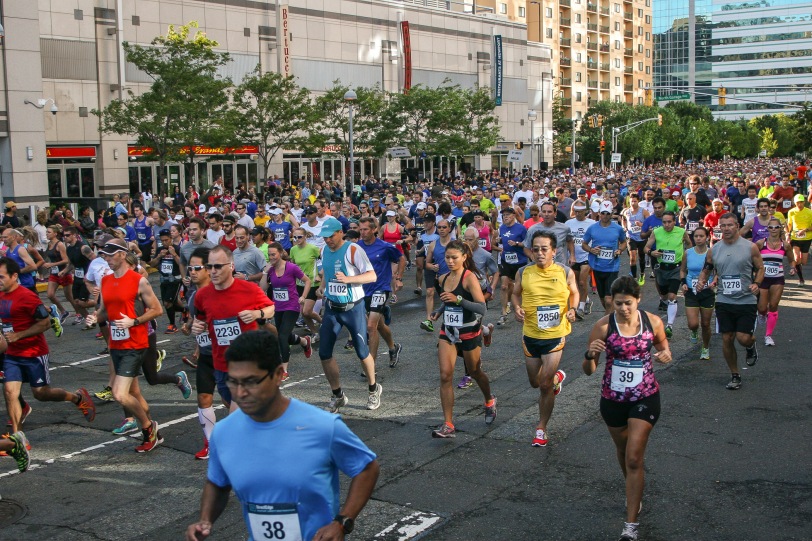 And they’re off! Taken by Mark Wyville

The mayor, Steve Fulop, of Jersey City spoke for a few minutes. He fired the start gun and then hopped into the field. It was thrilling watching a sea of runners storming me. After watching the field disappear into the horizon, I moved over to the other side of the street to watch the runners run past me again. One of the things I like about the Newport Liberty HM course is how it winds through Jersey City. The first two miles loop in a way so that toward the second mile marker the route goes past the start line. I saw the front-runners tear through the streets.

Another reason why I like to see the front-runners is because it means that Ben is not far behind. Sure enough a few minutes later, I saw him fly past me.

At this point I ran along the course to try to capture as much of the atmosphere and experience as I could as a spectator. The start line for the Newport Liberty Half Marathon is right by Newport Path Station. It loops back around to the Path station, which actually takes the runners a block away from our condo building, and then you run through residential streets. People are out watching and cheering on the runners. After the 4th mile marker, the course route enters Liberty State Park, which is quite frankly one of the best sections of the course. Many runners look forward to running in Liberty State Park because of the spectacular view of Lady Liberty from the course. You feel like you’re running toward her. Liberty State Park suffered from damages from Hurricane Sandy. We weren’t able to run in portions of the park for a while, so it was wonderful to see that they were able to repair the damaged bridge in time for the half.

View of Statue of Liberty at Liberty State Park

In addition, I like this portion of the course because I run in Liberty State Park frequently, both for races and for training runs. It’s my home turf. I know the paths, I know the turns, and I know what to expect. Another reason why I like this portion in Liberty State Park is because the route winds around in such a way that you can see other runners. As a runner, I like seeing where I’m about to go and I like seeing where I’ve been. Plus because the Newport Liberty HM is such a friendly race, runners are very supportive of each other. As the runners past each other, I hears cheers and clapping. The runners who were behind yelled, “Great job!” and those runners yelled back, “You too! Keep going!”

As usual a part of the course became cross-country because of the recent rains. Last year, just like this year, it rained the night before, which meant that a few small sections of the course were “flooded” (enough water on the path to make you want to avoid it), so runners ran on soggy grass instead. Small annoyances, but nothing really terrible in the grand scheme of things.

I ran into Nell, a member of my running group. She’s training for the Philadelphia Marathon and she was using the HM as a long training run. I decided to keep her company for a bit. We ran in companionable silence for a few miles except for when she greeted several people she knew. Like I said, Newport Liberty HM is very much a local neighborhood moving block party. Eventually Nell lost me because she’s faster than me and I couldn’t keep up. I continued along and snapped more photos.

View of lower Manhattan from the Newport Waterfront

After leaving Liberty State Park via tight turns right by the harbor, runners run through the city streets of Jersey City until they hit the waterfront. I saw a couple of funny signs. I wish I had taken photos of them. One said, “Did you poop yet?” and the other said, “Run quietly. I’m still hungover.” I smiled and laughed. I know runners are appreciative of spectators. Not only do spectators provide moral and psychological boost to the runners, but the cheers, applause, cowbell, and funny signs provide distractions to get runners to stop thinking about their pain that they’re suffering for a few moments. Believe me, anything that gets runners to think about something else, no matter how briefly, provides an important service. We, runners, love distraction. We’re in pain. Make us think of something else besides pain, especially if you can get us to laugh. Laughter is anesthesia.

The waterfront section of the course is another favorite of mine. Again, I run here often and this particular section I really consider it to be home territory because at this point I know I’m close to home. When runners reach the waterfront, there’s a little more than a mile left to the half marathon. At this point it’s all about bearing the fatigue and pain just a little bit longer. You’re tired, but there’s a gorgeous view of Manhattan to distract you from your current state of weariness. 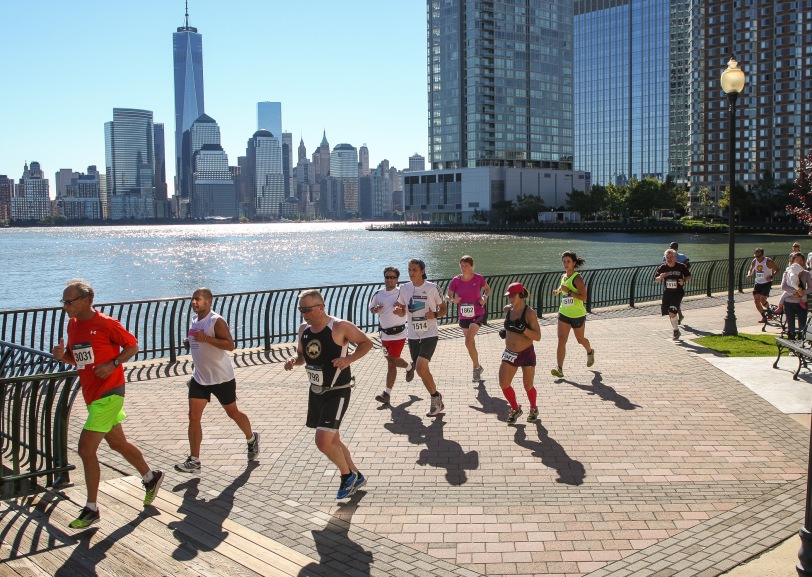 After running along the waterfront, the course takes you back to Newport, where the finish line is about a half mile away. At this point the roar of the crowds is palpable. The closer you get to the finish, the thicker the crowd is until there’s a tunnel of cheering people urging you on to go just a bit faster. I met up with everyone in my running club. We stood around and cheered for the other runners as we waited for the rest of our group to finish. When I saw one of our members go past, I joking yelled out, “Hurry up! I’m hungry!”

My friends and I had a great time at the Newport Liberty HM. Ben was hoping for a PR, but it didn’t quite happen. He still got a good time. Nell ran her second fastest HM time (about 30 seconds slower) even though she was treating this as a training run. A couple other people ran PRs. Someone we used to run with had an incredible day and he came in 10th overall. 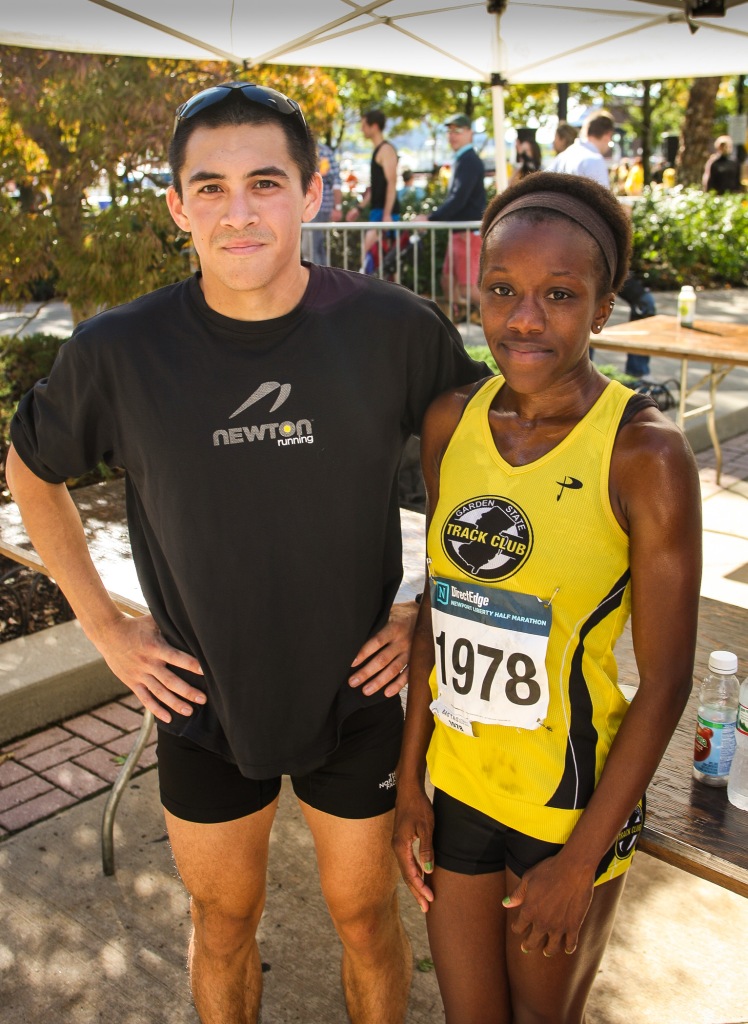 These two people above also had a pretty good day. Chris Croff of Summit, NJ and Cheyenne Ogletree of Garfield, NJ were the winners of the 20th annual Direct Edge Newport Liberty Half Marathon. They ran a speedy 1:08:59 and 1:20:45, respectively. They received a cash prize of $200 each for their wins in their division. I looked on Athlinks and I saw that Croff came in second last year and for the second year in a row Ogletree won the women’s open division.

It was a beautiful day. We had a great time. If anyone is looking a good fall half marathon in the NYC metro area, I definitely recommend this one.

Much thanks to the Direct Edge Newport Liberty Half Marathon for giving me some of the photos you see in this post to include in my write up.