Because the IAAF World Championships is happening in Moscow right now, I figure this is a good time to catch up on documenting my time in Russia, specifically my weekend in Moscow with Ben. I’m writing what I feel like writing, so while the events within a post will be in chronological order, among posts the events won’t be.

Ben came to Russia to visit me for a week. My mom had left and I had a couple days to myself. I missed Ben very much, so I was really happy to meet him at the airport. Also after a couple weeks of living in a slightly moldy and dusty Soviet apartment, I was eager looking forward to staying in a Western-style hotel in Moscow. The nice upscale hotels in Moscow advertise as being Western-style, which accommodations that Americans are used to (American style shower and bathtub and a bidet), English-speaking staff, and non-smoking rooms. Our room was really clean, large, and quite comfortable. The mattress was a bit old and soft, but after two weeks of sleeping on a very old and lumpy mattress, this was bliss in comparison. We made use of their sauna that was free to guests until 4 pm. 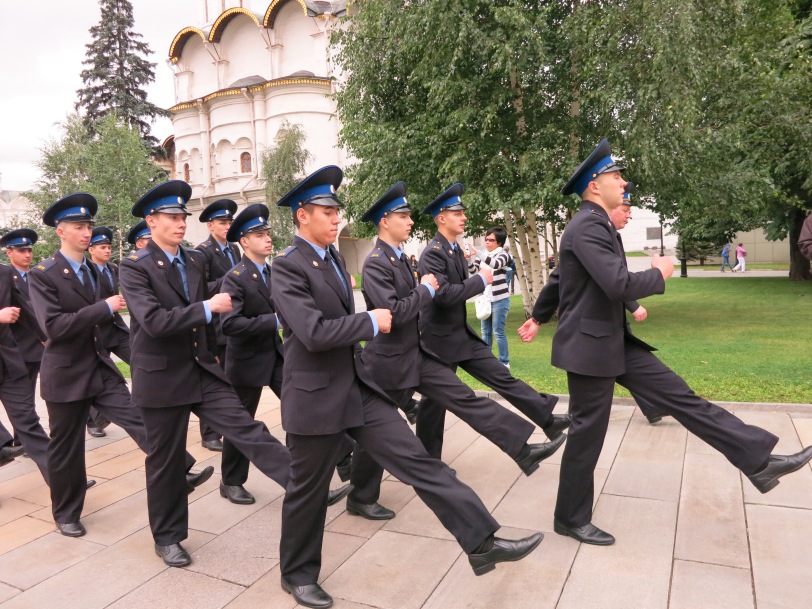 Naturally we had to go to the Kremlin, which was the heart and symbol of the Cold War. Although it’s open for visitors, it’s still quite restricted. There are huge areas that we were not allowed to see or go by. Guards were stationed everywhere and monitored where we walked. We were only allowed to cross at certain areas and if you dared to venture off the striped crosswalk, oh . . . the shrill whistle will blow and the guard will scold. Visitors quickly learned to scuttle back to the authorized areas.

We wandered around and marveled at how obediently everyone followed the rules under the sharp eyes of the guards. It’s a bit strange to see vast areas of emptiness where no one was and certain areas teeming with tourists, but no one daring to cross the invisible barrier. 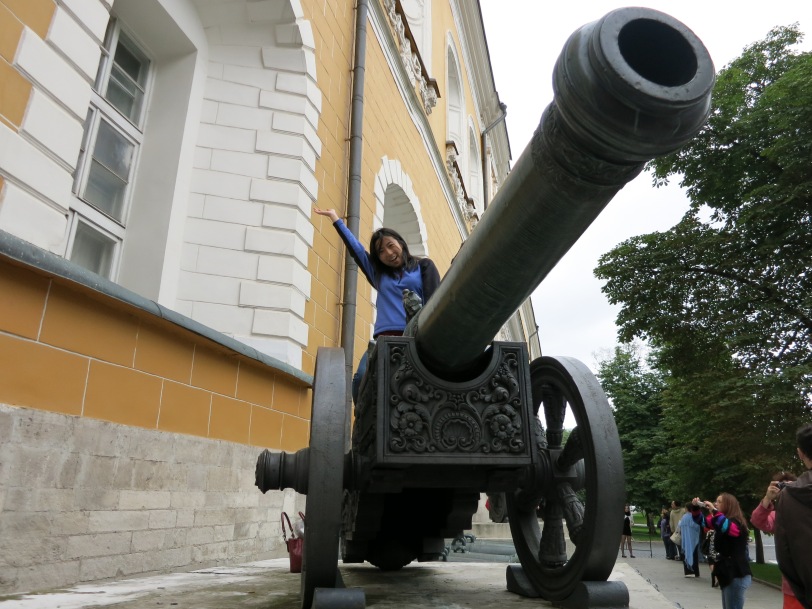 After the Kremlin, the Red Square was next. Everyone wanted to know if we saw Lenin, but we didn’t go inside his tomb. Frankly I think the thought of seeing preserved wax body is morbid.

We did, however, go inside St. Basil’s Cathedral. We loved the lovely colorful onion domes and the interior was quite interesting. Each room has different altars and/or religious displays from various churches, cathedrals, and monasteries.

Saturday night we thought about going out for drinks, but it started to rain. Our hotel room had an amazing view of the city and we realized that we would rather relax and stay in. So Ben went out and bought a bottle of red wine and a couple chocolate bars. There’s nothing like snuggling, drinking wine, and eating chocolate on a cold rainy night.

Sunday we spent an easy day walking around up and down Arbat Street, a pedestrian only walkway. Yes, it’s crowded and full of kitschy tourist stores, but it’s a part of the historical center of Moscow. We also meandered to other little side streets and got some food to eat at a little cafeteria-style restaurant that was recommended in an expat magazine.

On Arbat St, I bought two sets of matryoska dolls (stacking babuska dolls) from this old friendly old man. He’s quite jolly like Santa Claus and he handpaints his dolls. I wanted to buy some as a souvenir. Certainly matryoska dolls are plentiful all over Russia, but I wanted something a little special, not a mass-produced tourist tsotchke.This was perfect. Each doll was lovingly painted by him and now whenever I look at the dolls, I remember interacting with him and being charmed by his ebullient personality.

We had dinner with one of Ben’s old classmates from his MBA program. It was lovely meeting her and hearing stories of Ben from way back when. Based on the stories, he hasn’t changed one bit.

We had an early flight Monday morning back to St. Petersburg. A small problem was that the subway wouldn’t be open until 5:30 and the first trains came in a little after that, which meant that making it to the airport was going to be quite tight. We missed the 7:00 Aeroexpress train to the airport, so we had to wait for the 7:30. We arrived at the airport at 8:17 am and we had less than 30 mins until our flight took off. Anxiously we ran to the check in counter. The lady at the check in counter took our passports and looked up our info.

“Did you know that you needed to have checked in 15 minutes ago?” she asked through pursed lips.

She looked at us coolly, but we could hear, much to our relief, the screeching noise of our boarding passes being printed. She handed them over to us and said succinctly, “You have 7 minutes.”

We gratefully nodded and flew to our gate. Luckily going through security is fast in Russia. We were at our gate in 5 minutes. We were one of the last few passengers getting into the plane. A few minutes later, we were flying to St. Petersburg.

On one of our nights in St. Petersburg we got to see an opera, Don Quixote, at the famed Mariinsky Theater. Seeing Don Quioxote was quite a cultural experience. The supertitling was in Russian, so we had no translations and depended only on the emotional expressiveness of the opera singers and our knowledge of the story of the man from La Mancha. I know French, so occasionally I could understand what was being sung, but it was still difficult. This was my second time in this theater (I saw a ballet with my mother) and I noticed that Russians have no qualms about taking photos in the middle of the show. Another thing that we found a bit baffling was how very few people bothered to turn off their cell phones. We counted up to eight rings going off (we stopped bothering to count after a while). Two of those rings came from a Russian woman who was sharing the box seats with us. She was really shameless. In the US, this behavior from the audience wouldn’t be tolerated.

I didn’t take a photo during the performance, but I did take one when they were taking their bows. Out of all the operas I’ve seen, Don Quixote was my least favorite. I thought it was slow, but I’m not sure if it’s because it really is slow, or the lack of English supertitles made it seem slow. While I did like the singers cast for Dulcinea and Sancho Panza, I didn’t care for the lead opera singer for Don Quixote. His voice was not my cup of tea.

The sets for the opera was terrific. As a bibliophile I loved the gigantic book. Ben was impressed with how they used lighting and screens to emulate how Don Quixote would have perceived them as giants and fought them off. All in all, it was an enjoyable evening and I definitely recommend seeing some sort of theatrical performance at the Mariinsky Theater.

3 thoughts on “Moscow Weekend & Don Quixote at the Mariinsky Theater”