Last week a friend invited Ben and I to go visit Storm King Art Center with her and her husband. Storm King is a magnificent sculpture art garden that is absolutely huge. A little more than an hour north of Manhattan, it offers a pastoral escape from the city while offering art of immense scale. I had heard of Storm King, but forgot about it. I was excited to go up there with her because we hadn’t seen each other in a while.

We drove up in my car on Saturday. It was a warm day, but not too warm. Storm King has several open fields and very little shade in those fields. As such on overly warm days, they’ll close to prevent people from overheating. Storm King is so large that although we were there for four hours, we didn’t see everything. Not even close. While we were traipsing through the fields, I could see how it would be easy to suffer from heat exhaustion. The sun relentlessly bears down on you and it’s possible to walk for a long time without seeing anything shady. We did see that they offered little paper fans. My friend and I each took one (but we didn’t end up using them). My friend’s husband groaned, “Oh, great. Two White guys and their Asian partners with paper fans.”

We didn’t have a plan for how we would see Storm King. We looked to see what talks and exhibits they had. They had a lecture on bees at noon and 1 pm. We decided to walk around a bit, get a bite to eat, and then go the bee lecture at 1 pm. 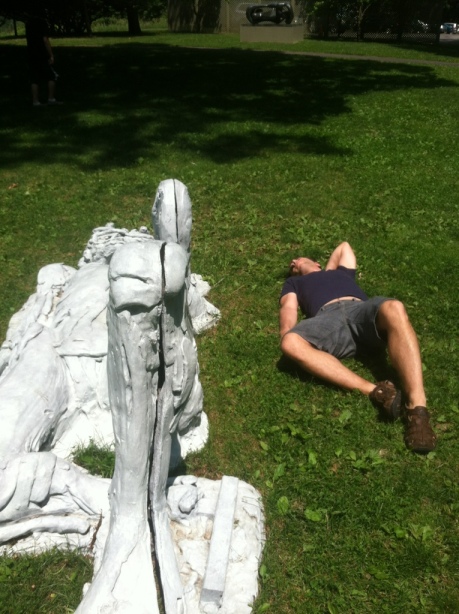 Our first area of exploration was Museum Hill, where there were lots of smaller sculptures scattered around. I made  Ben pose for this one on the left. Then we got a bite to eat and headed towards Maya Lin’s Wavefield, where the bee lecture took place.

Also at Storm King we saw lots of cicadas. I was hoping to get through Brood II without seeing a single one, but alas I was not so fortunate. Cicadas are really as big, slow, and ugly as I had read and seen in newspapers. We saw one at the foot of a statue. Then we saw another one a few feet away. All of a sudden we looked up in the air and we saw tons of them flying around like really fat bees or small birds.

*shudder* They’re so gross. Ben and my friend’s husband were fascinated and were absolutely delighted that we got this chance to see them up close. We had to be careful as we were walking around because the cicadas flew into us and there were tons of dead cicada bodies on the ground. Dessicated shells littered the grass. Considering how many cicadas we saw, I hate to think how much worse it would have been a couple weeks ago when it was the height of cicada season. Cicadas will be around for another week, so if you really want to see them, you know where to go. 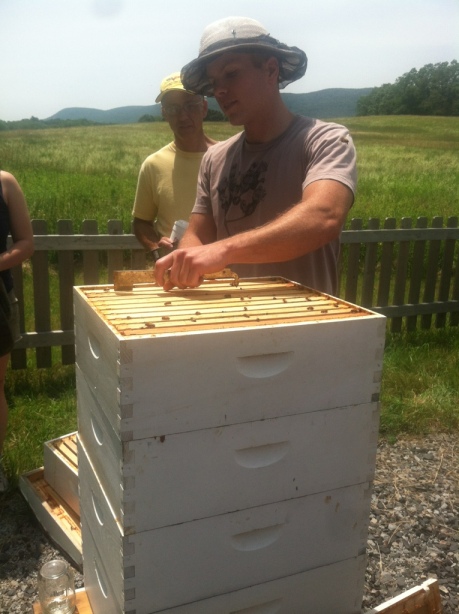 We were at the the north end of Storm King as we started walking. The bee hive was located at the southern end of Storm King. We had a long walk ahead of us that we needed to do in 15 minutes. It seemed unlikely that we would make it when out of nowhere, a staff member driving a golf cart yelled out if we were headed to the bee talk. We answered affirmatively and he told us to hop in and he would take us there. It was so nice cruising along in the golf cart. We arrived at the bee hive right at 1, just in time for the talk.

The beekeeper gave an interesting and informative talk about bees and honey. He was clearly passionate about bees. He talked about the art of beekeeping. He knew a lot and we were all enraptured. We watched him handle his bees. The best part was when we tasted honey straight from the honeycomb in the hive. It was so sweet and the honey that was made was from the flowering fields. He told us that we were tasting the surrounding fields. 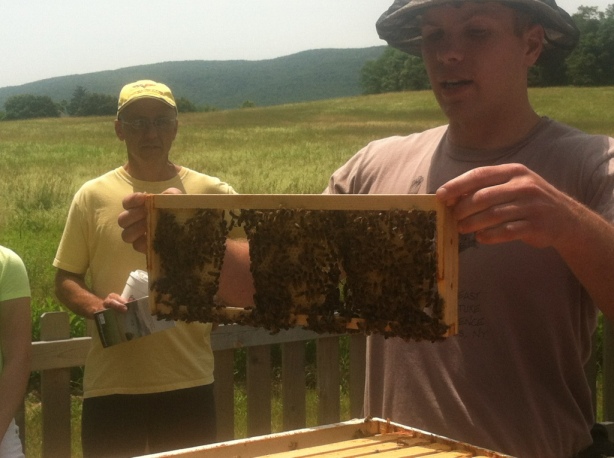 After the bee talk, we took a tram to go see the three-legged Buddha, which was my favorite sculpture at Storm King. 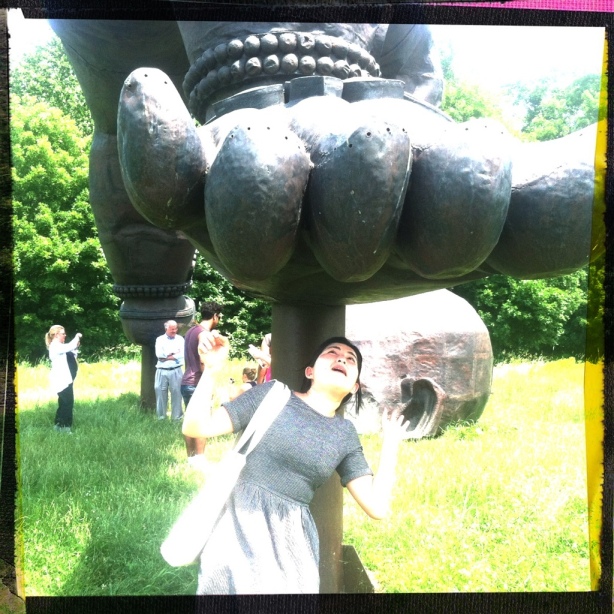 We wandered around for about another hour before heading home. 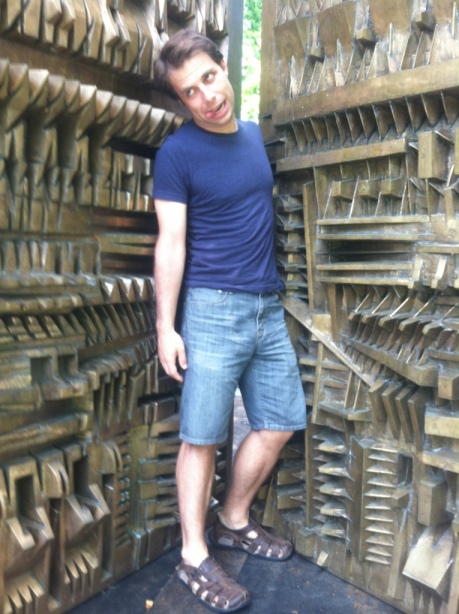 We had a fantastic day at Storm King. We definitely want to go back to see the other sculptures. Sadly we belatedly realized that we should have brought a picnic lunch with us. Storm King is beautifully kept, so the grass is thick, lush, and really soft and comfortable. Because the grounds are so large, one could easily bring adult beverages to discreetly enjoy.

I highly recommend visiting Storm King if you’re an art lover and looking for a day trip out of the city. There are a couple different options to getting to Storm King via public transit.