Ben started his marathon training for Steamtown in October. Ben’s least favorite work out is the long slow run. He finds it insufferable to run slowly for such long periods of time, not to mention you have the problem of what to do about water. I offered to accompany him on my bike so I could keep him company and carry all the water that he needs. We took off for his long run early in the morning while there was a break in the weather.

Ben ran two loops from Hoboken to Weehawken, along the waterfront. I followed behind on my bike. I did my best to entertain him, but I didn’t know what to say or do. So every once in a while I commented on what I saw or said encouraging things to Ben. I wore my Camelback because it has convenient side pockets. We discovered the easiest way for Ben to get water from me, was to leave the side pocket open with a bottle sticking out. When he needed water I biked at his running speed and he grabbed the water. When he was done, he quickly shoved it back into the pocket. 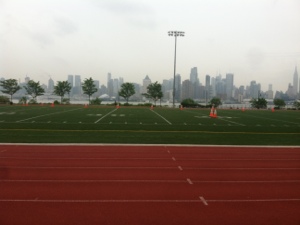 We ran to Weehawken last summer, but this time we went farther than I had gone before. We went all the way to the Weehawken Waterfront Park and Recreational Center. It’s really nice with a wonderful view of Manhattan. Not to mention, it also has a beautiful new 400-meter track. There was a beautifully manicured soccer field in the center. There were a few people there walking along on the track, but it was quite empty for the most park, unlike the track at Astoria Park, which usually has several runners.

Ben ended up running 13.1 miles (he was determined to do a half marathon length). The wind started picking up. It drizzled a bit while we were out, but it was fine. I didn’t find accompanying Ben on his long run at all boring. It’s a nice easy work out for me. There were enough roadblocks and curves in the path to keep me from zoning out while cycling.

I was really tired about Ben’s long run. I took a three hour nap in the afternoon. In the evening because of the rain, we couldn’t join our running group to do a group run. I went to the gym to do speed work on a treadmill.

I had worn this Oiselle Live, Fly, Run shirt all day and it must have given me superpowers! I warmed up with my usual half mile at 6 mph before cranking up to 8 mph. I originally planned to run 2.5 miles at this pace (equivalent to 7:30 pace). The warm up felt way too easy. My legs were nice and loose. I was really happy when I starting running fast. The first mile also felt really easy. During the second mile where normally I start to feel like I was suffering, instead it still continued to feel easy. I started to think that I should go longer. At the start of the second mile, I developed a tiny little side stitch, but it wasn’t anything that I couldn’t handle. At 2.5 where I originally planned to quit, I was feeling too good and decided to continue on. My feet flew for another half mile and then before I knew it, I slammed my speed work.

When I was done, I felt so invincible. I don’t know what’s in these threads, but I’m a believer.