Emerald Necklace: A Jewel of a Running Route

Last week I was in Boston with my mother and youngest sister to see the newest member of our family. My other sister, the middle one, gave birth to a beautiful little boy. Although much of our time was spent with the baby, we did do a little sightseeing in Boston and I managed to do a couple runs.

Boston certainly is a magnificent city to run in. Not only because it is the host to the Boston Marathon, but because of all the great running paths that crisscross and decorate the city and surrounding towns like a winding ribbon. I chose to run Emerald Necklace because of its convenience to my sister’s place in Brookline. Now after having experienced it, I would absolutely recommend this route for running and walking.

Emerald Necklace is a series of parks connected together by a chain of waterways and parkways, hence it’s name. Looking at a map, the green areas of the parks look like emeralds hanging of a “chain” of water and paths. Altogether, it’s about 1,100 acres. You can read about its history here.

I went for a 5-mile run starting at the second most north-end of the park. I ran a lot of little loops because I was uncertain of the path and I didn’t want to get lost. At the end of my run when I looked at how far south I went, I realized that if I had ran straight south, I could have ran around Jamaica Pond and back up for about the same distance. Next time.

After experiencing a number of days of pouring rain, I relished the break in the weather to go out and freely run in the park. I didn’t worry about distance or the pace. I just wanted to run for the sheer fun of running and savoring the feeling of moving my legs. I needed a break from regimented routine, schedules, and deadlines. This run was for me. I listened to my music and the falling thuds of my feet. Once in a while I encountered another runner, walker, or cyclist, but for the most part I was alone. There was just enough foot traffic to make me feel secure and that the park wasn’t deserted, but not so much that I couldn’t revel in the solitude.

The paths of Emerald Necklace are paved.  I ran in the late afternoon and there was plenty of shade from the trees and the occasional footbridge that I would go under. I appreciated the views of the little ponds and waterways that I ran by. I don’t know why, but next to running over bridges, I love running next to water the most.

Although the direction of the pathway is clear for the most part, the reason why I got a bit uncertain is because when you cross a major throughway, where you’re supposed to pick up the next path segment is not always immediately self-evident and sometimes there was an opportunity to do a little “trail running.” Given a choice between running on pavement and running on a trail, I’ll choose trail every time. So whenever I saw the paved path going one way and a dirt trail going another, I ran on the road well-traveled judging by the glabrous worn path with nary a blade of grass. The park is quite flat with a few very small “rolling hills.” With its quiet nature and scenic views, I highly recommend running Emerald Necklace if you’re ever in the Boston Area. There are several T-stops that are near Emerald Necklace, so it’s very accessible by public transit. 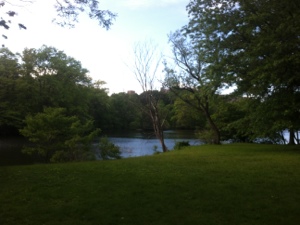