By afastpacedlife May 6, 2013 art dessert half marathon training tempo run 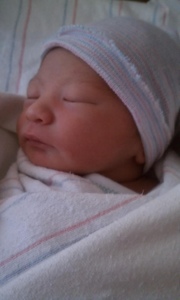 A very exciting new addition to our family arrived this weekend. My sister delivered her first child (and the first grandchild on both sides of the family), Luke! He’s healthy and everything looks to be A-Okay! Welcome to the world, Luke! I can’t wait to meet him in person in a few weeks.

On Saturday I went for a 4-mile tempo run with Ben along the Hoboken waterfront. I’m really pleased with how well it went.

At the end of the tempo run, I was tired, but not wasted. It’s amazing how far I’ve come in less than a year. Ben and I remarked about the incredible difference between this 4 mile tempo run and the one we did last year were I ran at an 8:30 pace. Last year, I was completely and utterly drained at the end of the run and felt I had nothing left to give. For this tempo run, not only did I run much faster, but I felt like I still had more “gas” left in me. I could have gone on a bit longer. 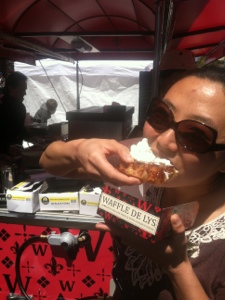 On Sunday Ben and I went to the Hoboben Arts & Music Festival. I will admit that I’m a bit of a snob and went to it without much expectations. The festival turned out to be a lot more fun and interesting than I thought it would be and actually enjoyed myself. I don’t like the various street fairs that New York City has to celebrate the different holidays because no matter what the holiday is or which ethnic/cultural group it is celebrating, all of these fairs are exactly the same with with the same boring vendors – discount make up, watered down lemonade, mozzarepas, zeppoles, and the like. Okay, so the Hoboken one had a few of those too, but far fewer, but more importantly, they had original artists and crafters selling their work. It very much reminded me of all the art fairs that I used to go to when I lived in Toronto. Ben and I found a couple different artists whose stuff we really liked. We didn’t buy anything just yet because we’re moving soon, so we made a note to visit them again when in the fall when the festival is back. We did, however, buy a bottle of organic chili and garlic infused olive oil from Cara Bella Imports, a small artisanal and local business. The olives come from the family’s own olive grove orchard in Italy. There was a beautiful luxurious taste to their olive oil, that was made more evident when we did a taste comparison with the other olive oils at the fair. We got a bottle for a bargain price of $10 because they were doing a promotion.

The best find of the afternoon was Waffle de Lys, a stand that sold Liege waffles. These waffles from Belgium aren’t the big fluffy Belgian waffles that Americans are used to. No, instead these waffles are more dense (but not tough), but infused with big flavor from the crystalized sugar lumps that are studded throughout the waffle. Liege waffles are my favorite and I was thrilled to the moon to find these. We got ours with vanilla ice cream and it was an incredibly wonderful treat. Never mind we ate the waffle before lunch. When dessert is this good, you don’t wait.