Crowds of people jostled around to strain for a better view of the glorious raffia-bedecked horse costumes. Little children had the prime seats in Grand Central. Their tiny bodies were neatly lined up along the border. The smallest ones sat down. Some were hoisted onto the shoulders of their parents. The mood was jovial. We were eagerly anticipating the 2 o’clock “Crossing” performance by the student dancers from the Ailey school.

I found out Nick Cave Heard NY through NY Cliche. I love art performances and New York City is a wonderful place for these kinds of cultural delights.

Heard NY is Nick Cave’s first site specific performance in New York City. He’s a Chicago-based performance artist who’s best known for this Soundsuits, costumes that make noise as they move. These raffia-covered horse costumes rustle as the dancers dance, prance, skip, run, and move to the sound of the harp and drums.

I love the personality that the dancers infused into the horses. The one closest to me was quite impatient. While waiting to start, he pawed his hoof and nudged one of the staff as if to say, “Come on! Let’s get this going.” Once the horses were allowed to move, they went about their own business. Some were curious and interacted with the children. Small hands quickly shot out to pet the horses. Other horses were busy racing each other to establish dominance. Some were lazy and barely strolling. 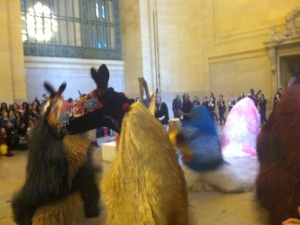 Then as the beats of the music grew louder and more frenzied, the horses began trotting around the edges of the space. The trotting became dancing. Wild, undulating movements that suddenly caused the horses to separate back into two separate dancers. Now instead of several single horses, there were the front half of the horse and wild gyrating muppet creatures. This was dancing!

I was completely absorbed in the experience of watching the muppets whirl like dervishes. The audience gasped and were further entranced by the hypnotic movements that seduced us away from our every day life.

And then they came back together as one horse. Back again to doing horse-like activities, like gazing, prancing, and curiously looking at us on-lookers. Finally the dancers freed themselves from the costumes and it was over. 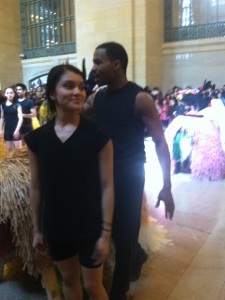 Nick Cave’s “Heard NY” can be seen twice daily (11 am and 2 pm) at Vanderbilt Hall in Grand Central until March 31st. I highly recommend that you go see it if you have the chance. The performance lasts for about 15-20 minutes. Show up about a half hour before in order to find a spot with a decent view of the show.

More articles and a clip of the performance here: