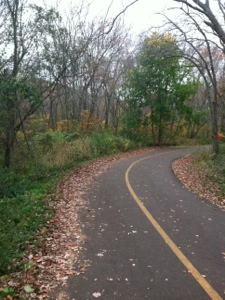 Yesterday I had made up my mind to not race today. I was still tired from Paine to Pain and a long work week, I had work that I need to take care of, weather forecast said it was going to rain, the approaching Hurricane Sandy probably went that it was going to be really windy as well, etc, etc, etc. I had a litany of reasons for why racing the Sleepy Hollow 5K in Massapequa was not a good idea.

But I woke up early this morning. It wasn’t raining. It wasn’t going to rain until the afternoon according to the forecast. My body was awake and really eager to race. I didn’t bother trying to talk myself out of it. I wanted to race. I may not love running, but I looooooovvvvvvveeeee racing. I’m a competitive person. In high school and college, at one point or another I competed in equestrian, drama, and speech and debate. Once I left college, I sorely missed competing. I love coming out on top. Even when I don’t do well, I love watching other (better) competitors to see how I could do better next. I have a strong competitive streak and I thrive in intense situations.

I rediscovered my love of competition that had lain fallow for so long. This weekend there was a plethora of races that I could have chosen, but I was drawn to Sleepy Hollow 5K because it was going to be in Massapequa Preserve. The race promised to be picturesque by going through trails decorated with fall colors and snaking by lakes.

I arrived to the race in the nick of time. I left home a little too late. By the time I found parking and got myself registered, I had to hustle to get to the start line. I ran to the start line and used that as my warm up. In my hurry, I forgot to take off my fleece jacket, so I had it with me. I knew I was going to get too warm with it, so I wrapped it around my waist. I set up my RunKeeper, took a couple deep breaths, and then we were off!

I told myself to run a conservative first mile. It’s really hard to gauge by feel and my IPhone was muffled, so I couldn’t hear the auditory feedback. My fleece jacket fell off suddenly at one point, and I lost a couple seconds to go back for it. I decided to bunch it up, tuck it under my arm, and run with it. Less than ideal running form, but what can you do? At the first mile marker, a person was there yelling out times. I heard 7:30 when I went by. That was much too fast and I felt a bit confused because I thought I was running more slowly. At the second mile marker, someone yelled out, “15:30.” I knew I was running the second mile more slowly, but I thought I was on pace to still do a sub-25.

I didn’t notice too much of the scenery, but I did like what I did see. A portion of the course was on hard-packed dirt, which is quite nice to run on. It’s softer than concrete, but still firm enough to let you run as fast as you wish. There were quite a few very gentle curves, which I like because it’s more interesting than going straight. A few very very very gentle short inclines, again, a little bit of change to keep the course from being monotonous. I was running hard and breathing harder. I concentrating on taking deep breaths. Because I was in the second row of the start line, I got passed by several runners who are much faster than me.  But I did get the opportunity to pass a couple people and I had to work at passing them. Around halfway through the race , a guy passed me. A few minutes later, I passed him keeping my steady pace. He didn’t like that because he immediately sped up to pass me again. A few minutes later, I passed him again because he was lagging. He surged once more. A short while later, I passed him and then I slightly increased my pace so I could drop him. The other opportunity happened toward the end of the race. A woman passed me, but I tailed her for a bit. I knew we were getting close to the end (less than a mile to go) and I told myself to go as fast as I was able. I picked up my pace and passed the woman. She really didn’t like that because she sprinted ahead of me. I could tell that she was tired and I had more energy left than her because as soon as she passed me, she slowed down. Seeing that weakness gave me a psychological boost. I increased my pace again and willed myself to withstand the pain. I passed her. She passed me. I told myself that I was stronger and I would wear her down.

At the last bend I recognized the path that we were on. It was the little section that I ran on from the registration site to the start line. The finish line was at the registration site. I knew it was a matter of moments until the end, so I put in one last surge to finish strong. I passed the lady once again who had been trying to hold me off. I couldn’t tell if she tried pass me again, but she didn’t have a kick (or didn’t bother trying), so I passed her.

I didn’t have my best race, but I still ran a solid pace. I ended getting 2nd place for my age group (35-39). I looked at the results and even if I had ran a PR, there was no way I was going to get first for my AG. That runner runs *much* faster than me.

I forgot to turn off my RunKeeper until after the award ceremony (oops), but it could give my mile splits (except for the last .1).

The first two mile times are really different from what I heard on the race course. I’m more inclined to believe these mile splits because the only way for me to run a 25:33 5K after running a 7:30 and 8:00 pace for the first two miles, respectively is if I completely fell apart on the last mile. I definitely did not fall apart.

I really enjoyed myself at the Sleepy Hollow 5K. They’ve been hosting this event for 12 years and the experience shows. It was very well run. The course was clearly marked. At the one street crossing we had, the police held the traffic back for us. The local Boy Scouts ran the water stop that was halfway through the race. There were spectators on the trail cheering us on. I was touched by how the organizers appreciated the older racers who had been coming out year after year to support the Sleepy Hollow 5K, which is a fundraiser for the Hagedorn Little Village School. They called the winners of the AG awards starting with the oldest. I thought this was great because usually the AG awards start with the youngest first and by the time the oldest AG group is announced the crowd is restless and many have already dissipated.