Map of Paine to Pain Route

Ready to Run with Headsweats

No pain, no glory! Last Sunday, Oct 14th, Ben and I participated in the 5th Annual Paine to Pain Trail Half Marathon in New Rochelle, NY (just outside of New York City). The name of this trail half marathon is utterly apropos.

The race starts at the Thomas Paine Cottage Museum and you meander through various other little towns and municipalities on a trail through local parks until you hit New Rochelle High School, where the half marathon ends with the last .1 mile or so on the high school track (more detailed description here). You had read about the history of the trail and the race on their blog here. It’s amazing how it’s grown from 50 runners to over 700 in five years, primarily through word-of-mouth.

Ben and I decided to spend the night at my cousin’s place in Chappaqua. Because we were both tired from our hard 5K on Saturday, we went to bed at 8:30. There are very few things in life that make Ben happier than going to bed by 9 pm. Going to bed by 8:30 is one of those few things. I had a faux complaint about going to bed so early on a Saturday night and he responded with, “But honey, I’m a party animal.”

We elected to park at the New Rochelle High School parking lot where the finish line was. It’s a short 10 min walk to the start line, but we knew that 10 min would feel interminable when exhausted from running. The start had a wonderful atmosphere. Everything was very well-organized. Lots of port-o-potties, so wait time was short. Ben quickly got our race packets. There was a huge truck that collected our bag, which would be waiting for us at the finish line. REI had a table set up with lots of different kinds of fuel available for the runners. I already had my Shot Bloks, but I took a gel, just in case (and it turned out to be a good thing). 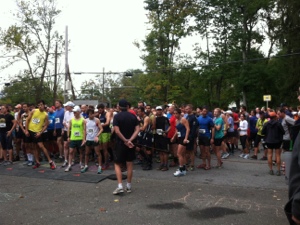 Because Ben is a speed monster, he was in the first wave, which started at 9 am. I, however, was not starting until 9:15, the 4th wave. I love the fact that they start each wave with someone wearing a Revolutionary War costume firing a rifle. This touch added to the festival atmosphere and character.

The first mile is a bit tough because you start with a nice hill. I took it nice and slow because my legs were feeling heavy and tired from the 5K the day before. It was a noisy and jovial start because elementary school and middle school cheerleaders were cheering for us. People from the neighborhood were out and watching, yelling, and clapping.

The course was very well-marked. I was never lost nor was I ever in doubt about where I needed to go next. Also I found the mile markers pretty funny because it would say things like Mile 4ish. I had my RunKeeper set up to tell me my pace every 1/2 mile, so I always had a good idea of how far I went and how much farther I needed to go. We got lucky with the weather because it had been dry leading up to the race. It rained the night before, but not too hard, so the trails were still in very good condition. The weather was in the mid-50s, perfect running weather for the fall. I ended up feeling a little cold at times because I couldn’t run as fast, but overall, I was okay.

The first part of the trail run is Leatherstocking Trail, which is a pretty technical trail. I saw three girls go down in the first three miles. I was the fourth girl to go down at about Mile 4.6. I feel rather foolish about this because it was a fluke accident. The trail at that part was flat and I wasn’t going too fast (between 9:30 and 10:00 min pace). I was moving at a steady clip. It just so happened that my foot went on a rock that was covered by leaves and I slipped. I went down hard. It really stung and I saw that I had scraped my right wrist and elbow pretty badly. It’s been a couple days now and my right wrist is still slightly swollen and sore. I had a bottle of water with me, so I washed myself off. I was pretty shaken by the fall for a couple of minutes, so I walked until the stinging sensation lessened. Then I slowly began running again. I knew there would be an aid station at Mile 7. I figured if I felt really miserable I could ask for a ride back to the finish line. But by the time I made it to the aid station, I was all right again. I wanted to get cleaned up because quite frankly I looked like a mess. My wounds were bleeding a bit and I knew once I got bandaged up, they would be fine. The aid station was really great. They cleaned me up and while I drank some water, a volunteer filled my water bottle for me.

Watered, cleaned, and bandaged, I trundled off back into the woods to finish my run. I wish I had taken photos of the course. It was fantastic. I love the fall colors. I love crossing little wooden foot bridges. I love running under the soaring bridges that carried cars. I love running through the tunnel under the Hutchinson River Parkway. It kinda looked like a giant sewer tunnel (only without the sewer). Aside from the fall, I had a great time. I thought there were a lot of spectators for a trail run. Although aid stations were at Mile 4, 7, and 11, volunteers could be found at various other locations, especially when there were street crossings or when the trail intersected with other trails. There were even volunteers on long stretches where you couldn’t possibly get lost, but they were there to cheer you on or offer help if you needed it. P2P definitely deserves the accolades it receives as being one of the best trail races in the country.

The course is somewhat technical (not nearly as technical as Danby Down & Dirty). Some of the hills are pretty steep, so I just walked those. A lot of people went down. I realize what I love about trail races, aside from running in nature, is the close intimate feel and comraderie among the runners. When you pass someone, you’re likely to get a “Good job” from the person you just passed. If they’re passing you, they’ll often say, “Keep going. You’re doing great.” It’s a wonderful encouraging atmosphere. If a runner looks as if he or she is in trouble, someone immediately stops and offers help. Water is generously shared. Trail runs are hard and we rely on each other for help if something goes wrong because no one else might be around for miles. Toward the end at Mile 11.5, I noticed a guy limping. I ran up next to him and asked if he was all right. He answered that he was cramping up. I offered him water and fuel, for which he was really grateful. I gave him some of my water from my water bottle and the extra gel that I picked up that morning. I felt good about being able to help someone.

For the second half of race, I was able to steadily gain and pass several runners because I ran so conservatively in the first half. It was pretty fun because this is something I rarely do. Usually I start too hard and people pass me. I particularly enjoyed chicking the guys. The end of the race was once again a party atmosphere. I could hear the cheers from cheerleaders before I see him. I went around a bend and I knew I was close to finish. The finish line was on the track and Ben was waiting for me. He tried to run the last bit with me, but he was so stiff from waiting so long for me that he gave up. Finally, 2 hours 35 mins and 44 seconds after I started, I was done!

I got a really cool finisher medal. Out of all the racing medals I’ve gotten, I love this one the best because it actually reflects something about the race itself. The art designer who designed this medal did a great job. There are three men in Revolutionary War outfits running and the lead runner appears to burst out of the medal itself. It’s fairly large and has a nice heft and feel to it.

There were tons of great food to eat. We ate our fill of pasta salad and sandwiches. I gorged on the cookies that were there. I don’t know which bakery gave those cookies, but they were soooo good. Several different kinds (oatmeal raisin, chocolate chip, cookie sandwiches, jam-filled sandies, brownies, etc) were lying around on plates for a few brief minutes before being snatched up by eager hands. The ubiquitous post-race snacks of apples, bananas, and bagels were also available. Ben took some Kind bars and coconut water. The organizers even arranged it so that if you wanted to take a shower at the high school (because let’s face it, trail running is a dirty business), you could. You could also get a massage (actually you could have gotten one before the race too) to stretch out.

Both Ben and I thought Paine to Pain was really well done (we’re not the only ones who feel this way, you can read more reviews here). He loved everything about the race, except for the race itself. *laughs* Poor guy, trail running is really not for him. He gave it a good go by doing the Danby Down & Dirty (10K) and this half marathon with me, but it’s not for him. He wants to go fast and all he wants is a straight, flat, and fast road course. His time was about 1:50, which is much slower than his usual half marathon time. I think he has a new-found respect for trail runners now. As for me, I realized just how *hard* trail runs are. I love running in the woods and thought it was great conditioning run for me. I’m much too clumsy to be competitive, but I love being a part of the trail running community. I don’t want to do Paine to Pain every year, but I do know that I do want to do this again. Ben enjoyed himself enough that he would be willing to do this again with me, but to take it easier and run with me. He likes being my race sherpa. And I must admit, I enjoy having a race sherpa who brings me water and carries stuff for me.

6 thoughts on “Paine to Pain Trail Half Marathon Race Report”