Last weekend I attended the World Maker Faire, which is a faire/festival celebrating inventors, engineers, tinkerers, crafters, DIYers, and anyone else interested in creating things. It was held Oct 29th – 30th at the New York Hall of Science in Queens. It’s only a few blocks away from the 111th St. stop on the 7 train.

It’s quite a spectacle because all sorts of off-beat projects are placed on display. I saw various innovative motorized vehicles, gaming devices, inventions such as the 3-D printer, knick-knacks, and other off-the-wall curiosities. If you are an engineer, builder, or inventor at heart, then the World Maker Faire is for you.

There were also stands that sold art, handmade clothing, food, and drinks. I bought a couple of scarves because now that it’s getting a little chilly, a scarf is a growing necessity. I happen to love scarves as an accent piece on an outfit. It can add a pop of color or personality interest onto an outfit that I would otherwise deem as being dull. I also really loved Megan Nicolay’s workshop on how to transform a t-shirt. I have a fair number of them that I have because I was given those shirts from an event. I don’t wear them and don’t particularly care for them because they’re covered in the sponsors’ logo. But thanks to Megan, I’ve discovered that with a few snips of the scissors, I can transform them from a staid t-shirt to a cool and funky piece that I would love to wear.

My favorite part of the fair was the life-sized game of Mousetrap. It was absolutely awesome. All the different pieces that you put together in the board game of mousetrap is re-created in human-sized form. I remember spending hours playing that board game, so watching the lever being cranked, the bowling ball rolling down the chute, another bowling ball being sent up to fall though a hole in the elevated bathtub, a skeleton flipping into a tub, and instead of a mousetrap, a giant weight released onto a car was incredible. The video I’m posting is from when they were in Austin a few years ago.

Admission can be a little pricey, especially if you want to attend the whole weekend, but there are ways to get a discounted price by buying the tickets early, at certain Whole Food stores in the city, online, or by being a member of the New York Hall of Hall. 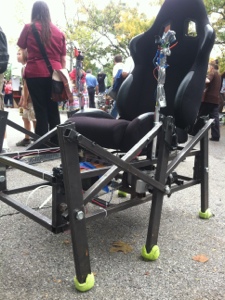 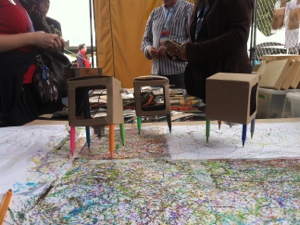