The Killers Concert and a Killer Good Time

Last Tuesday I went to The Killers concert at the Paradise Theater in the Bronx. I’ve been a big fan of The Killers for a long time and I was dying to see them live. I was rather disappointed that I wasn’t able to get tickets to their sold out concert at Webster Hall last July. When I found out that they were coming back in September, I went all out to make sure that I would get tickets.Five minutes before noon on the day the tickets were for sale for the general public, I was perched in front of my laptop constantly hitting refresh until the buy tix button was made available. Right at noon, the button appeared and I pounced on it. A few minutes later, I got my ticket and the concert was completely sold out. Yeah, there were no more tickets available five minutes after seats were made available. 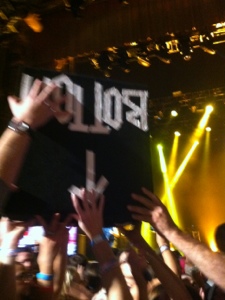 The Killers concert was going to be awesome. Werner Herzog, a German film auteur, was directing a live mini-documentary on the Killers during the concert itself. People could watch the concert live through YouTube. Herzog added some fun elements like the camera box that was tumbled and passed over our heads during the concert, like a giant beach ball. The camera was safely placed inside a large black box that had a cut out for the camera and the words “side,” and “bottom” glued to the black box. Some of what the camera captured was sent to the livestream. I imagine the images were rather chaotic because the box spent most of its time being passed, or rather almost thrown about, in the pit.

Usher: Do you want to go down to the pit?

Me (thinking: Is the Pope Catholic?): Yes!

The usher placed a bracelet around my wrist that gave me pit access. I scrambled down to the pit and before I knew it, I was in the heart of the action. It was absolutely fun and amazing to be down there singing and dancing away to one of my favorite bands. All throughout the concert, you could tell that Brandon Flowers, the lead singer, was having a great time with us. He radiated energy and was really singing and performing for us. We loved him, The Killers, and we showered them back with love by singing the lyrics on top of our lungs. The Killers played a medley of old favorites, such as Mr. Brightsides, and new songs from their recently released album, Battle Born.Towards the end of the concert, a shower of confetti fell on us. It was marvelous. 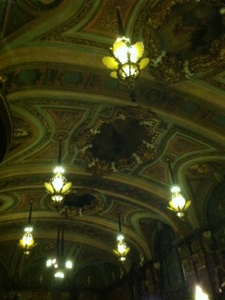 The Paradise Theater is a beautiful old-fashioned movie palace/event space. Several people stopped to take pictures of the Italian Baroque-style ceilings. Numerous cherubs could be found coyly peaking out of their perches on the balcony. I’m really glad that this building was saved and restored. There aren’t many movie palaces left like this in the United States.

Thursday night I was another fantastic run. Ben came over to Astoria. Earlier we had talked about my doing a 5-7 mile run at a 9:00 min pace. My legs were beat and tired from Sunday’s run and I wasn’t able to fully recover until Wed. I was worried that if I ran that long, then I wouldn’t recover in time. Ben offered a speed work instead. I thought it would be a good idea to do another quick run before Sunday’s half marathon. We headed back to Astoria’s track and I set out to do another 2.5 miles at a 8:00 min pace.

This run felt different from the last speed work. Last time, I mentally had to will myself to run the last 1/2 mile. This time, the entire 2.5 miles felt so much easier. Usually I used Ben to pace me. I know in the previous runs, if Ben hadn’t been there, I would have never met my target pace. I lag behind and I force myself to speed up and catch up to him.

This time, it was all very different. Even Ben noticed. I ran to my own metronome. I didn’t Ben to pace me. I ran 10 very even splits (7:55 to 7:59). In fact the last 5 laps felt easier than the first 5! I was breathing and working hard, but I didn’t feel like I was dying. At the end of the 10th lap, Ben announced my new PR of 19:36. For the first time when I finished the 10th lap, I finally felt as if I could continue this pace for the rest of the distance for a 5K. Previously I always thought that I would slow down a bit from the pain and exhaustion, but I felt so good. Everything was under control. I stepped off the track feeling absolutely marvelous. I feel like I’m in great condition and my last two runs have gone very well. I’m ready for fall racing season.