Thanks to Not Eating Out in New York, I found out about Mealku, an online meal cooperative where home cooks cook a batch of food and it’s delivered to your doorstep. The idea is that a group of home cooks trade meals with each other and because sometimes you cook and sometimes other people cook, the meals are free except for a small fee for delivery and other overhead costs, like the bags used for storing and delivering the food to you.The Wall Street Journal covered Mealku’s concept this past July.

I love alternative dining, such as this. I was a member of a now defunct underground supper and I’m always looking for new opportunities to dine that go beyond the latest restaurant. (Ben, this doesn’t mean I don’t still want to go to those restaurants. Ben reads my blog and I don’t want him to think that he doesn’t have to take me out anymore.) It takes an adventurous spirit to do these things because you’re trusting complete strangers. 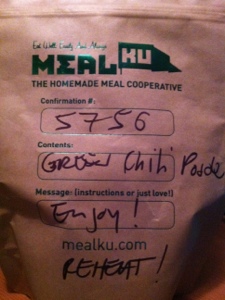 I went online to their website and they had a list of meals that were available for delivery for the next couple of days. Because this is a home-cooked meal, you can’t order for that night. You need to give them at least one day’s notice. They have all kinds of dishes available, such as lamb stew, Greek salad, Asian noodles, rabbit and and andouille gumbo, and desserts, such as flan and milk pudding!

I clicked on a date that it’s available for delivery in order to get more info about that particular dish. The ingredients and the basic technique for cooking are listed, along with the pseudonym of the home cook who will make your food. I ordered a dinner and then clicked a time window of when I would like the food to be delivered the next day. I got an email confirmation of my order a few minutes later and then the following morning, I got another email confirming the delivery time.

Because it’s a cooperative, it’s expected that members will both order and cook food. You gain points for cooking and those points can be redeemed for ordering. Although in the future there will be a small monthly fee, currently it’s in beta, so it’s absolutely free. I had to check it out.

Originally I ordered the Navajo Lamb Stew, but there was a bit of a mix up with my order, so I got the Green Chili Posole instead. I wasn’t upset about the mix up because the posole was my second choice. The food was supposed to arrive between 7:15  and 7:45, but they were delayed because the person cooking the food was running late. I got a phone call at around 7 pm letting me know what the situation. So I continued to wait eagerly and anxiously for my good (and I snacked because I was too hungry). I didn’t get the food until 8:15, but I was fine with this. 1) They’re in beta and things like this need be worked out, and 2) It’s free. It turned out that I was the first person to have ever ordered in Queens. Woot! I’m a pioneer in Astoria.

I got a large sealed brown paper bag that held the still warm posole (although I did reheat it up some more). I opened it up to find a large serving of a hearty pork and hominy stew. I wasn’t that hungry anymore because I had been snacking until my dinner arrived, so I ate about half of it. But the whole serving is a generous portion that would satisfy someone who was quite hungry. I loved the bag that they used to serve the dinners because the bag is useful in throwing into a microwave to reheat, so you don’t have to dirty a dish and also, you can reseal it if you only eat a portion.

I liked the bites of pork and hominy seasoned with cumin in this delicious stew concoction. The thin slices of jalapeno added a nice mild kick; I love spicy food. There’s something really comforting and homey about eating food that you know someone did just because they want to feed you. It’s not a job. They don’t have to do it. Just they do it because they love to cook, or they love to give, or they love to make people happy.

I wish Mealku all the best and much success to this venture. If you live in New York City, give Mealku a try.