What can I say? It was another beautiful day out on the Cape yesterday. We had a leisurely breakfast and then we dragged our kayaks from the front yard to the lake, which was all of 10 yards, if even that. We lazily kayaked and then swam a little to cool off. The water in Peter’s Pond is absolutely perfect. Clear and so refreshingly cool. This time we remembered to bring some refreshments with us! Because I’m not a big beer drinker, I got Crabbie’s, an alcoholic ginger beer. I love ginger beer and having an alcoholic version was terrific. 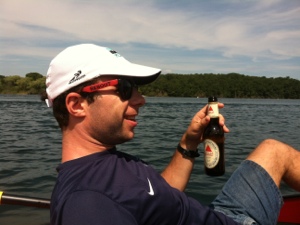 In the late afternoon Ben wanted to put in a good training run. I don’t run nearly as fast as him, so I thought it would be a good idea if I biked and he ran. We went to the Cape Cod Canal Bikeway, which is about a 7-mile paved bike path between Sagamore and Bourne. The bikeway covers both sides of the canal and the scenery is quite nice. On the canal, there are different sailing vessels. For whatever reason, I’ve always loved bridges and a view with a bridge (or two) is always magical. 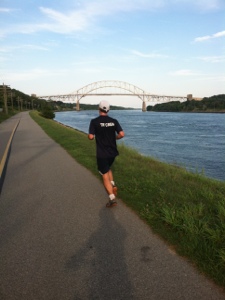 It was quite an interesting experience to be biking along Ben as he ran a sub 7-min pace during his tempo run. Normally when we’re exercising together, I’m the one who’s huffing and puffing and in pain, while Ben is breezing along. This time, I was the one yakking away, while Ben was working hard. I could hear him breathing hard and see him squinting his eyes in pain for five miles. In the meanwhile I coasted along on my bike. Seriously, I barely pedaled at all. Ben hadn’t put in a serious training run in a while, so he was happy about finally running again, but thought that he shouldn’t have felt like it was so much work at that pace. He’s used to running faster. I’m sure he’ll be back up to his old speed after a couple weeks of training.