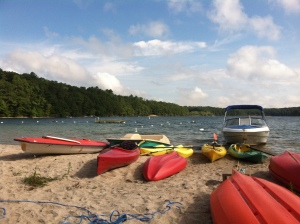 We had a quiet day today at the Cape. We’re renting a cottage by Peter’s Pond for the week. The house is in the words of the ad that we saw “ten steps away from a private beach.” Those words are no exaggeration. It’s a small clean quiet little beach for the locals.

The cottage we’re staying in comes with two kayaks, so this morning we decided to pull those kayaks out to the lake. We spent a couple of hours out on the lake, some kayaking, but a lot of lazing around. Ben even took a nap in the kayak at some point. The water in Peter’s Pond is really nice. The temperature is cool enough to be refreshing, but not icy cold that it’s difficult to go into the water. It’s also amazingly clear. After lunch, we both took a long nap. Apparently kayaking takes more out of you than we thought. 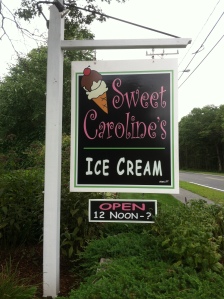 When we woke up, we were still feeling lazy. Only one answer for that – ice cream! We spotted Sweet Caroline’s when we drove in from NYC. I thought Sweet Caroline’s was a lovely ice cream parlor that had the nicest patio that I’ve ever seen for an ice cream parlor. The landscaping was immaculate and there were several wooden tables with large shade umbrellas and benches under trees to provide a welcome shade for the hot summer afternoons. They make their own ice cream. Ben and I shared a large serving of chocolate peanut butter and mocha chip. Overall Sweet Caroline’s provides a wonderful sweet treat. The ice cream was rich and creamy and had great flavor. The chocolate peanut butter had a large ball of peanut butter right in the middle of the ice cream. I would have liked it better if the peanut butter had been incorporated into the ice cream. Although the day was overcast, it didn’t deter people from coming here. While we were sitting and eating our ice cream, we saw several people drive up and then line up for their ice cream.

When we got back home, we decided to go for a run around in the neighborhood. We ran 2.7 miles (averaged a 9:34 pace) to a local beer store (in case we wanted to buy something later). I took that opportunity to get a water break and walk a little bit to relieve a side stitch that I developed. Then we ran back home at a slighter faster pace (9:01). The route had a few gentle inclines, so we got a little hill work in. It was a pleasant run, despite the side stitch. I’m still feeling a little tired and my legs are a tad heavy from yesterday’s bike ride, but it felt good to get moving.

Ben wants me to add that he saved me from a spider. It was a huge hairy black spider that was crawling up a wall. I screamed and Ben almost had a heart attack from my scream. I don’t like spiders in the same space of where I’m living. He thinks I overreacted to the spider. I calmly disagree.