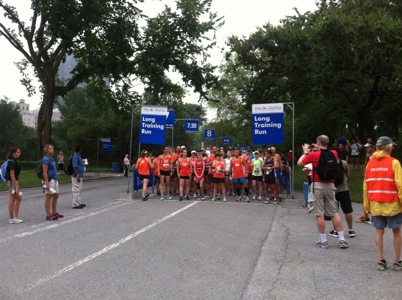 This morning Ben and I woke up early to join the New York Road Runners (NYRR) for a long training run in Central Park. Ben wanted to put in a long run before his NYC Ironman on August 11th. One of the great things about NYC is the incredibly large running community. NYRR is a well-run organization that puts on several races, including the NY marathon, all around the city. In addition, they also hold long training runs for those training for the (NYC) marathon.

I’ve never ran in one of these training runs before. It was an interesting experience because 1) I was in a large crowd of runners who were more or less going at a pace I wanted to go at (more on this later) and 2) there were pace leaders who made sure that the group kept at a particular pace.

Originally Ben wanted to do 16 miles at a 7:30 pace. I saw him off before I set off with my 9:30 pace group for an 11-mile run. Except for a couple short runs around the reservoir several years ago, I never ran in Central Park. I had heard from several runners, including Ben, of a great big hill in the northwest corner of Central Park. Because the training run was started around 103rd St on the east side, we would face this hill once at the beginning of the training run. I started toward the back of the pack because I wanted to be conservative. Being forewarned of the hill I wanted to be cautious. We approached the first gentle incline, a short descent, and then there was long gentle incline  and a long gentle descent. I kept on waiting for the hill to arrive. It wasn’t until I was halfway down the west side of Central Park that I realized that we had long passed the hill.

Sorry, I’m from San Francisco and nothing we ran in Central Park would qualify as a hill in SF. We would call that a flat course. I was heartily amused that so many runner gripe about “the hill” in Central Park. Pfft. . . it’s a walk in the park compared to what you can get in SF.

Although I started at the back of the pack, between Mile 3 and 4, I got bored with the pace and decided  to move up a bit. I tried to move through the pack, but it was a little too dense, so I ran around until I ended up just before the pace leaders. I was using the RunKeeper app to keep track of my distance and pace, but it wasn’t giving me accurate feedback on my pace. It was consistently 15-30 seconds faster than what I was actually running. I think between Miles 4-9 I was doing about a 9:20 pace.

Ben joined me at the 6-mile mark. He got a bit bored running slower than his usual pace and because it was a muggy morning, he decided to shorten his training run. Between Mile 8 and 9, is when I ran into some trouble. I wanted to see what I could do without any additional fuel. Ben mentioned that I was slowing to a 9:45, so I took a Jet Blackberry flavored Gu, which tasted like grape jelly. I felt a bit better, but I still hit a major wall. A little after Mile 9, I slowed to 11:00 pace. I picked it up a bit for Mile 10, but I ran much slower than a 9:20. I definitely need to have something sooner.

I am a little frustrated with RunKeeper. When I first downloaded the app in December, I was quite pleased with its accuracy. Lately, however, the accuracy was bit quite off. If I were a serious runner, it would seriously impact my training. The total distance it tracked was fairly accurate, but it lost me for a few miles towards the end, so when the GPS found me again, it had me “running” through the reservoir. The average pace off by 15-30 seconds (it was really off for my last mile where it thought I ran a 1:17 pace). The total time was recorded as 1 hr 25 mins and 35 seconds, when in reality Ben and I figured I probably ran for about 1 hr and 46 mins. I doubt I will continue using RunKeeper.

After the run (and a quick shower and change), we went to Enzo Custom Clothiers, so Ben could get measured for a custom fitted shirt. It was lots of fun looking over and selecting the cloth, the type of front and back, the collar, and the cuffs. The guy who measured Ben was really diplomatic and circumspect. Ben was still wearing his Garmin watch. When the employee measured Ben’s wrist, he politely inquired whether Ben regularly wore that watch with his suit. Ben quickly reassured him that he had no intention of wearing “such a horribly ugly watch” with his business suits.

We finally got back home around noon. We’ve had lunch now and are now enjoying a lazy Saturday afternoon of watching the Olympics.